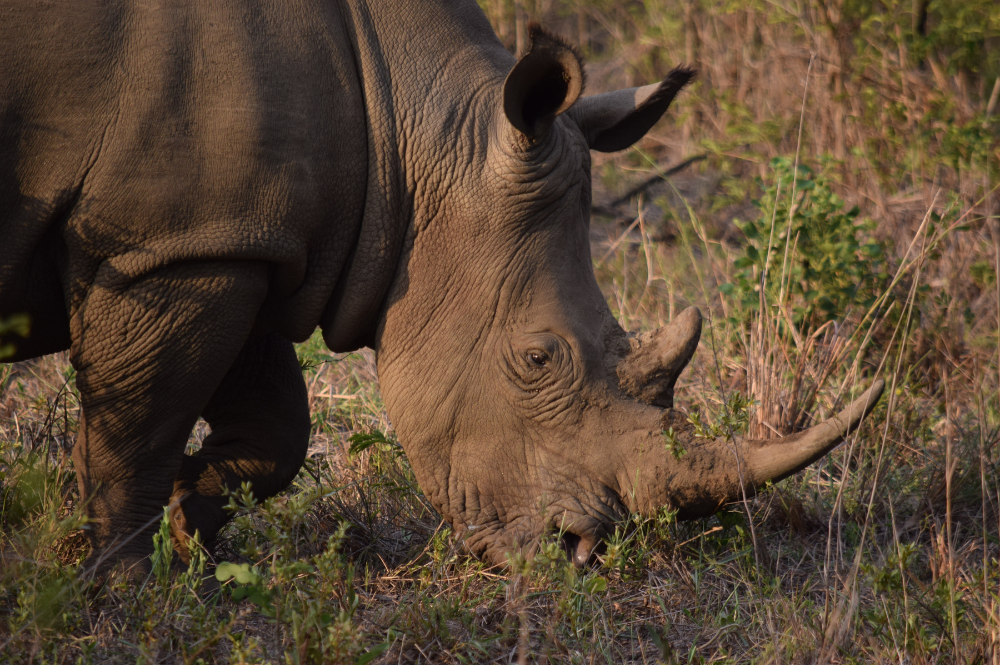 In the late 19th century, following decades of intense hunting, Southern white rhinos were thought to be extinct, until fewer than 100 were discovered in HiP.

Against the odds, dedicated people protected the remaining rhinos. Thankfully the population grew, and in time rhinos could be moved elsewhere, expanding the subspecies into other reserves in South Africa and beyond. Today, it’s thought that all Southern white rhinos originated from that one tiny HiP population.

More than a century later, the Park’s rhinos are once again facing an immense threat. The reduced rhino population within Kruger National Park has pushed poachers into new areas, and the north of KwaZulu-Natal (KZN) Province, where HiP sits, has been severely targeted by poaching gangs this year. Between January and September, reports suggest that 190 rhinos have been poached within KZN. During the first nine months of 2022, one rhino was killed every 35 hours in the Province.

The majority of these devastating poaching incidents have been recorded in HiP. The Park’s proximity to the Mozambique border, vast landscape, and dense rhino population have most likely all contributed to making HiP a prime target.

The awful reality is that HiP’s rhinos are under attack. And the brave people protecting HiP’s rhinos are fighting a tough battle to keep them safe. At any time, countering numerous daily poaching attempts takes its toll on resources. Right now, with rising costs and difficult economic conditions, it’s even harder.

Paying for simple things, like fuel for vital ground and air patrols and nutritious food for anti-poaching units, is a challenge. Thankfully, we’ve been able to provide some extra support to rangers at HiP.

With generous donations from donors like you, we were able to purchase 536 ration packs for HiP’s rangers between January and June 2022. These packs are not only providing essential nutrition but also helping rangers to remain motivated, effective and self-sufficient while they spend extended periods (8-12 days per month) camping in potential poaching hotspots.

Dirk Swart, Section Ranger at HiP shared, “If a reaction or call-out turns into a longer stakeout than anticipated, the packs mean that the field rangers can lie low, without constantly needing resupplies. The ration packs are a form of motivation too, as the meals are tasty and cover the rangers’ nutrition needs in the field.”

With your donations, we can provide more rations and essential equipment to Dirk and his team and help them to keep HiP’s rhinos safe.

The conservation success story from the 19th century shows that we can turn things around. But the situation is urgent. We must do everything possible to keep HiP’s rhinos safe and provide this vital rhino population with the time it needs to recover.

“Hluhluwe iMfolozi Park is currently on the frontline in the battle against poaching. More than ever before, your support is greatly appreciated and required to support the dedicated staff on the ground, who, day and night, continue to protect our black and white rhino, for future generations and the heritage of the world. With your support, we can make a difference.”

If you can, please consider a donation today.

One thought on “Protecting HiP’s rhinos”