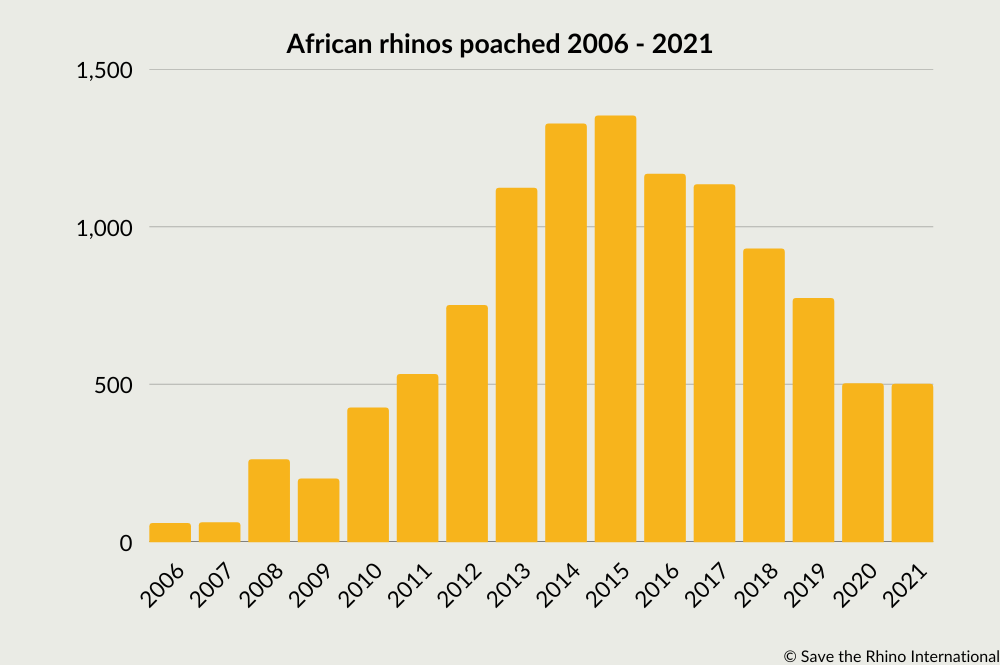 In the last decade, 9,885 African rhinos have been lost to poaching.

*The 2021 African-wide poaching figure is estimate based on current official statistics (these have not been released for all countries).

The current rhino poaching crisis began in 2008, with increasing numbers of rhino killed for their horn throughout Africa until 2015. Thankfully, poaching numbers have decreased across the continent since the peak of 1,349 in 2015. Yet, at least one rhino is still killed every day: there is a lot more that we must do.

South Africa holds the majority of the world’s rhinos and has been the country hit hardest by poaching criminals, with more than 1,000 rhinos killed each year between 2013 and 2017.

In 2021, 451 rhinos were killed in South Africa. It’s the first time in six years that the country has recorded an increase in rhino poaching incidents: an extremely sad reality. It’s likely that this change was due to the impact of the Covid-19 pandemic. As lockdowns were in force across the world, and in particular, curfew laws in place in South Africa, it would have been much harder for poachers to get into a reserve to kill a rhino and then smuggle its horn out of the country, without being noticed. Unfortunately, this meant that as those restrictions started to lift, criminal syndicates started to seize their opportunities to find rhinos again, causing poaching to increase by 13% since 2020. We’re thankful, at least, that the overall trajectory for rhino poaching in South Africa remains on its downward trend. But are gangs simply now moving elsewhere? Are there too few rhinos left in South Africa to find and then poach? What does this mean for rhinos?

Cathy Dean, CEO of Save the Rhino International, says, “In 2020 we were thankful that the pandemic had, at least, brought some good news for conservation. But these latest figures have confirmed our fears that the effects were short-lived. South Africa’s rhino population has dropped dramatically in recent years. And now poachers are moving into new areas that have been hit hard by Covid-19.

Many rhino reserves have only just about made it through the pandemic so far, with income from tourism, their main source of support, almost entirely cut off. Rhino security is expensive. Private reserves and national parks are struggling to have enough funds for everyday maintenance. Many simply won’t be able to protect their rhinos much longer if they can’t secure more funding. We’re extremely worried.”

Rhino populations, particularly in key strongholds such as Kruger National Park, in South Africa, have fallen dramatically. They’ve had no time to recover from ruthless poaching that’s taken place throughout the last decade. The long-term impact of the poaching crisis, and the extended periods of drought, are taking their toll. Without urgent action, their numbers could dwindle.

One of the challenges that the ongoing poaching crisis brings is that it diverts attention from other actions that are important for rhinos to thrive in the future. While anti-poaching measures are still a high priority, it’s important that we don’t forget the other tools in the box: biological management, community engagement, capacity building, national and international coordination, and putting in place the long-term sustainable financing needed for important rhino conservation programmes.

South Africa has by far the largest population of rhinos in the world and is an incredibly important country for rhino conservation. From 2007-2014 the country experienced an exponential rise in rhino poaching – a growth of more than 9,000%. Most illegal activity occurs in Kruger National Park, a 19,485 km2 of protected habitat on South Africa’s north-eastern border with Mozambique. Kruger consistently suffered heavy poaching loses, and so in the last few years, the government and international donors have channelled ever more funding and resources into securing the Park. Despite these extra protection measures, the impact of such intense poaching has caused Kruger’s rhino population to drop by 60% since 2013.

Kruger’s rhinos have declined by

Rhino populations are at tipping point. We cannot afford to lose any more rhinos: we must do everything possible to protect remaining populations to help their numbers increase.

It is extremely encouraging that South Africa is continuing to boost efforts to arrest and prosecute poaching criminals; stopping corruption and speeding up prosecution processes continues to be critically important if we are to truly tackle this horrific illegal trade.

The current poaching crisis actually began in Zimbabwe, where the difficult socio-economic and political climate facilitated rhino poaching. Once the easy pickings were taken in Zimbabwe, poaching gangs turned their attention to neighbouring South Africa, which in turn saw huge increases in poaching from 2009-2014.

rhinos have been poached in Africa

Around 2013, the South African crisis spread to other countries in Africa. First Kenya was hit hard: its worst year for poaching was in 2013 when 59 animals were killed (more than 5% of the national population). In 2015, both Zimbabwe and Namibia suffered losses: Namibia lost 80 rhinos to poaching, up from 25 in 2014 and just two in 2012, while in Zimbabwe at least 50 rhinos were poached in 2015, more than double the previous year. For Africa as a whole, the total number of rhinos poached during 2015 was the highest it had been in two decades.

How your support helps

We can’t protect rhinos without your help. There is no magic bullet to solve the poaching crisis: it will take a mix of the best tools we’ve got.

Having well-trained and equipped rangers is an important start. So too is secure habitat and good rhino monitoring, so that we know exactly where the rhinos are, and how they’re breeding. Making sure that the communities living near rhino habitats see and feel the benefits of conservation is another critical factor in preventing people from turning to poaching or encroaching on rhino habitat. Education is important – both in countries where rhinos live, but also in Asia, where consumer demand for rhino horn is highest. Captive breeding or intensive management for the rarest species is also vital to maintain genetic diversity and prevent the species from dying out.

With your support, we can decrease these poaching numbers in the future.

If you can, please consider a donation today.

can purchase a foam mattress for a ranger camping on patrol

could help purchase a ranger's uniform 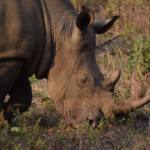 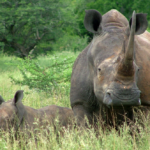 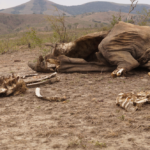 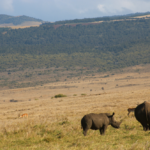