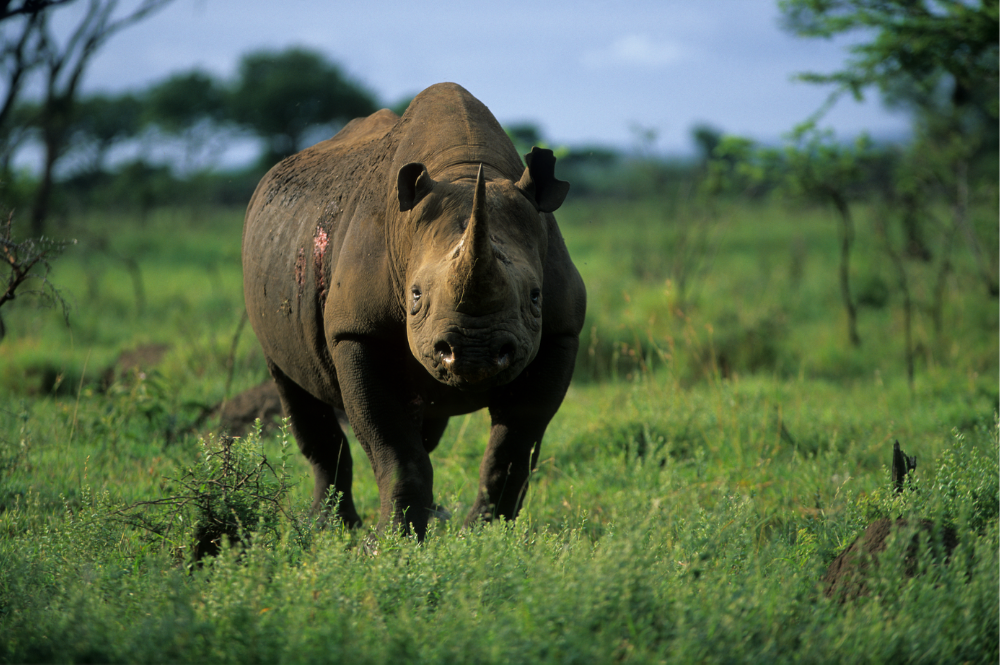 Fewer than 400 rhinos were poached in South Africa last year, according to the latest figures reported by South Africa’s Department of Environment, Forestry and Fisheries (DEFF) on 1 February 2021. While every poaching loss is heartbreaking, this total represents the sixth consecutive year of falling poaching numbers, and significantly, is a drop of one third as compared to 2019.

“Every 22 hours, a rhino was poached in South Africa during 2020. This is a welcome and much-needed decline since the peak of the poaching crisis, but we’re in an extremely worrying situation. Rhino populations have plummeted. They’ve had no time to recover from ruthless poaching throughout the last decade. As we step into the unknown of 2021, with huge financial strains facing South Africa’s reserves and parks, we’ve got to do everything possible to make sure that rangers have the skills, tools and motivation to keep going. We cannot afford to ease up.”

Of course, we’re relieved that there were fewer rhinos poached last year than in recent years. But, there are important questions to be answered:

As reported by the Environment, Forestry, and Fisheries Minister Barbara Creecy, Covid-19 and the related travel restrictions within and outside of South Africa no doubt played a role in the reduced poaching total. The risk of being caught while going out to finding a rhino would have been extremely high during a time of strict curfew rules, let alone the drop in the number of international flights that limited trafficking opportunities. Meanwhile, despite movement restrictions that also affected ranger deployments, rangers continued to carry out patrols 24/7. Anecdotal evidence indicates that, particularly during the first lockdown, criminals that might have been Level 1 ‘shooters’ in normal years turned to alcohol and tobacco smuggling, as being easier routes to a quick profit.

The total number of detected poaching attempts (i.e. attempted poaching  and ‘successful’ poaching incidents) has not been released, but there are some signs pointing to a general reduction in activity. In Kruger National Park (KNP), for example, it has been reported that there was a 21% decrease in poaching activity during 2020. Yet, it’s clear that incursions to the Park, and to other parks and reserves throughout South Africa increased when Covid-19 lockdown restrictions eased were eased, with 166 rhinos killed during the first six months of the year and 228 rhinos killed during the second half of the year. DEFF reported that the largest spike in poaching incidents at Kruger was during the month of December. Is this a product of months of unsatisfied demand, that is likely to continue?

Thankfully, the latest figures show that all provinces / locations but one (Marakele National Park, which had two rhinos poached in 2020, compared to one rhino poached in 2019, i.e. statistically insignificant when considering the size of the population) experienced a decline in poaching last year. The decrease was not evenly distributed however, and the smallest declines were seen in two areas where poaching pressure remains extremely high (Kruger, and KwaZulu-Natal). From our work with reserves and parks in KwaZulu-Natal, we know that rangers are dealing with up to six poaching incursions per day. They continue to need all the support possible: making sure that rangers are properly trained, equipped and motivated are all key aspects of our recent grants to our partners at Hluhluwe-iMfolozi Park and uMkhuze Game Reserve.

In short, no. Recent news around the total number of rhinos in KNP (which holds the largest rhino population in South Africa) made clear that there has been a dramatic fall in rhinos in the Park since 2011. At the latest count (2019), there were approximately 3,817 rhinos left in KNP (a 60% drop). While the total number of rhinos killed continues to fall, relentless poaching across South Africa since 2008 has not allowed rhino populations to recover. Now, we’re left with an extremely worrying situation: populations are plummeting, yet poaching continues.

Stopping poaching on the ground is only one aspect of making sure that rhinos are protected. It’s also critical that those responsible are held accountable and prosecuted. The DEFF reported that 156 individuals were arrested for alleged rhino poaching, and 45 court cases in which a verdict was reached led to 44 convictions. Successfully prosecuting poaching criminals is essential and, while there is always more work to do to in this area, we’re pleased to see that the Government has continued its work to disrupt organised crime and stop the illegal trade in rhino horn.

This reduction in the number of poaching incidents is a welcome step forward for rhinos in South Africa; one that hopefully brings some satisfaction to those working on the ground. Yet, we’re stepping into the unknown. Covid-19 interrupted rhino conservation efforts in the field, and funding for rhino protection during the coming year is uncertain, given the pandemic’s impact on the global economy and international government’s funding priorities. There’s no certainty that things will be back to ‘normal’ by the end of 2021. It’s vital that we continue to do everything possible to keep rhinos safe, grow their numbers through protection and careful biological management, and drive down demand for illegal rhino horn.