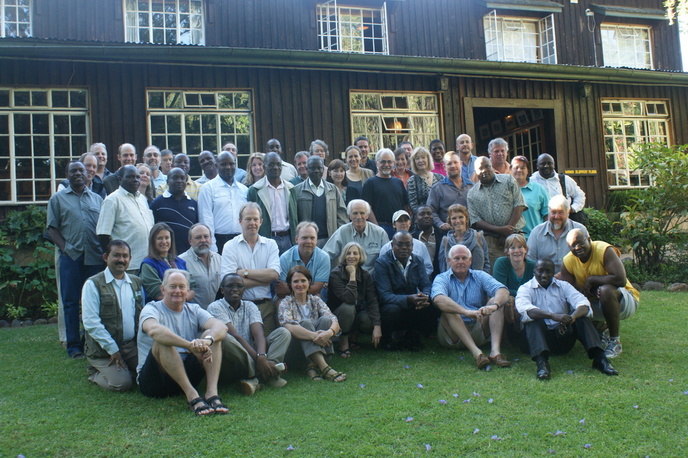 Save the Rhino had volunteered to coordinate the logistics for the 2013 African Rhino Specialist Group meeting held in February in Kenya. We’d already written the proposal to the USFWS RCTF that raised c. $32,000 for the meeting, contributed our own $17,000 and liaised with WWF-SA over its contribution to the meeting. So we were, by now, intimately acquainted with the list of participants, the costs and the agenda. Just how hard can it be, we wondered.

We got off to a cracking start. Susie, my Deputy Director, booked flights for  29 people attending from 17 different countries. All had to arrive and depart Nairobi within a narrow timeframe, so that we could coordinate the internal transfers. Some needed invitation letters in order to get visas; luckily Dr Mike Knight, Chair of the AfRSG, dealt with this. The other 33 made their own arrangements, which actually made things harder. Getting travel details out of them was like trying to find out whether that little church in Axum, Ethiopia, really does contain the Ark of the Covenant. Rhino people are almost all truly lovely and wonderful people, but they can and do move in mysterious ways.

Meanwhile, I was sorting the venue booking (the Naro Moru River Lodge near Nanyuki), the conference technical requirements and the three shuttle buses that would transfer us from the airport to the venue in each direction, to meet different flights. Fortunately, I had the help of the lovely Paula Okello at Let’s Go Travel in Nairobi, which considerably simplified all the payments. We were contending with the Kenyan general election, held on 4 March (10 days after we left), and it seemed that every politician in Kenya wanted to hold a rally at Naro Moru, so while waiting for participants who were paying their own way to book their rooms, we had to fend off other people wanting the same rooms we did. I don’t think rhinos and politics mix very well, so am glad we won those battles.

I am not even going to mention the job of sorting the room allocations (twin rooms sharing), except to say that it involved much colour-coding to indicate gender, marital status (some rhino peeps are married to each other) and ability to snore.

A week before we were due to fly, we heard, to our great regret, that the US Embassy in Nairobi had denied permission to travel to the USFWS African Program Officer. It was deemed to be too close to the elections and with the memory of the violence last time round, the Embassy didn’t want to take the chance of having US government personnel needing urgent evacuation. This was a great shame, as USFWS RTCF has been a fantastic supporter of African and Asian rhino conservation, and these meetings are a great way of catching up with everyone. And in the event, of course, there was no hint of disturbance in our bit of Kenya.

It was a great relief to get on the aeroplane at Heathrow and be done with logistics emails for 24 hours. An even greater relief to find the other 10 or so rhino peeps, who were to be on my shuttle bus, in the Karibu café, just outside the arrivals hall. The only downside was that our bus didn’t inspire us with confidence. It poured out so much smoke from underneath that we feared for our chances of reaching Naro Moru. We had long discussions over whether white smoke meant that our vehicle was about to burst into flames. Or was that black smoke? (Or had we just unwittingly elected a new Pope?) It was noticeable that in the villages we drove through, people turned to point and wave, not at the muzungus on the bus, but at the miasma billowing around us. Nevermind, we stopped at a supermarket, bought some beers and cracked them open. Sorted, and all by 10 am. We drifted downhill to the lodge on a last puff of exhaust.

As the day wore on, the other two buses rolled in and there were happy reunions. I’d last seen about half of the people back in Namibia, in November at the rhino technology meeting, but others I’d not seen for ages, and still others I’d never met before. A happy blur of faces and introductions, before the bar and dinner. We did rather take over both bars (one below the conference room and one up at the restaurant) and I felt for the other guests, most of whom were either about to climb Mt Kenya or who had just come down off the mountain.

Logistics during the conference were relatively simple: everyone was basically confined to the lodge, and it was too far from the village or from Nairobi for people to escape easily. Which is exactly why we’d chosen it in the first place. (One or two still managed nonetheless; you’ve got to admire these black-rhino-types – stubborn, solitary, makes its own mind up what it wants to do and does it…) Susie was kept busy chasing people to get their presentations loaded onto the laptop before each session and then zooming round the room with a microphone for the discussions after each; while I eventually adopted a high-visibility-Save-the-Rhino-vest-strategy, the better to usher people back in from tea and coffee breaks.

Day 4 was, in a way, my favourite. It was the field trip to Ol Pejeta Conservancy, which I’ve written about for the Spring 2013 issue of our magazine, The Horn, and which will be posted up on our website in April. It was my favourite partly because we saw rhinos, tracker and attack dogs and wild dogs, but also because we weren’t organizing it: Martin Mulama, Batian Craig and Ben Okita did a fabulous job of choreography. Susie and I could relax, take pictures, even feel like tourists!

In the end, everything worked out just fine. The strike at Lilongwe airport in Malawi was called off just in time for the Malawian national rhino coordinator to catch his intended flight home. The Botswana rhino coordinator missed her flight due to long queues at check-in and flew home three days later, although I was blissfully ignorant of this until much later. The feedback forms from the meeting praised the logistics, most liked the setting, the catering had mixed reviews ranging from “bland” to “great”, and no one complained about their roommate. Audibly at any rate.

More importantly, it was a fun, useful and productive meeting, with great – confidential – discussions about all matters rhino (that’s why this blog is about trivia rather than the important stuff). The IUCN issued a press release immediately after the meeting, which we’ve posted on our website, and the information / knowledge / experience shared at the meeting will be followed up over the coming months. Everyone at the meeting will have learned something of value, as well as contributing ideas.

Now the real fun starts. We have also offered to collate, edit and compile the meeting proceedings. Where’s that beer…?