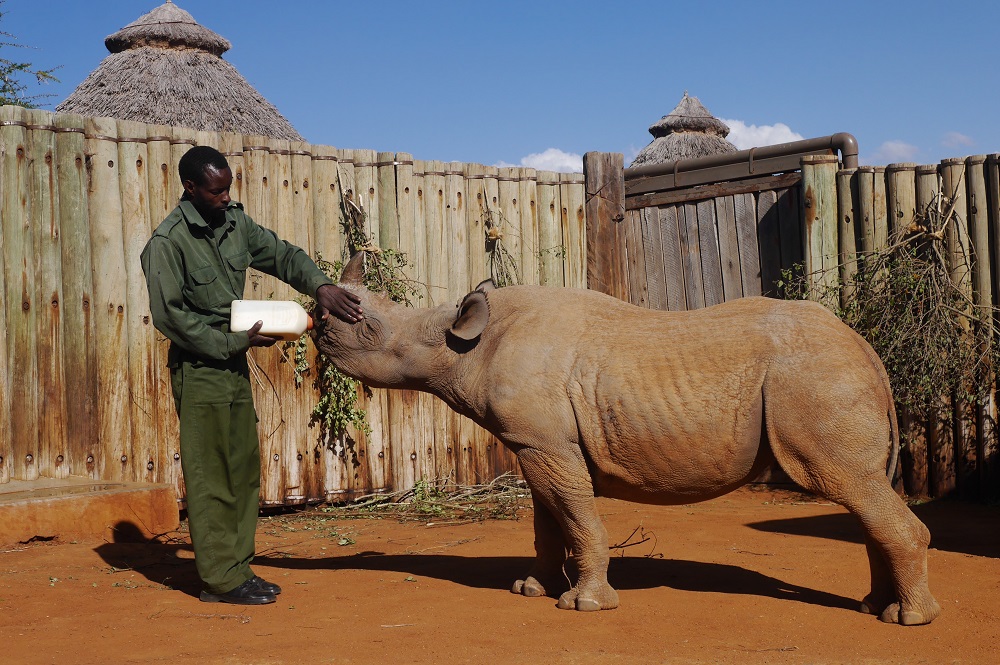 Whether it’s a routine scan or a more complex operation, we all know that medical procedures come with risks. Of course, this is no different for veterinary procedures on any animal, and when it comes to rhinos, the fragility of a species adds an extra burden of worry. With fewer than 6,000 black rhinos left in the world, when one suddenly falls ill or is found with significant injuries, it is important to react quickly and provide expert care to the vulnerable black rhino.

In the wild, black rhino bulls are extremely territorial. They will fight other males found in their territory, often causing significant injuries to each other. Last year, Muya, a black rhino bull at Ol Jogi Conservancy, had to be treated by vets after he sustained substantial injuries during a fight. When vets examined Muya, they concluded that the injuries were most likely caused by the other rhino’s horn. Thanks to the veterinary response, Muya made a full recovery and now continues to roam around Ol Jogi, hopefully staying within his own territory!

Another bull, Athi, was also treated at Ol Jogi, after a piece of wire became caught around his leg. Vets were able to remove the wire successfully and just like Muya, Athi also made a full recovery.

You may also remember a black rhino named Alfie from a recent blog; in 2012 rangers at Ol Jogi Conservancy realised that Alfie was blind. Alfie’s condition was likely something that he was born with and that he will live with for the rest of his life. Alfie is now cared for each day by rangers, particularly Peter, his main keeper. Alfie and Peter spend a lot of time together and Peter watches over Alfie while he roams outside of his enclosure each day.

All veterinary operations require extensive care and deployment of staff, aircraft and equipment. Thanks to funding from our supporters and donors, we were able to contribute towards these costs through the Black Rhino Emergency Fund, paying for veterinary medicine, darts, veterinary staff, aircraft and assistance of capture staff. The fund is made available for all black rhino emergency interventions for APLRS (Association of Private Land Rhino Sanctuaries) conservancies within Kenya’s Laikipia County, providing 50% of all costs incurred, making it possible for animals like Muya, Athi and Alfie to receive the treatment they need quickly, whilst also reinforcing joint initiatives between conservancies, such as rhino monitoring, protection and general best practice.

In 2018-19, we were able to support successful emergency interventions for four black rhinos, each needing veterinary or hand-rearing care: Alfie, Muya, Athi and another rhino, Lojipu. Lojipu was abandoned by his mother just after he was born in February 2017. With no adult protection, Lojipu, was attacked by an older dominant male and had to be moved to a sanctuary for hand-rearing and treatment. In June 2018, Lojipu was relocated back to Sera Conservancy, where he will be cared for closely by rangers before being fully released into the wider Conservancy!

Unfortunately, not all interventions are successful and sadly, in the past year, two black rhino calves died due to the severity of their injuries and illnesses.

Every time a black rhino is found in distress, the emergency fund provides conservancies with the ability to react without causing a significant economic burden. In turn, teams can give the very best care to support the rhino in the long-term. Each time a vulnerable black rhino’s health is restored, it brings more hope for the future of this iconic species.