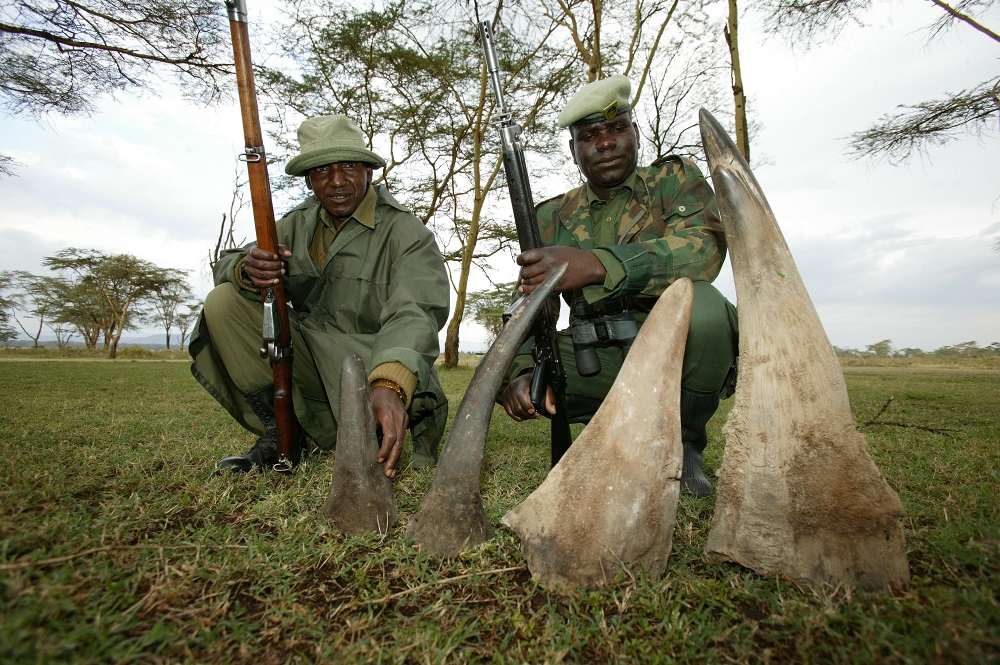 Why do stockpiles exist?

Many rhino horns in stockpiles come from natural rhino mortalities. When dealing with a rhino carcass, the rhino’s horns are immediately removed to prevent them being taken by poachers. Horns may also be seized by government agencies during law enforcement and arrest operations. Each country will have its own Standard Operating Procedures (SOPs) that dictate the process needed to securely store horns: government agencies will have central strong-rooms in confidential locations.

For private rhino owners, the horns are stored after each dehorning procedure or death of a rhino. Again, horns will most likely be stored off-site in a secure and confidential location, to reduce the risk of theft and danger to staff.

Zoos and wildlife parks are responsible for dealing with the horns of deceased captive animals that were under their care. Furthermore, there are many antique rhino horns and trophy mounts across the world in museums, galleries and within private collections; however, these are generally in smaller quantities than those in private, provincial or national stockpiles in rhino range states

Rhino horn stockpiles can’t simply be locked up and forgotten about.

At a global level, the development and implementation of robust stockpile management programmes is essential. Proper management of stockpiles can:

Due to the high value of rhino horn and the risk of horns being leaked onto the black market, there are lots of rules surrounding the processes and checks done on rhino horn stockpiles. Managing a rhino horn stockpile involves scrupulous record-keeping and auditing procedures in place, including weighing, measuring and cataloguing each horn and taking DNA samples. For rhino horns in South Africa, where international trade is banned but domestic trade is allowed, an efficient stockpile management programme can be a critical tool to ensure that trade is properly organised, regulated and monitored.

According to guidelines published by TRAFFIC in 2019, effectively managed stockpiles:

However, managing a rhino horn stockpile is a lot of work. Not only is it expensive and a security risk, rhino horns are difficult to keep in a good condition: as natural substances, rhino horns also suffer from damage, weevils and mites.

Should stockpiles be maintained or destroyed?

Since 2008, the demand for rhino horn has skyrocketed, presenting difficult challenges for those tasked with protecting rhinos and their precious horns, whether still attached to the rhino or not. Individuals, organisations and governments now have to deal with a tricky issue: should rhino horns be stored securely or destroyed? And if they are to be destroyed, then should this be done in a high-profile burning or crushing demonstration?

In recent years, governments including the US, France, China and the Philippines have organised public displays showing the destruction of ivory stockpiles, leading many to question whether the same should be done with rhino horn stockpiles too.

There are very high costs and dangers associated with the management of rhino horn stockpiles. With the soaring value of rhino horn, stockpiles present a large target for thieves and substantial sums are needed to ensure adequate security of the strong-room and to reduce the risk of danger to staff. For example, in April 2014, 112 horns were stolen during a night-time raid at South Africa’s Mpumalanga Tourism and Parks Agency, and in August 2019 34 rhino horns were stolen during an apparent burglary of a game farm near Etosha National Park in Namibia.

In countries or on reserves where there are limited resources or concerns about corruption, it may be better to destroy horns immediately, thus eliminating the risk of leakage onto the black market.

Those advocating the destruction say that the burning and crushing horns gains publicity and makes a political statement that rhino horn is worth nothing, that destroying rhino horn stockpiles sends a strong signal to the criminal networks that the smuggling of rhino horn will not be tolerated.

Others argue that the only reason for hanging on to horns is because of the possibility of a future legal trade in rhino horn; those not in favour of this tend to advocate for the destruction of stockpiles.

As referred to above, one reason why both private owners and state agencies may currently be stockpiling horns is the hope that an international trade in rhino horn will be re-opened. At the most recent CITES meeting (August 2019), a proposal by Eswatini advocating for international trade was voted down; however, a domestic trade is legal in South Africa. A future successful proposal to begin international trade would allow rhino owners to sell their rhino horns across the world and use the profits received to cover their spiralling security costs.

There are additional reasons against destroying stockpiles. Historically, rhino horns have been stored for record-keeping purposes and geneticists can recover DNA from horns that can be traced back to individual animals. Important learnings about genetic diversity in living and deceased animals are now informing rhino translocations. Storing genetic material like rhino horns maintains evidence on rhino mortalities that may be used in rhino-crime prosecutions: rhino horns recovered from poaching incidents are key pieces of evidence.

Several zoos have publicly destroyed stockpiles, such as Dvur Kralove in the Czech Republic. However, these are not always straightforward: a planned burn in North Carolina Zoo in the USA had to be postponed while legal issues concerning the destruction of state property were examined. Another issue is that such publicity draws attention to the fact that zoos may be in possession of valuable horns. If such displays are advertised in advance, then good security will be needed before and during the event.

Questions also need to be asked about the reasons why a burning / crushing event should take place. What is the objective behind a public event? Is it a publicity stunt? Is a public burn the best use of time and money? Some have argued that the burn will result in reducing the demand for rhino horn amongst East Asian consumers, but what is the message that will go to the criminal syndicates? And, can any impact on East Asian consumers be measured? There are real concerns that destroying rhino horns simply helps drive up the price of rhino horns, by making them even rarer and harder to buy illegally.

Finally, it is important to think of other uses of rhino horn rather than destroying them. For example, Save the Rhino was given a pair of horns a few years ago. When thefts from European zoos, museums and galleries began occurring, we became worried about the security of the horns and of our staff. We contacted the Metropolitan Police, who arranged for the horns to be donated to the UK Border Force, for use in training sniffer dogs at London airports.

Our conclusion is that rhino horns should not be destroyed unless there is a real concern about safeguarding their secure storage, in which case they should be destroyed in accordance with the laws of the country concerned, but with no publicity.

Furthermore, to reduce horns leaking into the illegal market, assist with ongoing investigations and better understand rhino biology for the future, an effective, robust stockpile management system is fundamental, whether the horns are to be destroyed later or not.