You are here: Home » Thorny Issues » Rhino conservation in zoos 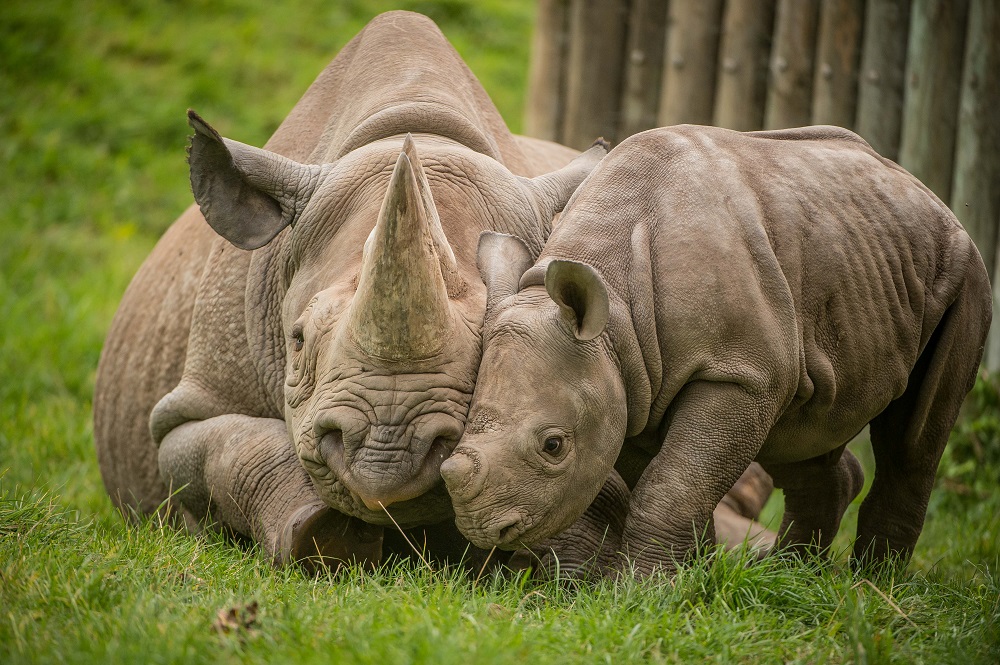 With an estimated 700 million people visiting zoos each year[1] (10% of world’s population), zoos have a large reach. By way of comparison, 700 million is double the amount of people in the world that speak English as their first language; it’s a lot.

Save the Rhino International works with zoos in a number of ways to further international efforts to conserve rhinos. Over the years, we have built successful partnerships with more than 30 zoos across Europe; partnerships that have shown real success and provided positive steps for rhino conservation.

Historically, zoos – or menageries as they were then called – were places for people to see animals from all over the world. But today, zoos have a much broader role. Zoos have evolved to become complex institutions, working day-in, day-out with a variety of animals and also specialising in a number of disciplines, including animal husbandry, health, nutrition, behaviour and records keeping.

We do understand, however, that there are challenges to conserving rhinos within zoo environments and that some people would prefer all animals to be wild. In this Thorny Issue, we discuss these challenges and how and why we work with zoos to further rhino conservation.

Challenges for rhino conservation and zoos

Ensuring high standards of welfare for any rhino in captivity is a must. Zoological associations such as the European Association of Zoos and Aquaria (EAZA) and the Association of American Zoo and Aquariums (AZA) publish Best Practice Guidelines for the three species of rhino held in their member institutions. While this will always be a challenge when an animal is not in its natural environment, research has shown that rhinos adapt well to captive living. To promote the safe and healthy keeping of rhinos, Save the Rhino only works with zoos accredited to EAZA or AZA.

There are also ways to enrich a rhino’s environment to ensure they are as relaxed but stimulated as possible. From wallows to hills, rhinos like a mixed landscape and this is important for their well-being. Rotating rhinos between enclosures, or holding them in mixed exhibits (i.e. with other compatible species) can be a helpful management tool. Providing the correct type of forage is another way to ensure healthy rhinos. In their natural habitats, rhinos feed on lots of different seasonal and regional plants, so it is important to ensure that they get the right balance of nutrients in captivity.

As discussed below, zoos work together in many ways and benefit rhino conservation in doing so. However, historically, there have been challenges. Early collaboration is important to ensure the future of a species is protected. Prior to 1985 (when international studbooks began), rhinos would be sold or exchanged between zoos with a lack of management for the population as a whole. In order to save a species long-term, this system was updated with online programmes established to better manage a species across zoos.

In 2017, a rhino in a zoo just outside Paris was shot and its horn removed by poachers[2]. This incident was a stark reminder that it is not only rhinos in Africa and Asia that are in danger of such attacks. In truth, there is no perfect safe space for rhinos, but every precaution and protection must be in place so that this is not the fate of any more rhinos held in captivity, and rhino-holding zoos have all been advised on how to improve their security measures.

The European Association of Zoos and Aquaria and the Association of American Zoo and Aquariums have established Taxon Advisory Groups (TAGs) for all the animal groups that are kept in EAZA / AZA member institutions, each group providing expertise and insight to keep animals in the best way possible and conserve their natural ranges. Within Europe and the Middle East, 370 institutions across 44 countries are members of EAZA. Of those, 122 EAZA members keep rhinos (figures ZIMS Data, June 2016). In America, there are 6,000 members of AZA, with 99 zoos keeping rhinos.

EAZA and AZA work with zoos and the specialist groups to develop Regional Collection Plans (RCPs), working to plan for and decide which species member institutions wish to keep, or wish to keep in the future, the reason for this and management of their captive populations. While only four rhino subspecies are managed in captivity, all rhino species are included within the EAZA population management planning. Four rhino subspecies are currently within the rhino RCP for AZA:

NB: The last Sumatran rhino (Dicerorhinus sumatrensis) in the US was translocated from Cincinnati Zoo in Ohio to the Sumatran Rhino Sanctuary in Indonesia at the end of October 2015.

Each rhino species is managed in a programme. EAZA’s European Endangered Species Programmes (EEPs) and AZA’s Species Survival Programmes (SSPs) are created for different species and run by zoos that have shown not only great interest in but also proved to have great knowledge of the species. These breeding programmes aim to conserve healthy populations of animals in captivity while safeguarding the genetic health of the animals. Such breeding might involve, more commonly, natural mating or, occasionally, Artificial Insemination (AI).

The programmes also illustrate how zoos and their respective associations can improve collaboration. Better collaboration can help conservation, ensuring that genetic diversity is upheld and best practice is shared across all areas of animal management and protection. This can be seen clearly through organisations such as EAZA, the British Association of Zoos and Aquaria (BIAZA) and other global and regional institutions. Not only does this help zoos themselves work together, but it can also connect rhino field experts to other programmes and improve capacity.

While we might like to think of every rhino in Africa being ‘wild’, this is not the case. In reality ‘wild’ is not so simple. There is a spectrum ranging from unfenced areas, such as the Kunene Region in Namibia – where some say the rhino population is truly wild – to others where there is plenty of room to roam but animals are fenced in and ‘extensively managed’. Beyond this, there are rhino farms or captive breeding operations across Africa (and elsewhere in the world), where animals are kept in paddocks and are much more intensively managed, in terms of mate selection, supplementary feeding etc.

Moves of rhinos from ‘the wild’ to zoos and conversely from zoos to ‘the wild’ occur.

The purchase of live rhinos from African and Asian rhino range states (i.e. the countries in which rhinos naturally occur) by zoos can take place under the rules of CITES (the Convention for International Trade in Endangered Species) as a live animal sale to an ‘appropriate and acceptable destination’ and any nationally applicable laws. If the destination is a zoo affiliated with the regional association, then such a move should be one that has been carefully thought through and takes all necessary security and safety procedures. Imports of rhinos are usually to do with diversifying the genetic base of the zoo population or to address demographic imbalances. For EAZA programmes, the purchase of live rhinos from range states no longer occurs.

There have also been several moves of rhinos from zoos to rhino range states, with one successful translocation in June 2019, moving five Critically Endangered Eastern black rhinos from zoos in the Czech Republic, Denmark and the UK to the subspecies’ original habitat in Rwanda. Such ‘reintroductions’ (although in this case, all the animals were zoo-born) can repopulate areas where rhinos had gone locally extinct, boost numbers of a new population to a viable level, and / or increase genetic diversity within a population. When relocating a rhino from a zoo back into their natural range, it is vital that the animals are able to adapt to the wild. This is a process which takes time and can be difficult, but it is essential for their survival.

Of course, any relocation must take adequate safety measures but, when done correctly, ‘rewilding’ of captive-bred rhinos can bring many benefits for park ecosystems, tourists and local communities.

Without a doubt, for zoos in the USA and Europe this is one of the key priority areas of work. Many zoos have dedicated education departments, working with neighbouring communities and schools to teach children and adults about all elements of wildlife and the environment. Chester Zoo, for example, mentors, monitors and evaluates the black rhino-focused environmental educational programme Rafiki wa Faru in Tanzania. Building this knowledge can harness a sense of care and protection, giving hope for the future conservation of rhinos and other wildlife, both globally and closer to home.

Rhinos in captivity have afforded many opportunities for detailed research that would not be possible in wild populations. Such information has led to improvements in reproduction for the Sumatran rhino, fertility for artificial breeding techniques – as with Northern white rhinos – and knowledge on the best ways to address disease, such as iron-storage overload[3].

The zoos Save the Rhino works with help provide vital funds for rhino conservation in rhino range states, i.e. the countries in which they occur naturally. For the programmes in the field, this financial contribution is extremely welcome.

Zoo support is not just about cash contributions. Many zoos share their knowledge, experience and expertise with people in the field. Taronga Zoo and Cincinnati Zoo, for example, have supported the Sumatran Rhino Sanctuary with its successful reproduction of Sumatran rhinos.

How Save the Rhino works with zoos

We see first-hand the benefit of zoos to rhino conservation. To ensure the best outcomes for rhinos, we work only with zoos affiliated to the official associations of BIAZA and EAZA, giving us peace of mind that all animals will be well looked after.

Together with our zoo partners, we are able to provide expertise for research and collaborate to raise vital funds with the zoos and their supporters. Most recently, Wilhelma Zoo Stuttgart has committed to giving $100,000 towards the Sumatran Rhino Rescue Project: a species it is extremely unlikely ever to hold in its collection.

We believe zoos have an incredible role to play in conserving rhinos and sharing more information about these great animals with the public. Engaging supporters of all ages is crucial if we are to save rhinos for future generations, and zoos help raise awareness – after all, without a zoo, how many Europeans would ever have come face-to-face with a rhino, apart from those wealthy and lucky enough to travel to one of the rhino range states?

Fundamentally, we believe that zoos help improve the chances of conserving all five rhino species and they have real value in rhino conservation. We are proud of our partnerships with zoos and their high ambitions for rhinos. Thanks to them, last year (2018-19) we raised more than £94,000 for field programmes in Africa and Asia.