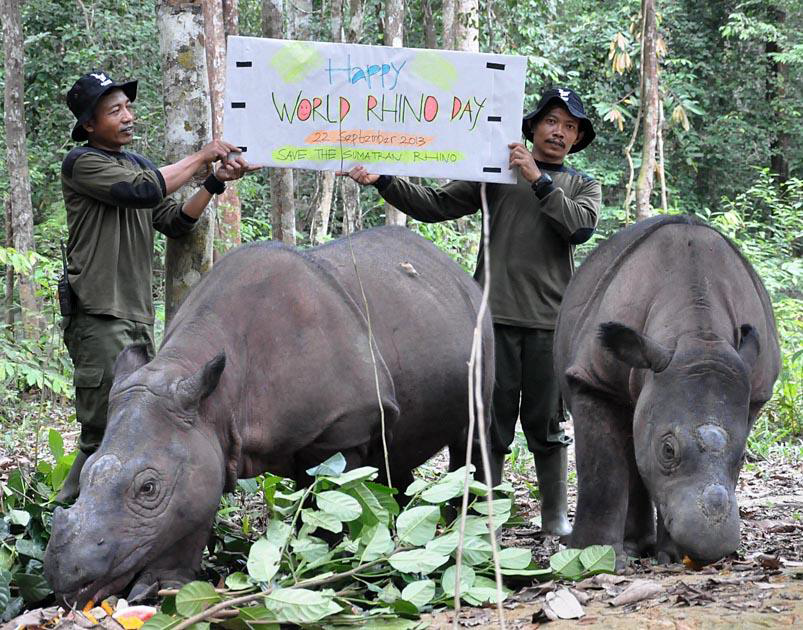 2013 has been a tough year for rhinos all over the world. With the escalating poaching crisis, all five rhino species are at extreme risk. Along with poaching, habitat degradation and human encroachment remain big threats for the three Asian species;:the Javan rhino, Sumatran rhino and the Greater one-horned rhino.

In April 2013, the Sumatran Rhino Crisis Summit opened with the shocking news that rather than 130-190 Sumatran rhinos as previously estimated, there are in fact fewer than 100 individual animals.

But there is hope: advances in scientific and reproductive technology, pioneering new habitat areas, translocation efforts, and increasing collaboration between governments demonstrate that we do have a chance to save these critically endangered rhino species from the brink of extinction.

Our great friend and partner, the International Rhino Foundation, has sent us an update on the 2013 activities of the Asian rhino programmes we help co-fund in India and Indonesia. Read on to find out more……

India has experienced a challenging year for its rhino populations, with increasing concerns for the country’s Greater one-horned rhinos after rising poaching levels and deteriorating security situations in many of the National Parks and Wildlife Reserves.

Manas National Park is a focus of the Indian Rhino Vision 2020 programme, which  aims to increase the total rhino population in Assam to 3,000 by 2020. Since the programme was launched in 2006, 21 rhinos have been released in Manas, including three rescued and sent to the Centre for Wildlife Rehabilitation and Conservation. So far there have been nine rhino calf births in Manas; however six rhinos have been lost to poaching.

– increasing levels of protection in national parks and wildlife sanctuaries
– ongoing habitat restoration
– establishing a team in India to draft a national rhino conservation plan
– setting a target for a total population of 4,000 in three countries (India, Nepal and Bhutan) by 2020
– studying the degradation of rhino habitat due to invasive alien species
– establishing an international intelligence network to enhance law enforcement efforts
– increasing cooperation in the management of trans-boundary protected areas to ensure an annual population growth rate of at least 3%
– and building support for rhino conservation in communities surrounding protected areas

Throughout 2013, seven four-man Rhino Protection Units (RPUs) have continued daily patrols and surveys of Indonesia’s Bukit Barisan Seletan National Park, which is around 875,000 acres in size. A further five RPUs have been patrolling Way Kambas National Park which covers around 320,000 acres. These Parks are home to the critically endangered Sumatran rhino, of which less than 100 are estimated to remain. The Park also contains many other threatened species including tigers and elephants.

The RPUs have a vital role in preventing poaching; there have been no Sumatran rhino poaching incidents since 2006, when a rhino was killed in Way Kambas. The teams often discover and destroy large cable snares set for large mammals.

The RPUs have also helped deal with episodes of human-elephant conflict and have also intercepted and arrested two poaching gangs that had entered the Park at night to hunt sambar deer.

Andatu, the male calf born at the Sumatran Rhino Sanctuary (SRS) in June 2012, continues to grow healthily in both size and independence from his mother Ratu. Keepers are now trying to separate them for two short intervals each day, as ultimately they will live in two different forest enclosures.

At some point in the future, after separation, Ratu will be reintroduced to the adult male Andalas (who fathered Andatu), so they can attempt to breed again. In the meantime, the SRS vet Dedi Candra continues to conduct regular ultrasound examinations on the two other females, Bina and Rosa, and organises introductions to Andalas when they are receptive to breeding. Andalas has been able to mount the females, however he has not impregnated them yet. Sumatran rhinos are notoriously hard to breed.

The SRS was heavily involved in celebrating World Rhino Day on September 22 this year. School children from neighbouring towns and villages attended presentations from the Sanctuary staff and RPU rangers and made banners displaying their support for rhino conservation.

Click here to read more about the Sumatran Rhino Sanctuary or click here to make a donation.

Work continues on the Javan Rhino Study and Conservation Area (JRSCA) in Ujung Kulon National Park, which is the final stronghold for the critically endangered Javan rhino, of which only 35-44 are estimated to remain in the world.

The construction of a permanent base camp is underway for the RPUs (left). The predominantly local village workforce is also building a perimeter fence along the eastern boundary of the JRSCA (below). The fence will help protect the forest habitat from human encroachment and other illegal activities, along with helping separate Javan rhinos from both domestic cattle and Javan banteng (an endangered species of wild cattle). The fence will also help protect habitat restoration plots that have been cleared of the invasive Arenga palm species (that rhinos do not eat) and regenerated with native plants that rhinos prefer in their diet.

Since work on the habitat restoration plots began, the area is being frequented by around six to eight rhinos on a regular basis, who appear to have found the new feeding opportunities.

Many thanks to the International Rhino Foundation for providing the information for this article.