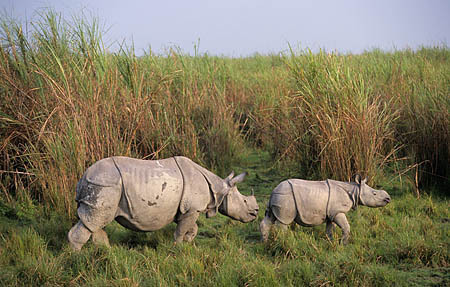 Since the start of 2012, eight greater-one horned rhinos have been illegally killed in India, prompting concern of rapidly increasing poaching rates. Over the past month there has been extensive poaching in and around the Kaziranga National Park in Assam state, where 21 rhinos were killed last year. Assam police say that rebels are becoming increasingly involved in rhino poaching in the state, where the greater-one horned rhinos are being killed using AK-47 assault rifles.

In most occasions the poachers have escaped with the rhino’s horn, however on one occasion intervention by forest guards has prevented the poachers from taking the horn. In a separate incident, following a tip off, police found a huge quantity of rhino skin in a house in Assam. Two people were arrested in relation to the incident.

In addition to the Kaziranga killings, another rhino was killed this month in

Manas National Park. The rhino was one of 18 translocated from Pobitora Wildlife Sanctuary to Manas as part of Indian Rhino Vision 2020. This is the third rhino poached in Manas, with the last killing in March 2012. It is a devastating blow to the park, which experienced a large-scale destruction of wildlife during the 1990’s, but has since been prized on its conservation efforts.

This week protestors took the streets to express their anger over the recent spate of killings, some took to burning a image of state forest minister Rakibul Hussain. Meanwhile, the Assam government has ordered an inquiry by the Central Bureau of Investigation (CBI) into all incidents of rhino poaching in the State in the last three years. There have also been transfers of senior forest officials in relation to the poaching incidents.

Despite the tragic news, it is programmes such as the International Rhino Vision which allow species such as the Greater one-horned rhino to make a comeback. The programme still has high hopes that the target of 3,000 rhinos will be reached by 2020. Click here to read more about the Indian Rhino Vision programme and also watch a new fantastic video update ‘From Pobitora to Manas’ which follows the journey of the translocated rhinos and the collaborative efforts made to establish this new population.