You are here: Home » News » Orphaned rhino calf gets a new companion 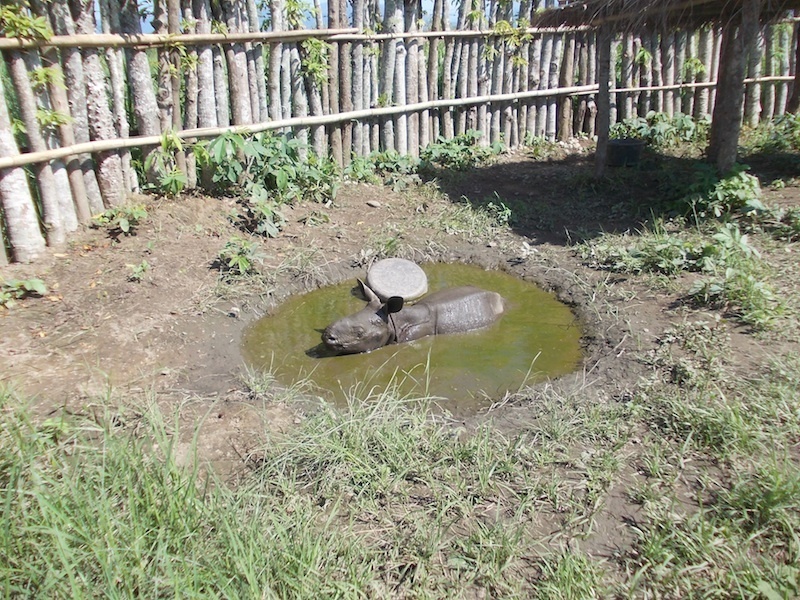 In April this year we brought you the sad news of a young Greater one-horned rhino, who was left orphaned when its mother was killed and dehorned by poachers in Manas National Park, India.

Luckily the orphaned rhino was quickly rescued and transported to its own enclosure within the Park, where it has since been hand reared by experts. The orphaned rhino is now over 2 months in age and doing well in health.

A special boma was quickly constructed for the calf with support from the IRV 2020 programme. The enclosure has a holding area of about 120 sq.ft and is three layered – wood, barbed wire & electric fence and the total enclosure size is about 160 sq.ft.  The holding area has one water holding facility and one shade facility.

The calf is monitored on a daily basis and hand fed eight times each day by dedicated keepers under the supervision of rehabilitation experts and a team consisting of veterinarians, park officials and members of WWF-India’s rhino team.

At the end of June, a rescued rhino calf named Purabi was moved from a rescue centre in Assam to join the orphaned rhino calf. Purabi was separated from its mother in 2012, during serious floods in Kaziranga National Park, and was rescued by the Assam Forest Department and local people. Sources at Manas National Park said both the calves would be kept together for a few years before being released in the wild.

“We are happy that the rhino calf is doing well in its enclosure. The calf is a symbol of hope now for the rhinos of Manas and we will do our utmost to ensure that it survives to adulthood and can eventually be released from the enclosure to join the free ranging ones in the park”, said Mr. Suresh Chand (IFS), PCCF (Wildlife) and Chief Wildlife Warden of Assam.

During the past month, two more rhinos have given birth in Manas National Park. However, there is still a large threat of poaching. Rhino 17, the mother of the orphaned calf, was the fourth translocated rhino killed by poachers in Manas in the last two years and the 16th rhino killed in Assam so far this year.

We have more good news to share from Manas National Park; a rehabilitated rhino named Jamuna, has given birth to a calf. Jamuna, was rescued as a three-month old calf during the annual floods in Kaziranga National Park in June 204 by the Assam Forest Department.

This is the seventh birth in the Park and is evidence that the males translocated to the park under the IRV2020 programme sucessfully mated with the area’s female rhinos, despite recent poaching incidents. It also shows that the translocated rhinos adapted well to their new environment.

Click here to read more about the Indian Rhino Vision 2020 and click here to make a donation to the programme.