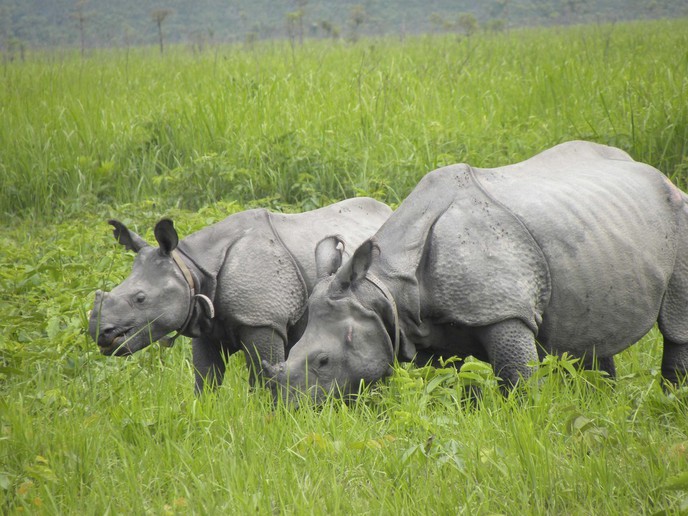 A translocated Greater one-horned rhino has given birth to a calf in Manas National Park. The exciting news was confirmed by park officials, who said that ‘Rhino 17’ (as the mother is known) gave birth to a healthy baby on Wednesday 20 March. Mother and calf were first sighted by park rangers on Saturday 23 March and are said to be doing well and adapting to their environment comfortably.

This birth marks a great success for Manas National Park, as ‘Rhino 17’ is part of a translocation programme ‘Indian Rhino Vision 2020’ (IRV2020), and was only introduced to the park last year in March, moving northeast to Manas from Kaziranga National Park.

Astoundingly, this marks the second successful breeding for the programme in the last six months, with ‘Rhino 8’ (also translocated from Kaziranga in January 2011) giving birth to a calf in September 2012. Park officials are thrilled at the success of the program so far, and state that the news of these births means that the translocated rhinos are adapting to their new environments well, particularly with the results of their speedy breeding!

The IRV2020 project aims to increase the population of rhinos in Assam, India to 3000 by the year 2020, and conduct projects such as this throughout India in order to move rhinos from parks of higher poaching risk, to parks such as Manas that are better equipped to protect and monitor them. So far, a total of 18 rhinos have been moved to Manas National Park from Kaziranga National Park and Pobitora Wildlife Sanctuary as part of the program incentive.

There has been some good news from Kaziranga National Park recently also. As part of a thorough census conducted every two years by park rangers, 39 more rhinos were counted this year on March 24, in addition to the findings of the previous census, bringing the overall count up to 2,329 rhinos.

Nevertheless the threat of poaching continues to endanger the species of the Greater one-horned rhino in India, and another rhino was killed in Kaziranga National Park on Saturday, raising the death toll to 17, according to reports so far this year. However, the news of these two births is a promising step for the species, and poses encouraging results for the IRV 2020 program and Manas Park authorities, as they continue their rigorous efforts to replenish the species count across Indian Wildlife Parks.