You are here: Home » News » A taste of paradise in India 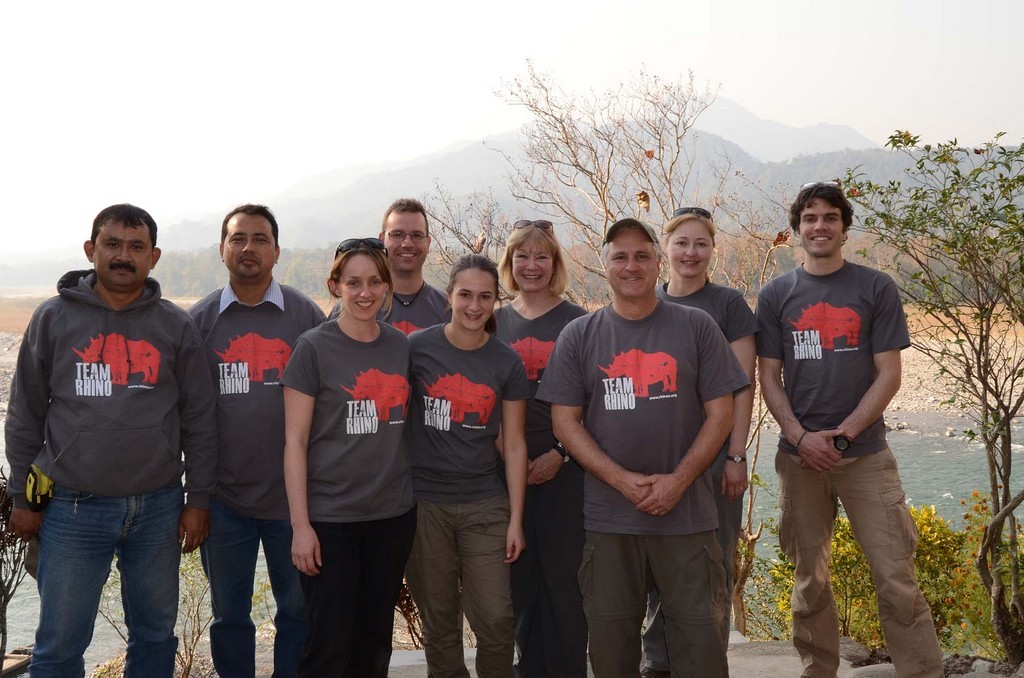 I wanted to work in conservation due to my love of animals and wildlife, but the strange thing about working in conservation sometimes is that you spend very little time with the animals that motivated you to do the job in the first place. Luckily my trip to India was a rhino-filled experience.

I visited Assam in India as part of a trip organised by our lovely friends at the International Rhino Foundation (IRF). The trip was led by Dr Bibhab Talukdar, IRF’s Asian rhino programme coordinator and by Dr Susie Ellis, IRF’s Executive Director. Other members of the group were Bill Konstant, Programme Manager for IRF; Kelly Russo who manages IRF’s web marketing; Stefan Hoby, a vet at Basel Zoo; and Roland Schweizer and Noemi Rauber, who are both keepers at Basel Zoo. The reason for me to go on the visit was to meet all the members of the Indian Rhino Vision 2020 programme, a programme that SRI has supported since 2006; to understand the latest status and discuss how SRI should best support the programme going forward. We started our trip in Guwahati in Assam. Like many Indian cities it is over-crowded, colourful, noisy and dirty with development and growth everywhere.  Guwahati is the gateway city in Assam to the national parks; all Assam’s rhinos reside in national parks and are owned by the Government.

Our first destination was Manas National Park. Once you leave the city the road is lined with small villages and non-stop farm land to feed India’s growing population. The lack of land available for wildlife to survive on is one of the biggest threats to India’s wildlife; this is one of the areas IRV2020 is trying to address. The journey is also filled with cows and goats just wandering across the road, there are no obvious rules to the road, but amazingly the drivers mostly seem to manage to miss the animals and each other. In contrast to the surrounding areas, the national parks are like a little taste of paradise showing what wild India must have been like – truly beautiful. Manas is the home to the first rhinos translocated in IRV2020, starting in 2008, since then a total of 22 rhinos have been translocated through the IRV2020 programme and by the Centre for Wildlife Rehabilitation and Conservation.  It is also a special place for SRI as this is the place to where most of the charity’s fundraising for the IRV2020 has gone to help with the rhino translocations. It didn’t take long before we encountered our first rhino, a 2-year male called Ramu who had been hand reared and so he was quite comfortable around people, as long as we didn’t overstep our welcome (a bit like a grumpy teenager really). This was not only a great photo opportunity but a chance to take in the sheer size of the GoH – and this was only a young male! I took at least 100 photos of Ramu as he was my first encounter of a GoH rhino, at least 5 of these weren’t blurry or of his bum. (I seem to accumulate a lot of images of animals’ bums as they walk away from me; I don’t think wildlife photography would ever be a career option for me.)

After this we went to meet two orphaned rhino calves. The orphans were being looked after in a boma (an enclosure for animals) as their mums had died in floods in Kaziranga. They weren’t related to each other but were comforting each other after the trauma of losing their mums. The male calf was called Doimalo meaning ‘Brave’; the female calf was called Purabi which translates as a music note in Hindu music. The forest staff took great care in rehabilitating these calves so that one day they can eventually be released to the wild. This is just one of the many duties these guys are working tirelessly to do. Each national park has numerous guard posts where the forest staff live for 15-20 days away from their families so that they can patrol the park monitoring all of the animals before they swap with another team. At several of the guard towers I noticed markings around the legs of the guard posts (the towers sit on tall legs) and I was shocked when it was explained that these were marks showing how high the water had reached each year when the floods come. Now I am not a tall person at 5ft 4, so I’m probably not the best measure but most of these markings were well above my head. Some years the forest staff can get stuck in the towers until the waters reduce down; it is also the time when the rhinos move to higher ground, sometimes roaming out of the parks to do so. It just shows what a tough landscape these guys have to work in. The remainder of our time in Manas National Park was spent visiting the guard towers and viewing wildlife, we saw tonnes of birds, antelope, the odd ele and even a black panther (melanistic leopard) but the rhinos were incredibly hard to find, which with the increasing threat of poaching in the Park is not a bad thing.

The National Park is surrounded by various communities, many from different ethnic backgrounds. Rhinos were poached in Manas in the 1990s during ethnic conflicts and consequent poor law-and-order, it is therefore essential that the local communities see the benefits of having wildlife in the National Park. MEWS (Manas Ever Welfare Society) is a local conservation and ecotourism not-for-profit that bring benefits to local people through various schemes. We were lucky enough to visit one of the villages that had benefited from the work of MEWS. Susie Ellis from IRF had purchased two piglets through one of the MEWS schemes for the village, which seemed like a good idea until she had to pick up one of the wriggling piglets for a photo opportunity, they weren’t quite so photo happy as Ramu. The idea of the scheme is that a family is given two piglets, which they rear and look after. The family keeps 70% of the piglets that are born and give 30% to be given back to MEWS, which then donates the animals to another family. Poaching is increasing again in Manas as the threat of poaching is escalating in all rhino range states so the work of MEWS is invaluable if we are to keep the support of the local people.

We were all very sad to be leaving the peace and quiet and beauty of Manas National Park but at least we knew the next stop was Bura Chapori Wildlife Sanctuary and the world-famous Kaziranga National Park where most of the Manas rhinos originated from and which I will talk about in my next blog.

Deputy Director of Save the Rhino International

2 thoughts on “A taste of paradise in India”