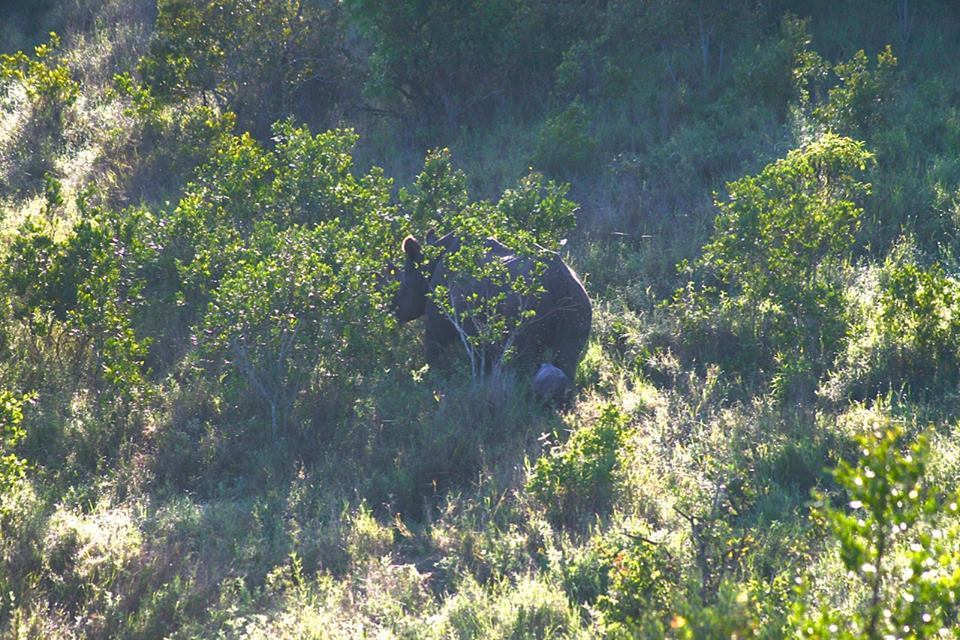 Earlier this week Borana Conservancy, Kenya, announced that a black rhino calf was born to one of the female rhinos recently translocated to the Conservancy. This is incredibly exciting news for Borana and the wider rhino conservation efforts in Kenya!

Rhinos are incredibly good at concealing pregnancies, and the first signs of the pregnancy came earlier this week. On Tuesday, staff witnessed the female black rhino and her sub-adult calf gently steering away a pride of lion (see image below). Later that evening, the pregnant rhino gave birth to Borana’s first black rhinos in over 50 years. The sub-adult calf has already moved off on his own, and was spotted apart from his mother for the first time on Thursday.

The new mother is rather shy at the moment, and keeping her calf well hidden in the bushes. But you can catch a glance of the tiny newborn in the top photo, where it is trailing behind its mother.

21 black rhinos were translocated to Borana Conservancy in August 2013; 11 were received from neighbouring Lewa Downs, and a further 10 from Nakuru National Park. This was the first time that rhinos had roamed in Borana for over 50 years. The translocation efforts are incredibly important, coming at a time when Kenya urgently needs more suitable, secure habitat for its black rhino populations.

A range of international donors helped fund the rhino translocations, including the United States Fish and Wildlife Service, Save the Rhino International and Zurich Zoo with additional technical and financial input from Borana, Lewa and the Kenya Wildlife Service.

Click here to read more about the recent rhino translocations

Click here to make a donation to Save the Rhino, to help fund programmes such as Borana Conservancy.