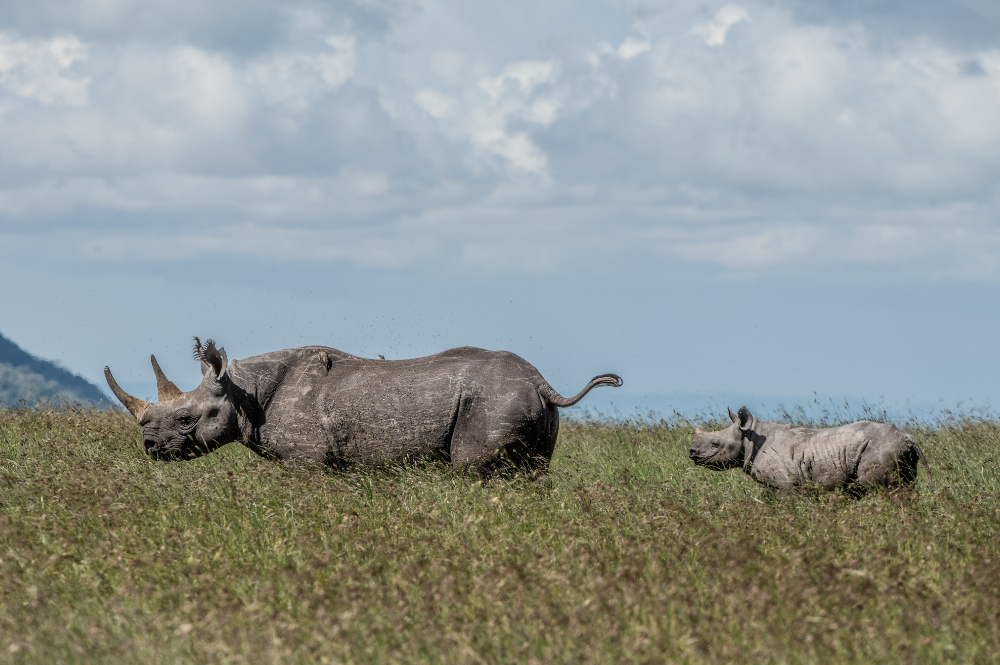 Earlier this year, the Kenyan Wildlife Service announced that no rhinos were poached in Kenya during 2020 – the first ‘zero poaching’ year since 1999. But, that isn’t the only good news that 2020 brought for Kenya’s rhinos. During July and August last year, two black rhino calves were born at Borana Conservancy, and the monitoring team is hopeful that there will be another calf coming soon!

Borana is one of Africa’s newest rhino conservancies, and one of its most successful. Black rhinos were reintroduced to Borana in 2013 – the first time that rhinos had roamed on the land for more than 50 years ­­– and now their population is growing.

In 2013, the dividing fence between Borana and its neighbouring Conservancy, Lewa, was taken down to open up a combined 92,000-acre new sanctuary: the Lewa-Borana Landscape, connecting the adjoining ecosystems and providing more space to boost Kenya’s rhino population. This was a huge undertaking, made all the more worthwhile when, soon after the rhinos had settled into their new surroundings, new rhino calves were born. Today, the Lewa-Borana Landscape hosts 12% and 14% of Kenya’s black and white rhino population, respectively.

Despite these successes, the poaching threat continues across Kenya. The team at Borana must remain diligent in their efforts to protect the precious wildlife that lives within the incredible Borana habitat. Your generosity has helped to cover crucial everyday costs to ensure that rangers can continue their vital work to ensure a healthy, thriving black rhino population at Borana. This includes ‘ear notching’ four black rhinos and one white rhino on Borana, and supporting the process across the Lewa-Borana Landscape in March last year before the pandemic hit.

Ear notching is a process whereby unique V shapes are carefully marked on a rhino’s ears, enabling rangers and rhino monitors to identify different animals more easily. Thanks to these ear notches, rhino monitors could report that a number of white rhinos moved across the former Lewa-Borana boundary, highlighting the importance of this identification process and the success of connecting these two habitats.

Additionally, to support rhino monitoring efforts, two rhino monitors attended a photography course, led by Nikon, at Lewa, and are now taking fantastic photos of many rhinos, helping to evaluate the health of the animals year on year.

During an extremely challenging period due to Covid-19, your donations have been even more important for Borana’s rangers. Thanks to your support, the latest additions to Borana’s herd have a bright future ahead.