You are here: Home » News » Is it luck? Boosting black rhinos in Namibia 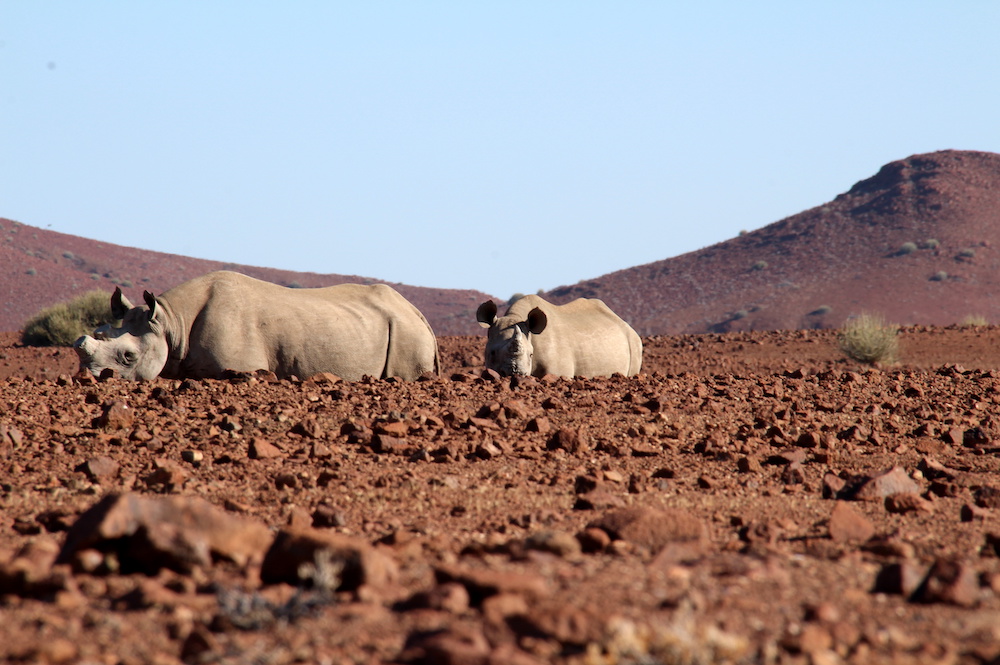 Blue skies, bright sunshine, a gentle, warm breeze: it’s a description that could match many places on our incredible planet. But today, we’re talking about the vast, wild and remote Kunene region in north-west Namibia. It’s a place where, if you’re lucky, you might catch a glimpse of a black rhino.

Except, it’s not about luck, really. Twenty-five years ago, black rhinos across Africa were on the brink of extinction. More than 95% of their population had been wiped out by poachers. If you had been in Namibia at that time, there would have been fewer than 400 black rhinos, and spotting them would have been extremely difficult. It’s thanks to years of conservation activities by people all over the world that the black rhinos of the Kunene region have trebled in number since that time, and at the forefront of those conservation activities has been Save the Rhino Trust (SRT).

SRT was founded in 1982, with the aim of reducing poaching and saving Kunene’s rhinos from extinction. Their approach has been simple but highly effective: offer poachers a more secure livelihood as wildlife monitors and guards, benefitting wildlife and the wider community.

Achieving that aim takes a lot of hard work and dedication. Each day, SRT’s Rhino Monitors head out on foot in search of black rhinos. When a rhino is spotted, ID forms and profile cards are used to gather data such as the rhino’s age, sex, ear notches, horn size and shape, body condition and body scars. Back at base, these reports are logged into SRT’s database, providing a detailed picture of all the rhinos within the Kunene region, improving everyone’s understanding of any changes in the population. As you might imagine, the distances covered during these patrols add up; in 2019, SRT’s trackers covered a phenomenal 25,451 km on their foot patrols, recording more than 3,406 individual rhino sightings!

In the past year, the population has continued to grow: several black rhino calves have been spotted. This good news shows the importance of rhino monitoring and protection; it’s not down to luck, thriving populations of wild rhinos are the result of consistent action by people passionate about wildlife. Unfortunately, Covid-19 has put all of this hard work at risk.

As Simson Uri-Khob, CEO of Save the Rhino Trust, says “The world has come to a standstill, but conservation has not. Despite the pandemic, our trackers are out in the field monitoring the critically endangered black rhino. Ninety-seven percent of SRT employees are rooted in these communities. They are conservancy members and community leaders. Their skills are passed to other community members, and their income goes to change lives through providing for education and financial support for their families in these remote areas.”

Without tourism, the Trust – like many conservation organisations – has lost vital funding and has had to scale down its activities. Still, the poaching threat remains. In April 2020, after an impressive zero-poaching record since 2017, two rhinos were killed by poachers in the Purros area of Kunene. There’s no doubt that restrictions in movement due to Covid-19 played a role: with fewer rangers able to work and no tourists around, poachers are able to move more easily.

Despite this set back, and the huge impact of Covid-19, the team at SRT are doing everything possible to keep going, protecting and monitoring the incredible black rhinos across the Kunene landscape. Thankfully, the Namibian Government is doing the same, with more than 278 rhino poaching suspects arrested between mid-2018 and August 2020. With their continued dedication, and the support of people around the world who care about Namibia’s wild rhinos, we’re certain that this population will continue to grow. A huge thank you to all of our partners and donors – conservation isn’t often about luck, but we feel very lucky, and very grateful, to have your support.