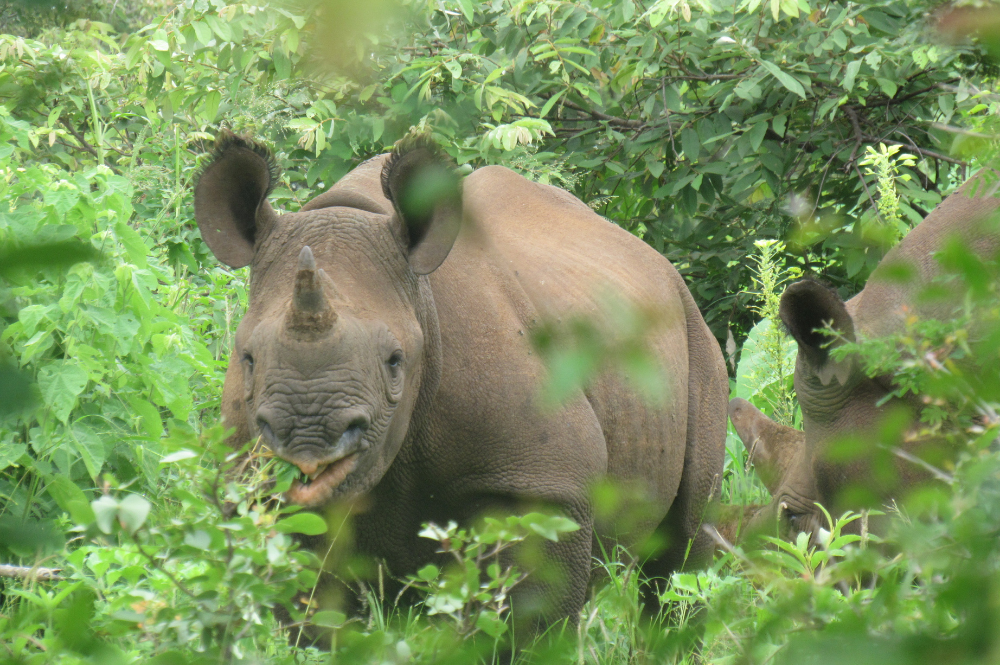 To keep healthy black rhino populations, we’ve come to realise that you need to keep a lot of “+ ones”.

This success comes from decades of partnership between many varied individual players at many different levels: from the strategic policy and planning effort needed to enable the formation of private rhino conservancies of the Lowveld in the first place; to the daily monitoring and management of the rhinos; and to the relationships between the individual rhinos themselves.

The Lowveld Rhino Trust’s (LRT) mission is to significantly increase the number of rhinos and extend their secure range in the Lowveld region as flagship species for biodiversity conservation and wildlife-based land use through hands-on conservation work and strategic planning. To achieve this, LRT focuses its efforts on areas that can accommodate more than 100 black rhinos, because, at this scale, rhinos (and other species such as African wild dogs, for example) are better able to establish and maintain their natural social structures and consequently, breed better.

Siabuwa is a good example. Moved to the South-East Lowveld from the Zambezi Valley in 1992, she and her offspring have maintained their natural long-term social bonds in the large conservancy settings. Her daughters and granddaughters are producing their first calves as young as five years old (seven is considered normal) because they are comfortable in their social networks. Siabuwa’s family tree numbers 30, in 30 years.

It is this good breeding performance that has made it possible for these large Lowveld populations to succeed, despite the poaching pressures of the last decade and a half. In some years poaching losses have been as high as 9%, yet the growth rate has been as high as 11%. Maintaining consistently high biological growth rates comes from maintaining large population bases. Individual rhinos in these populations can establish extensive social links, and these relationships enable them to maintain good breeding performance.

Millie was orphaned at five months old after her mother was killed by cyanide poisoning. At this young age, she required bottle-feeding for another year, and a further year in the hand-raising facility before she was big enough to go back into the wild. Millie was released along with three other hand-raised orphans. Ten years later, she still associates closely with Sassie, the other female orphan with which she was released, and has so far had three calves.

Mabuya was another one who required just a bit more than your average amount of standard management effort. Unable to see or smell after being shot in the head by poachers, Mabuya would certainly have died without help. Remarkably, she somehow ended up in front of a tourist lodge (in the 3,000 km² of Bubye Valley Conservancy she had to wander blindly in!) and was rescued. Understandably distressed by her new predicament and with a healthy dislike of humans (this was now the fourth poaching attempt she had suffered), she took her time to settle into presenting her head calmly twice daily for eyedrops. After eight months of boma care, hope that her eyesight would recover was abandoned. Mabuya was cautiously released back into the bush in the belief that her exceptional senses of smell and hearing would compensate for her lack of sight. Steadily she mapped out her new home, likely made easier by the fact it was an old cattle farm with water points regularly distributed at crossroads. Watching her now, you would be hard-pressed to work out she can’t see. She has successfully raised one calf in her new area, and we are hopeful of many more to come.

Pumpkin is our most recent special “+ one”. Shot through her front legs and chest at barely a year and a half old, it was astounding that she could even stand, let alone challenge the lions feasting on her mother’s carcass. Without question, she would have died if left in the field. Fortunately, with a little help, young bodies heal fast, and within weeks her wounds were closing cleanly. Before she had even left the bomas, Pumpkin was establishing new social connections. Within weeks of her arrival, a young orphan called Rocky (he also defended his mother’s body from lions) started visiting the bomas every night to get to know the new girl in the neighbourhood. Who knows, maybe Pumpkin and Rocky will go on to add their progeny to the South-East Lowveld black rhino family tree. The least we can do is give them that opportunity.

Written by Natasha Anderson, Monitoring Coordinator, Lowveld Rhino Trust. A version of this article was originally printed in our annual supporter magazine, The Horn.