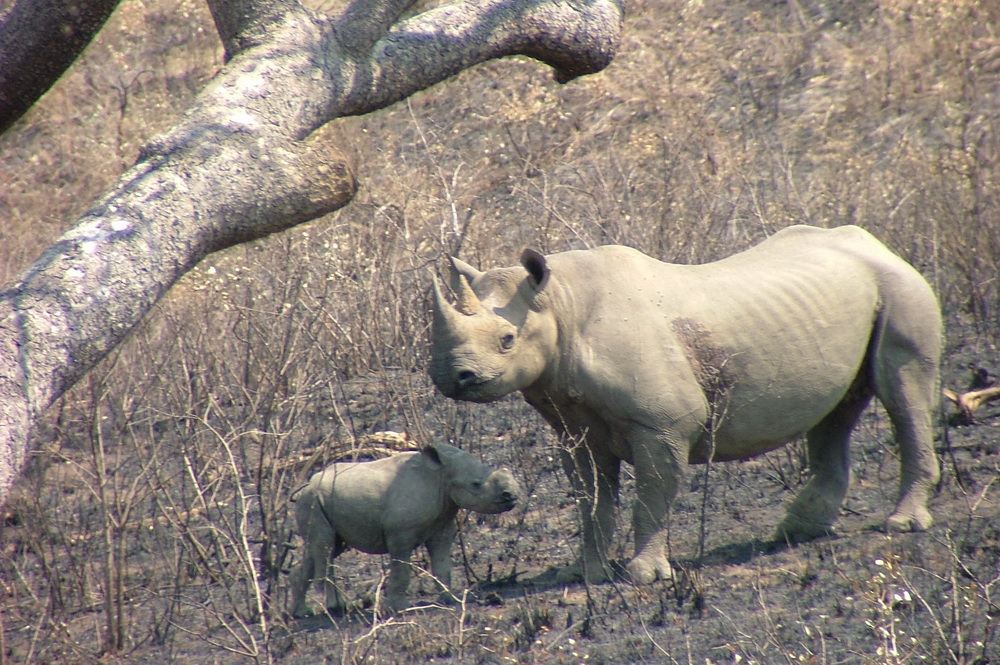 South Africa is home to Earth’s largest rhino population, yet this accolade is something of a poisoned chalice; the country’s rhinos are a prime target for poachers. Kruger National Park, in the northeast of the country, bears the brunt of rhino poaching, partly due to the difficulties of monitoring and patrolling the massive area covered by the park (it is 19,485 km2). But it isn’t only Kruger’s rhinos at risk. Parks and reserves in nearby regions, such as KwaZulu-Natal, which is further south, also require considerable security and anti-poaching strategies to keep their rhinos safe.

KwaZulu-Natal borders Mozambique and is close to the Mozambican capital, Maputo, a notorious base for poaching syndicates. One of the parks we support in this area, Hluhluwe-iMfolozi Park (HiP), has suffered from intense poaching attacks in recent years, threatening the future of the Park’s black and white rhinos. Reducing illegal activities in the Park requires well-trained rangers and rhino monitors with access to efficient and up-to-date equipment.

Thanks to the generous donations from you and a number of our partners, we have provided extra support for Hluhluwe-iMfolozi’s Savannah S Light Sport Aircraft, which allows rangers and monitors to keep a closer eye on their rhinos. As you might imagine, the running costs of the aircraft can add up and we have been able to cover essential costs such as fuel, maintenance and repairs, as well as purchasing small tools and spares to service the aircraft. Between April 2018 and March 2019, the plane completed more than 225 flight hours, assisting with anti-poaching activities, such as aerial surveillance and rhino-carcass detection, alongside biological monitoring of the Park’s black rhinos!

Your donations have also helped to purchase rhino horn microchips, camouflage caps for rangers and law enforcement equipment for staff working in the field. HiP’s rangers are now better equipped and prepared to combat the rising tide of poaching attacks. But they can always use a helping hand, especially from furry friends!

A Canine Unit was recently re-established within the Park, aiding rangers with their anti-poaching activities. The new dogs have been trained to track signs of poachers, such as footprints. Each dog performs daily exercises with their handlers, ensuring they are ready to be deployed at a moment’s notice.

In 2018, 769 of South Africa’s rhinos were poached. This was the first time in five years that poaching mortalities in the country dipped below 1,000, and this is definitely a welcome sign. Yet, 769 rhinos lost is still much too high: it is an unsustainable level of fatalities. Our work with Hluhluwe-iMfolozi is helping to increase the protection for rhinos in the Park, but there is still more to do.

Alongside our partners, we continue to provide resources for Hluhluwe-iMfolozi, increasing their capacity and ability to protect every rhino. Thank you so much for your support. A special thank you to a number of our zoo partners who help us fund the vital work at HiP.