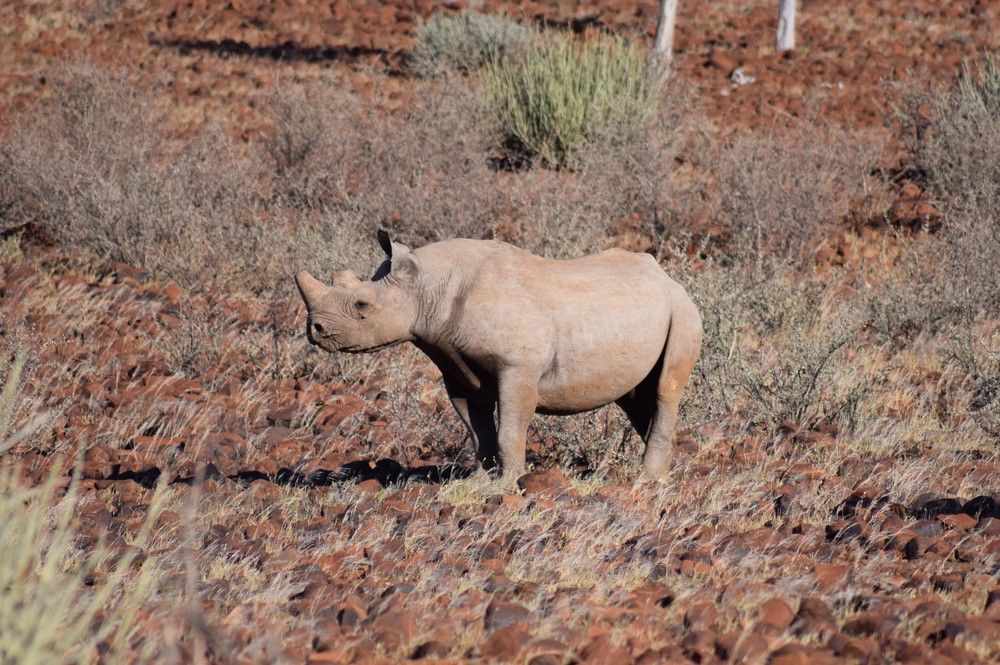 Boots at the ready, fresh air and that crisp feeling of a cool morning as the sun begins to creep in and warm everything up.

If you’ve put your boots on recently to walk outside, you know exactly what we’re talking about. Rangers do too.

Namibia’s rhino trackers have a daily routine patrolling their area, monitoring rhinos and keeping them safe. Their rhinos are a ‘must-see’ on every patrol, as the rangers at Save the Rhino Trust (SRT) keep an eye on the desert-adapted black rhinos that call Namibia’s Kunene region home.

Since 1982 SRT has worked tirelessly to protect this sub-species of black rhino within the northwest of Namibia. They are particularly special because of their unique adaptations to a desert way of living; eating usually-deadly plants (such as the Euphorbia shrub) and surviving without water for two or three days without damaging effects.

After many years of intense poaching in the 1980s and then again since 2008, we’re really pleased to report that no rhinos were poached at SRT for the whole of 2018. Given the size of the area (25,000 km2 – larger than the size of Israel!), keeping the rhinos safe is no simple task.

The SRT team uses a few approaches to ensure they can monitor their rhinos as closely as possible, including working with local people to develop knowledge and improve foot tracking and using monitoring tools such as GPS, mapping software and digital cameras. Together, these methods are helping SRT to better understand and keep a watch on all of their rhinos. Now, 81% of the rhinos are spotted each month, giving rangers and rhino monitors the chance to check them over from a distance and know they are safe.

SRT’s rangers spend three weeks at a time out in the bush to monitor their rhinos. After being dropped off in the field, teams continue on foot for daily patrols across difficult terrain, receiving supplies every five days. With the increased risk of poaching and the danger this presents for rangers, tracker teams now patrol alongside armed Namibian law enforcement officers.

“We are delighted to report that throughout the region protected by Save the Rhino Trust, poaching has declined more than 80% since 2014 – thanks to a lot of hard work and support improving our rhino monitoring. Save the Rhino Trust doesn’t monitor its rhinos alone – it’s a team effort. Rangers based at the conservancy currently provide more than a third of overall rhino sightings.” Simson Uri-Khob, CEO of Save the Rhino Trust.

So when you’re next out for a walk, think of how different that walk might be as a ranger or rhino tracker in Namibia, out looking for their precious rhinos.

Thanks to your support, we’ve been able to provide funding to ensure that SRT can keep up their important work and do even more crucial patrols.