You are here: Home » News » Bolstering pride and performance through awards 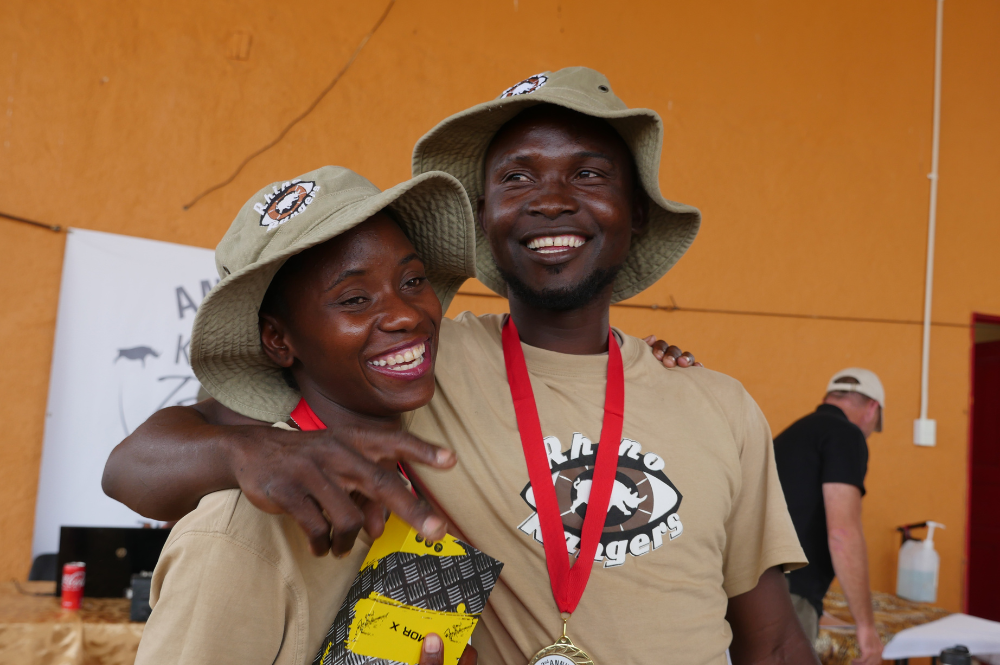 Namibia’s Kunene Region, located in the northwest of the country, is home not only to an important population of unique black rhinos (they’re specifically adapted to cope with the incredibly dry conditions), but also to small communities. Working alongside every community is Save the Rhino Trust (SRT), a Namibian NGO with a mission to “protect the desert-adapted black rhino in order to ensure security for these and other wildlife species, a protected habitat, and a sustainable future for local communities long into the future.”

Established in 1982, Save the Rhino Trust was formed to reduce poaching and save black rhinos from the brink of extinction. Their approach was simple but highly effective: offer poachers a more secure livelihood as wildlife guards. After four decades of SRT’s pioneering efforts and collaborations with the Namibian Government and local people, the black rhino population of Kunene has grown steadily in size. Today, the Region is home to the last truly wild population of any rhino species on the planet; the largest to persist outside national parks.

SRT’s work has been a great success but also poses a challenge: how can a small organisation with a couple of dozen trackers, patrol an area some 25,000km2? The answer has been to work with the communal conservancies across Kunene to develop a special Rhino Ranger Programme. During the last few years, SRT has trained many conservancy rangers in rhino tracking – no small feat when you look at the desert landscape, when a stone out of place might be the closest thing you get to an actual footprint – and identification skills.

These rangers have been a brilliant “force multiplier”: an extended team of rangers who know the landscape like the back of their hands, who recognise each individual rhino, and who are highly motivated to protect the rhinos and, through them, to attract more tourists to the area.

This motivation has been fostered by SRT. Thanks to support from donors around the world, SRT has been able to provide monetry incentives for Rhino Rangers, and in turn, the Trust can carefully monitor more rhinos across the landscape: it’s a win-win. During the last two years additional rewards have also been introduced without the financial incentive.

The first Annual Kunene Rhino Awards Ceremony took place in late 2020 (with Covid-19 lockdown protocols strictly observed) – a welcome moment to celebrate achievements during an extremely tough year because of the pandemic. The second took place on 18 November 2021 in Twyfelfontein, home to the famous ancient rock engravings of long-ago Namibians and wildlife, including the inspiration for SRT’s own rhino logo.

“I would like to encourage you all to keep up the dedication and commitment, which is being acknowledged in this awards ceremony today. You have all worked very hard this year and this has led to no rhino poaching over the past 12 months – a great achievement that is due to all your hard work.”

Award-winners were determined via data from the Spatial Monitoring And Reporting Tool (SMART) software that enabled SRT to accurately measure performances of individual rangers during the year. The categories and winners were:

Alongside the much-deserved awards for individual performances, we all know that no one can save rhinos alone. The ceremony also highlighted the importance of teamwork and collaboration, something that SRT has championed since it was established. Together, the entire SRT team and the community Rhino Rangers play a vital role in rhino conservation throughout Kunene. This legacy was also celebrated, as Rhino Rangers involved with the programme for five years or more received Hero Jackets, demonstrating the rangers’ level of expertise by displaying training badges and stars.

Ceremonies like this don’t just make an impact on the day, they help boost long-term morale for everyone, showing each ranger that their individual and collective hard work is recognised and appreciated.

We’d like to thank all those who supported the event, including ForRangers, USAID and CYMOT, for continuing to motivate Rhino Rangers to keep up their great work.