You are here: Home » News » Training dogs to protect rhinos at Lewa 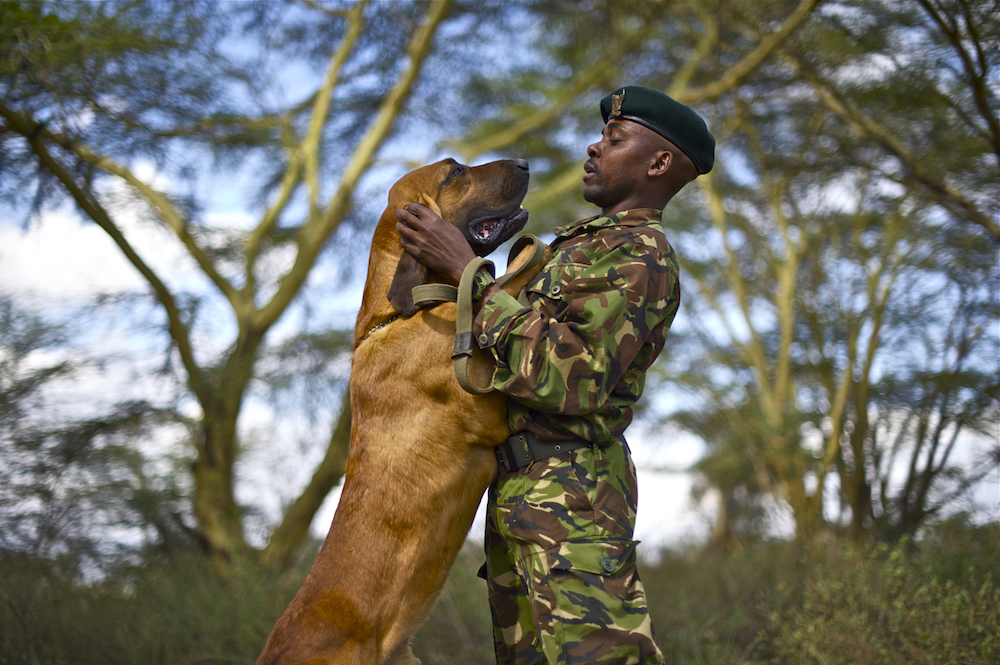 Our canine friends are renowned for their excellent sense of smell. With this terrific talent, dogs are able to track scents over great distances. Once used by hunters to follow wild deer and boar, breeds like bloodhounds have been used since the Middle Ages to track human scents. More recently, these skills have come into demand for conservation. Dogs are increasingly used to track scents after a poaching incident, leading rangers and enforcement authorities to suspects, or helping them understand routes used by poaching gangs.

Dogs are also adept at detecting wildlife products, and many are stationed to ‘sniff out’ rhino horn at key locations, such as airports, park gates, or even in organised searches, finding and stopping wildlife traffickers in their tracks.

At Lewa Wildlife Conservancy in Kenya, the canine team plays a crucial role in protecting the black and white rhinos that call the Conservancy home. The Unit’s leader, Joseph Piroris, leads an expert team of six dog handlers and three dogs. Two of the dogs, Ruby and Sasha, are two years old and regularly join the security team to respond to incidents both at Lewa and beyond its boundaries. In 2018, Ruby and Sasha enabled Lewa’s team to track and arrest individuals after two incidents, with one of these cases leading to a successful conviction. Lewa’s newest recruit, Nasuju, is one year old. After moving from South Africa, Nasuju is still adapting to the climate in northern Kenya, while he trains with the team.

Of course, it takes a little more than ‘go fetch’ to make sure that Ruby, Sasha and Nasuju can be successful tracking dogs for the anti-poaching unit. The dogs train six out of seven days each week, working alongside their handlers to improve a variety of skills and stay at the top of their game. Most training takes place by recreating a crime scene: dogs and handlers track a pre-laid scent to find ‘suspects’, while the teams aim to recreate the conditions of a real incident, keeping the canine unit on their toes (and paws!).

Just like pet dogs, Ruby, Sasha and Nasuju all go on regular walks, too – though we’re sure that ‘regular walks’ for most dogs don’t include strolling past elephants, buffalo or rhinos! All dogs enjoy playtime, and these walks allow the dogs to have some time away from their work, which helps them to stay happy and healthy.

“The Lewa Canine Unit has achieved great impact over the years. The dogs not only support anti-poaching work on the Conservancy, they are also often called upon to support in follow-up to criminal activities in the neighbouring communities. Every year, they have helped our rangers and local law enforcement authorities recover hundreds of stolen livestock, saving the affected farmers from financial ruin. The dogs have also helped track road bandits, robbers, illegal fire-arm holders and more.

“We take good care of them, and the handlers are people who love dogs. We feed them well, ensure that they live in clean kennels, and that they are taken out for walks and training daily. Our vet constantly checks on them to make sure they are healthy.” Joseph Piroris, Head of Lewa’s canine unit.

As the number of canine units across Africa has expanded in recent years, we’ve been working to ensure they are as effective as possible. Since 2018, generous donations have enabled Save the Rhino International to support annual workshops for canine units across Africa. Unfortunately, the 2020 workshop, which was meant to be held in Zambia in May, had to be postponed due to Covid-19. We hope that we can reschedule the workshop soon, bringing teams such as Joseph’s together with others to share best practice, learn new skills and ultimately, improve the effectiveness of canine units so that they can keep rhinos and other wildlife safe.