You are here: Home » News » The dog squad – heroes of conservation! 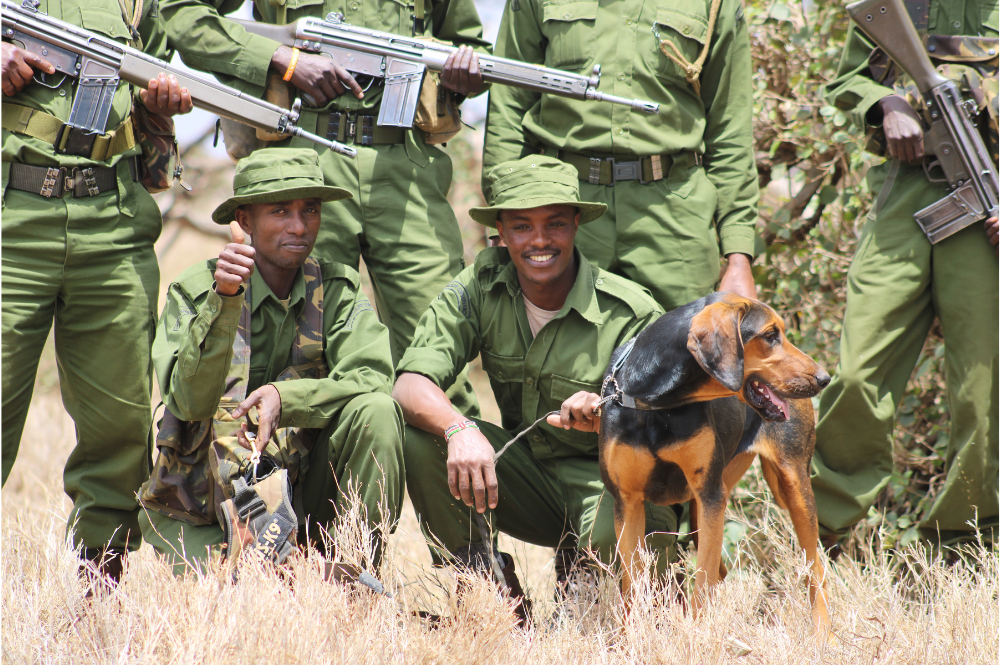 They say that dogs are a man’s best friend, but they’re more than just loveable companions. The work of the dog squad at Lewa Wildlife Conservancy in Kenya has not only helped to increase safety but has also led to four arrests and a drop in rhino poaching incidents to zero.

Lewa Wildlife Conservancy is one of the most established rhino conservancies in Kenya and rhino protection has always been at its core. The canine team plays a crucial role in protecting the black and white rhinos that call the Conservancy home.

Canine units have proven to be a highly effective tool in supporting anti-poaching efforts, owing to their excellent sense of smell. Thanks to this sensational skill, dogs can track scents over great distances, leading rangers and enforcement authorities to suspects, or helping them to understand routes used by poaching gangs. Dogs are also adept at detecting wildlife products, and many are stationed to ‘sniff out’ rhino horn at key locations, such as airports, park gates, or even in organised searches, finding and stopping wildlife traffickers in their tracks.

Lewa’s Canine Unit, headed by Joseph Piroris, is comprised of a team of five dog handlers and two dogs, Ruby and Nasuju. The dogs train six out of seven days each week, working alongside their handlers to improve skills and stay at the top of their game. Most training takes place by staging a crime scene: the team recreates the conditions of a real incident and tracks a pre-laid scent to find ‘suspects’. This training enables the dog unit to play a critical role when dealing with security incidences such as stock theft, road banditry, robberies, poaching incidents and incursions. They also train for specific scenarios such as night and helicopter tracking, as well as canine first aid, nutrition and care.

Thanks to the Unit’s efforts, security incidents, including rhino poaching, have reduced significantly. Between January and June of 2020, Lewa’s canine unit was deployed in 11 cases of stock theft, nine cases of road banditry, and eight robbery incidents, leading to four successful arrests and the recovery of two weapons – an amazing achievement by the team!

Congratulations must also go to Joseph Piroris who has just received the IUCN Highly Commended Ranger certification, which proves his great ability to lead Lewa’s dog squad to success.

Piroris said: “I am very happy to lead this elite team of dogs and handlers, all working tirelessly and putting their lives at risk to protect wildlife and communities. Our dogs are on the frontline of conservation efforts within Lewa, and are also frequently deployed beyond Lewa’s boundaries, responding to emergency calls from the communities surrounding Lewa and other conservancies.”

The success of Lewa’s unit has even gone on to influence Lewa’s main partner in Northern Kenya, the Northern Rangeland Trust, to establish a new canine section made up of two dogs and four dog handlers.

Your donations are not only training and deploying canine units in Lewa, but 100 km away at Ol Jogi Conservancy in Kenya too. Ol Jogi was the first Kenyan conservancy to deploy anti-poaching dog units back in 1989. The successes of this team have now been put to great use, inspiring neighbouring rhino sanctuaries and other projects across Africa to follow suit.

On behalf of the canine teams at Ol Jogi Conservancy and Lewa Wildlife Conservancy, and everyone at Save the Rhino International, we would like to say a massive thank you to all our supporters, especially Rotterdam Zoo and Fundación Bioparc, for your contributions to the ‘Rhino Dog Squad’ programme. Your generous donations are making a difference for Ol Jogi and Lewa’s canine units, ensuring they can continue to effectively support anti-poaching efforts and protect Kenya’s black and white rhinos.