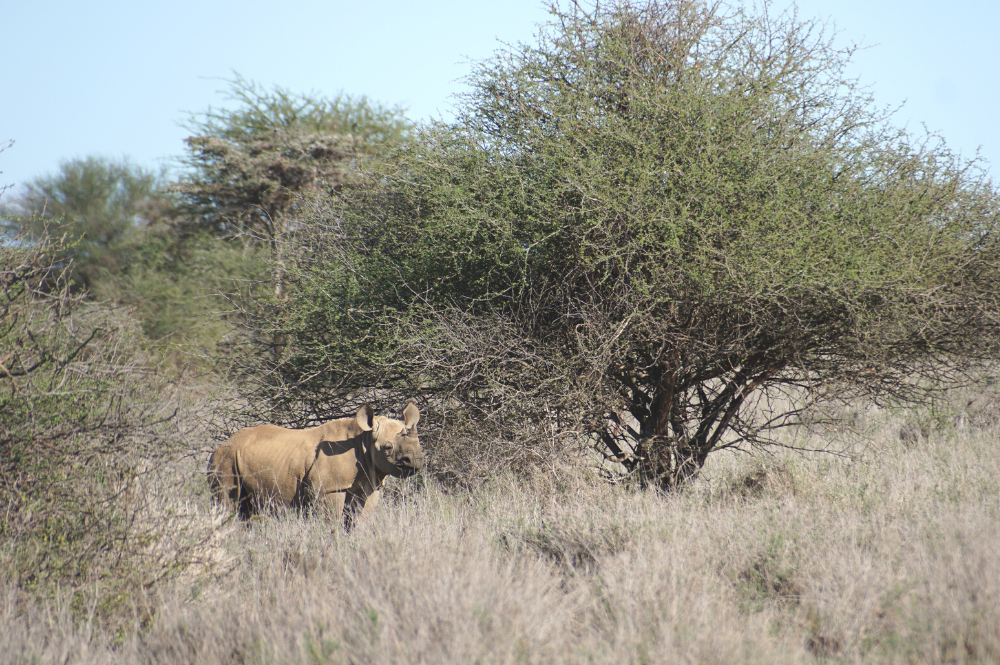 Thankfully, poaching declined significantly in the next decade. With proactive anti-poaching activities and careful conservation measures, rhino populations began to recover. But when the current African poaching crisis began in 2008, Kenya’s rhinos were once again under attack. Rangers that had recently focused on supporting the growth of the rhino populations they monitored every day had to pivot towards intense rhino protection. Since 2008, more than 300 rhinos have been poached in Kenya.

Ol Jogi Conservancy, in Laikipia County, has lived through these huge shifts in poaching. The Conservancy was established in 1980 as a rhino sanctuary, providing a safe home to a founder population of four black rhinos and six white rhinos. Thanks to the commitment and passion of Ol Jogi’s team, despite the poaching threats, these numbers have grown substantially over the years. Today, Ol Jogi is a stronghold for the rarest black rhino subspecies, the Eastern black rhino (at the last official international count in 2017, there were just 1,000 Eastern black rhinos left). Keeping these rare rhinos safe is one of Ol Jogi’s top priorities.

To protect rhinos (and the myriad other threatened wildlife that live within the Conservancy’s boundaries), Ol Jogi employs more than 100 security personnel that work round the clock to keep endangered animals safe. Thankfully, their hard work has paid off: Ol Jogi has maintained its zero-rhino-poaching record, with the last incident at the Conservancy in March 2015. This is a huge achievement, especially considering the immense challenges that the Covid-19 pandemic has added to the already dangerous and difficult job of being a wildlife ranger.

Covid-19 caused Ol Jogi’s main revenue source, tourism, to dry up. Securing enough money to keep rangers employed become tough, let alone finding funding to continue important longer-term projects that had been planned over months and years. One of these projects was the plan to repair and rebuild old ranger houses. Creating better homes often isn’t at the top of people’s minds when they think about rhino conservation, but we can all relate to the comfort of relaxing somewhere warm after a tough day at work. Improving ranger facilities makes a huge difference.

Thanks to incredible support from the Scott and Jessica McClintock Foundation and ForRangers, the rebuild and repair project was able to continue through 2021. Damage was repaired, new rooms, showers, bathrooms and a kitchen were built, and solar power was added, significantly improving rangers’ living spaces while they’re off duty at Ol Jogi.

Speaking to our colleagues in Kenya, it’s clear that Ol Jogi’s rangers are delighted with their new and improved accommodation. The new houses have already elevated the morale and motivation of the unit, in turn improving rangers’ mental health and their effectiveness at work.

“The unwavering support from Save the Rhino and its donors has allowed Ol Jogi to withstand the challenges of Covid-19 and we have continued to make great developments. We are excited about several new initiatives in 2022 and we remain committed to fulfilling our obligations of conserving Africa’s wildlife and habitats as a global heritage for future generations”.

We would like to say a big Thank You to everyone that has supported Ol Jogi Conservancy in recent years, and of course, to the dedicated team at Ol Jogi for continuing to protect the rhinos that call the Conservancy home.