You are here: Home » News » A Rhino’s Best Friend 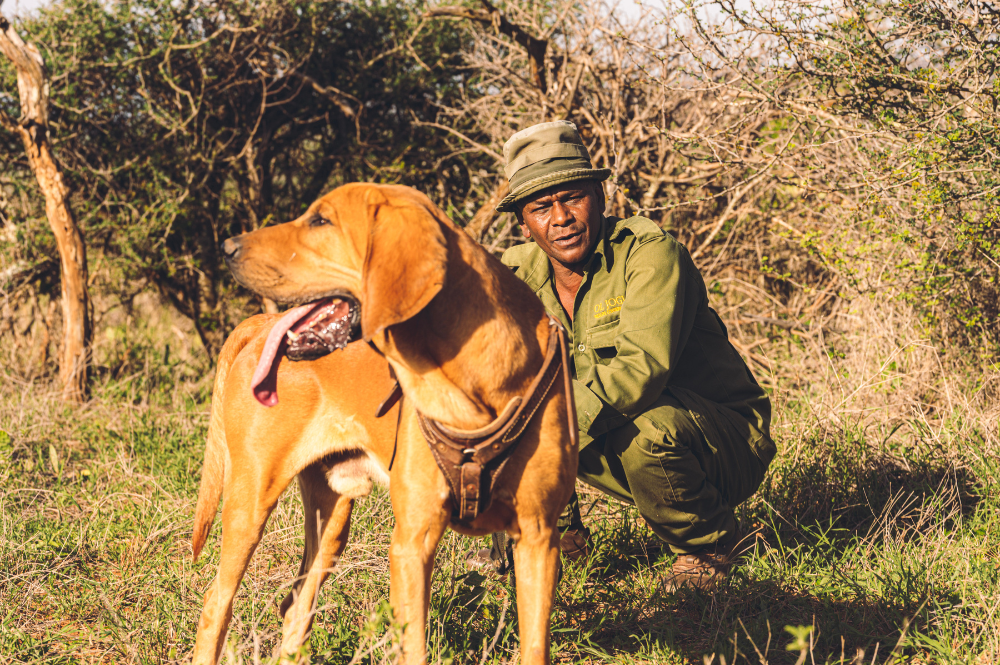 ‘Every dog has its day’ is a phrase that’s ideal for the canine task forces that are leading the charge on rhino conservation, boosting anti-poaching efforts in sub-Saharan Africa. Yet their ‘day’ is every day. Hard-working and incorruptible, canine units are an integral asset in the fight against rhino poaching.

As stated in the most recent report to the Convention on International Trade in Endangered Species (CITES), the global rhino population is in decline. In particular, poaching has had a significant impact on white rhinos, with the species decreasing from approximately 20,000 animals in 2010 to fewer than 16,000 today. Beyond poaching, rhinos and their habitats are threatened by the climate crisis and human development, which means that working with communities to ensure rhinos can thrive in resilient and wild places is essential.

In 2021 and early 2022, your donations, alongside others, helped fund two conservation canine teams in the heart of Kenya: at Lewa Wildlife Conservancy and Ol Jogi Wildlife Conservancy. Ol Jogi and Lewa each have crashes of the Critically Endangered Eastern black rhino, and the near-threatened Southern white rhino. Keeping both species – and many other endangered animals – safe, whilst also working holistically with surrounding communities, are the conservancies’ top priorities.

At Ol Jogi, rhinos are under the watchful eye of four Bloodhounds and one Belgian Malinois, whilst Lewa’s human team works with a Dobermann-Bloodhound cross named Nasucha, and a Bloodhound named Ruby. These dogs, when working alongside their specially trained handlers, are both proactive and reactive, capable of going beyond human ability and gaining an advantage in the field by using their unrivalled senses to follow tracks and cover vast distances.

Between 1 April 2021 and 31 March 2022, the units from Ol Jogi and Lewa have been involved in more than 20 operations and assisted in more than 10 arrests, making them a force for good. Whilst their primary role has been to safeguard wildlife on conservancies, many of these operations have taken place outside of conservancy boundaries, helping to reduce crime in neighbouring communities. As a result, regional crime has significantly decreased and trust in conservancies and rangers continues to build.  Additionally, no rhinos have been lost to poaching in either conservancy since 2019, despite the continued threat.

Our recent grants to Ol Jogi and Lewa’s working dog units have ensured the teams have all the necessary equipment, training, and daily support, and also helped fund new dog toys for enrichment, and vital equipment such as beds, leashes, travel crates and water buckets.

Gaymer continued, “We are very grateful for the equipment and from the entire canine team, we really appreciate it.”

Outside of Kenya, we’re working to increase capacity across wildlife protection canine units through our annual Working Dog Workshop, which brings together canine teams from across the continent to share learning, build networks and establish best practices.

The work of rangers and canine units at Ol Jogi and Lewa Conservancies is critical to ensure a safe and secure landscape for rhinos in Kenya.

A huge thank you to every donor, supporter and partner that’s helping to fund this vital work. In particular, we’d like to thank Rotterdam Zoo, Tallinn Zoo, and the Betty Lawes Foundation.