You are here: Home » News » An interview with Dr Sam Ferreira 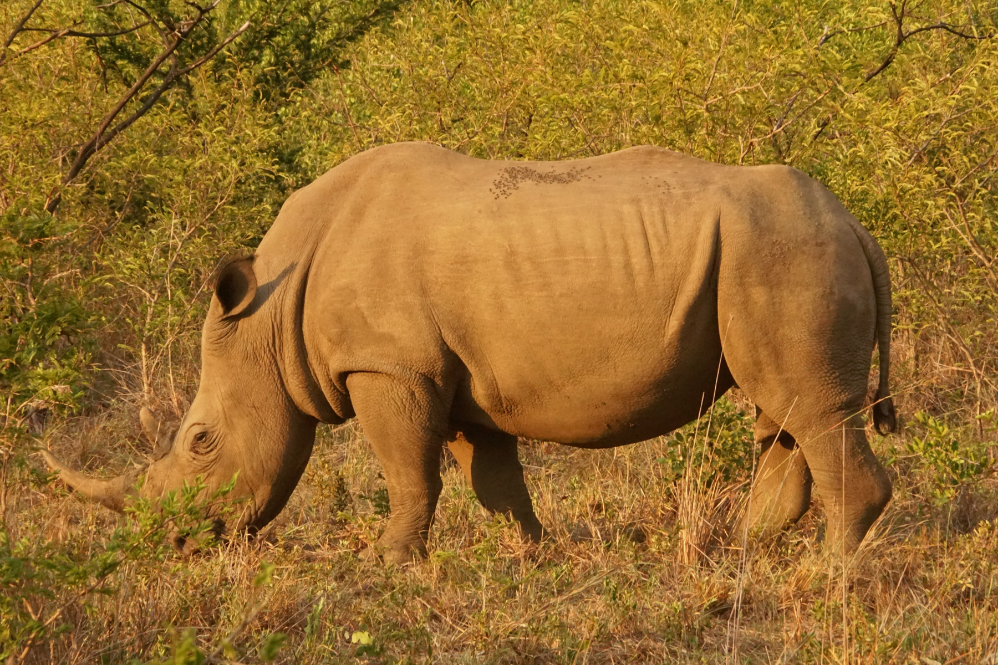 Dr Sam Ferreira has spent his career understanding the roles that mammals play in their habitats, how they relate to each other, and the most effective ways to protect those species threatened with extinction. In 2021, alongside his role as the Large Mammal Ecologist at South Africa National Parks (SANParks), he was appointed the Scientific Officer for the African Rhino Specialist Group (AfRSG). The AfRSG is a group of African rhino experts that supports the conservation of the continent’s two rhino species, as part of the International Union for the Conservation of Nature (IUCN). We recently spoke to Sam to find out more about his career, his hopes for African rhinos, and his support for the AfRSG.

What led you to your role at SANParks and, more recently, the AfRSG?

I’ve worked on mammal conservation for the majority of my career, but I started with much smaller species than rhinos! I previously completed a postgraduate degree on the response of ecological systems to disturbances, mostly working with small mammals like shrews, rats, and mice. After this, I went to work for the Department of Conservation in New Zealand, linking scientific evidence to conservation management practices for marine animals and alien species. At the same time, I was also working on elephant conservation with the University of Pretoria. In 2006, I moved back to South Africa (where I am originally from) to continue this work with the University of Pretoria.

In 2008, I began my current role at SANParks, where I lead on the ecology of South Africa’s large mammals, as well as an ‘honorary mammal’, the crocodile. That was the year that the current rhino poaching crisis began, so while my role covers many animals (including elephants, lions and hyenas), a lot of my focus has been on rhinos. I became a member of the AfRSG in 2012, and have enjoyed learning and sharing knowledge with colleagues across the continent. And that’s what drives me in the role as Scientific Officer today – I want to work with other members of the Group to understand the dynamics of rhino populations across Africa, and how we can use experiences in one place to support action in another.

Why have you continued to focus much of your work on rhinos?

The simple answer is that rhinos are in trouble, and they have been for some time, so naturally my role at SANParks requires that I work on rhinos. But beyond this, rhino conservation leads me into new and interesting areas of science. I do believe that we know, biologically, how to ‘save’ rhinos in Africa. Our main challenge isn’t biological, it’s social, and that leads me to areas of science that you wouldn’t usually connect with a biologist.

For example, ecological studies won’t tell us why people poach, or how we can stop it. So, I often look to the security world to improve my understanding of how we can reduce poaching. We’ve got to improve our knowledge of human behaviour and unpack the key issues that communities living with and around rhinos are facing. I hope that my role with the AfRSG can help to bring an open mind and inform others of new ways of thinking in these areas.

With that in mind, what do you think is the best way to tackle poaching?

Whenever I look at a challenge, I want to understand the underlying dynamics of a problem. Typically, when it comes to poaching, there are a few key drivers: inadequate law enforcement, human-wildlife conflict, consequences of past and present social injustices, trade markets and high profits. To truly understand and overcome the social issues that drive rhino poaching, we have to listen to the voices of the people living near rhinos.

As a scientist, I want to see evidence, and our decisions for conservation have to be based on such evidence. We can’t assume anything, even if we have in the past. For example, we often assume that increasing arrests will deter would-be poachers, but that’s not necessarily the case.

This is one way that the AfRSG, and the expertise of the members within it, can truly add value to rhino conservation – learning from each other across rhino range states, and working together to achieve positive outcomes for rhinos.

Aside from poaching, what do you think are the other challenges are for rhino conservation?

Well, almost all of the problems that rhinos face are associated with how people are (or have) interacting with the environment. I would say, after poaching, the next three challenges for rhinos are habitat availability, climate change, and the impact of reduced birth rates in small populations.

As the Scientific Officer for the AfRSG, what are your goals for the next year, five years, and 10 years?
In the next 12 months, my focus will be supporting AfRSG members in our upcoming meeting (which takes place every three years), and thereafter compiling our African rhino status report for CITES (the Convention on International Trade in Endangered Species), before the CITES meeting in November 2022.

Following this, I’ll be supporting the Group with the scientific evidence that members need to improve rhino conservation. I’m keen to evaluate and assess the scientific support that’s required at site and national level, and understand how the AfRSG members can feed into this. There is immense knowledge in the Group, and there are many topics that, together, we could provide helpful outputs and baselines that can support future projects across the continent.

What is your one ‘take home’ message to those reading this interview?

Biologically, solving the rhino “problem” isn’t too difficult. What is difficult is getting out of our comfort zone and doing things differently.

Our huge thanks to Dr Sam Ferreira for this interview! If you have any more questions, add them below and we’ll ask Sam as soon as we can.

One thought on “An interview with Dr Sam Ferreira”