You are here: Home » News » A Rhino Costume in Borlänge 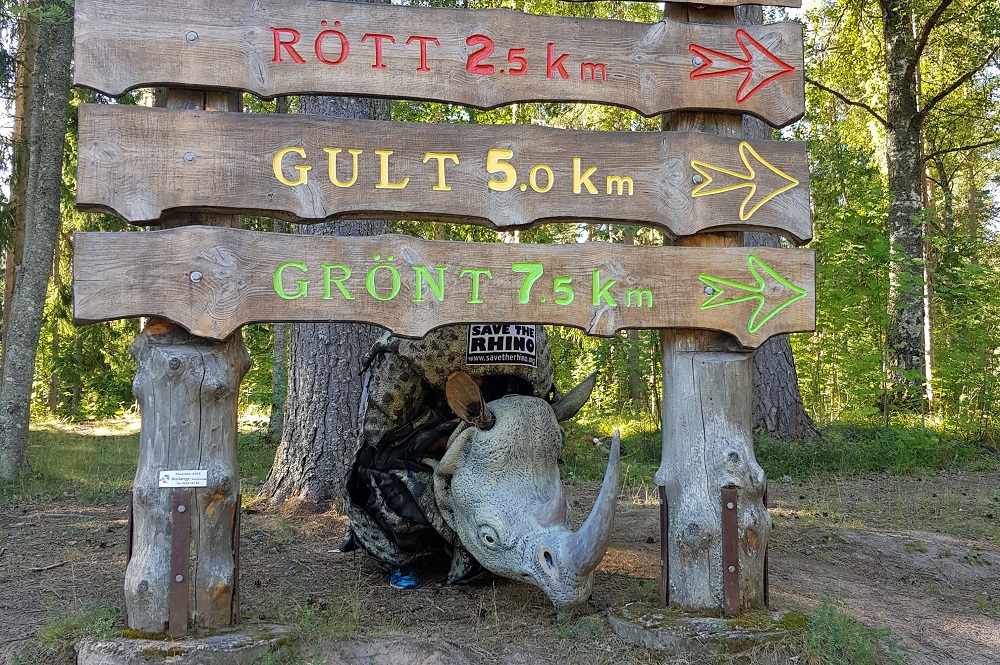 My love for running and subsequently, the rhino, came from seeing the Rhino Runners belting through the London Marathon since I was younger. As I grew up and began to run myself. It only seems right that I bring the rhino costume to my adopted country, Sweden, for the Rhino Run Borlänge.

Even collecting it from Save the Rhino’s office in London and wearing it across Central London to transport it to Sweden was an adventure. The children love the rhino. Whereas adults are spilt into those with broad smiles and those who try to make out it is perfectly normal to see a rhino wandering about.

I first ran in the rhino costume at Gothenburg’s 2018 half marathon. With over 40,000 other runners, and the reaction to the rhino was ecstatic. The support on course was fantastic. I could actually hear the supporters’ cheers travelling along the road ahead of me.

After the race, with my pulse-rate high and rhino costume still on, a Swedish television company herded me for an interview which has now reached 14,000 views on Facebook. I also made my debut into six newspapers: one national newspaper and five regional newspapers.

I then took the reins of my rhino-fame by setting up my own charity run; The Rhino Run Borlänge. This happened in September 2018, giving all surplus revenue from race registrations to Save the Rhino.

I ensured the success of the charity run by having low entry fees and encouraging every walker, jogger or club-runner to take part in the 5km or 10km races. They were even given a professional chip-timing system and a printed race number. The buzz around the event meant I secured race sponsorship and donations of sports drinks and lottery prizes.

I went from long-time admirer to Rhino Runner, and with the triumph of the Rhino Run Borlänge, I am excited to further support Save the Rhino in the future.

Find out more about our iconic rhino costumes here.