You are here: Home » Thorny Issues » The use of drones in rhino conservation 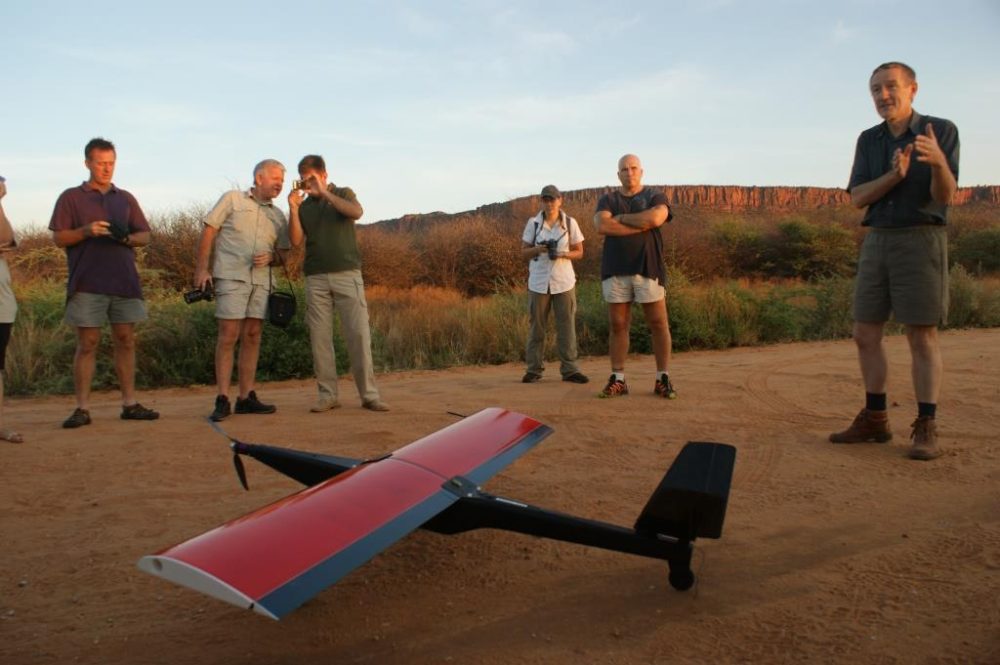 Rhino poaching has escalated in recent years with record numbers of rhino being killed across Africa for their horn. 1,215 rhinos were killed in South Africa alone in 2014, with no sign of a slowdown, due to the demand for rhino horn in Vietnam and China.

In recent years, various new technologies have been tested and used in an attempt to combat wildlife crime. Drones, satellite imagery, predictive analysis, DNA analysis, hidden cameras, GPS location devices and apps are all being implemented to try and predict, locate, track and catch suspected poachers to reduce the number of animals being killed for the illegal wildlife trade.

The drone, in particular, has been receiving increased press attention as a ‘silver bullet’ to end the current rhino poaching crisis. With headlines such as “Drones, satellites and maths take down poachers in South Africa”, “Google to Fund Anti-Poaching Drones in Asia, Africa” and “Hi-tech boost for fight against rhino poaching”, it is hard not to get swept up in the media hype. But how effective are they?

What are drones and what are they used for?

“[an]unmanned aerial vehicle (UAV), commonly known as a drone, and also referred to as an unmanned aerial vehicle and a remotely piloted aircraft (RPA) by the International Civil Aviation Organization (ICAO), is an aircraft without a human pilot aboard. Its flight is controlled either autonomously by onboard computers or by the remote control of a pilot on the ground or in another vehicle. ICAO classify unmanned aircraft into two types under Circular 328 AN/190:[1]

“The typical launch and recovery method of an unmanned aircraft is by the function of an automatic system or an external operator on the ground. Historically, UAVs were simple remotely piloted aircraft, but autonomous control is increasingly being employed. The Nazi-German V-1 flying bomb flew autonomously powered by a pulsejet.

“They are usually deployed for military and special operation applications, but also used in a growing number of civil applications, such as policing and firefighting, and non-military security work, such as inspection of power or pipelines. UAVs are often preferred for missions that are too “dull, dirty or dangerous” for manned aircraft.”

While those employed by e.g. the US military to strike terrorist targets are large, capable of flying long distances and carrying heavy payloads (e.g. missiles), drones used for conservation purposes are much smaller and more limited. Typically, they measure 1-2 metres across, have a flight time of 30 minutes to over an hour, a range of 30 km to over 50 km (so long as they are within line-of-sight of the operator), and can acquire high-resolution photographs, high-definition video footage and can produce 2D and 3D maps of surveyed areas. They can be equipped with ordinary cameras / videos, night-vision equipment or thermal-imaging cameras so they can be used 24 hours per day.

Recent articles about conservation drones have covered those manufactured by companies such as AirWare, Air Shepherd, Denel, Diceros, Falcon Unmanned, Shaya E-Security and UAV & Drone Solutions and many others. They come with manufacturer claims such as ‘the best value on the market’, but equipped drones are not cheap, with prices ranging from $50,000 to upwards of $250,000.

http://www.wildeas.org/ founded by Dr Nir Tenenbaum is a useful resource to learn about the different types and capabilities of drones. Since its inception in 2011, Wildeas has advised government and non-profit institutions, e.g. under appointment by WWF, the organization surveyed over 50 drone models to compare their relevance to anti-poaching work in Namibia.

And there is a salutary section on why systems fail that is very well worth reading.

As a tool for monitoring wildlife, drones have proved useful for monitoring some species. For example, they are being used by the Sumatran Orangutan Conservation Programme in Indonesia as they are capable of flying above the tree canopy – a task previously difficult and time-consuming for forest rangers – to effectively track and monitor populations by observing nests.

Drones (and other new technologies) seem to be very successful in attracting funding.

In 2012, Google gave $5 million in funding to the World Wildlife Fund (WWF) to purchase conservation drones to fly over parts of Africa and Asia in an attempt to help monitor and catch wildlife poachers.

In March 2014, the Howard G. Buffett Foundation announced a 255 million rand donation for a three-year initiative in partnership with Nature Conservation Trust, South African National Parks (SANParks) and a South African public benefit organisation (PBO) to combat poaching in Kruger National Park and test new anti-poaching technology. SANParks is testing the use of drones and this year, the Foundation added a further 37.7 million rand to buy a helicopter for use in anti-poaching operations.

Can drones be used to help combat rhino poaching?

If you read the press releases from companies manufacturing drones / UAVs, then the answer seems to be yes!

Drones as a tool for anti-poaching have a variety of capabilities which according to John Petersen, Chairman of the Charles A. and Anne Morrow Lindbergh Foundation, have the “potential to shut down poaching entirely in areas where they are deployed.”

The Air Shepherd Initiative says it uses military-style computer analytics to identify poaching hot spots, and then sends silent drones equipped with night vision to track down poachers. In partnership with the University of Maryland Institute for Advanced Computer Studies (UMIACS), they use algorithms to predict when and where the poaching will take place. Rangers are then pre-deployed to intercept poachers before the rhino is killed.

Ol Pejeta Conservancy in Kenya partnered with AirWare to carry out testing to complement the sniffer dogs and rangers. The trial was deemed a success but it was noted that “finding an airframe that was robust enough for the environment proved difficult”.

What are the problems with drones as rhino-protection tools?

There are technological limitations to drones’ usefulness. Drones are restricted by the very features that make them attractive. They have a limited battery life, range must be within line-of-sight of the operator, and any malfunction can lead to an expensive crash. The payload (thermal-imaging equipment etc.) can make them heavy, and gusty winds, hilly terrain or other unfavourable environmental conditions can make them difficult to operate.

Most importantly perhaps, drones may be unmanned but they still require skilled operators. A drone is only as good as its operator. If the operator has not received sufficient training, the capabilities will not be fully utilised. And in some cases, drone operators have allegedly been bribed to give out sensitive rhino location details to poachers.

Furthermore, drones need back-up. As Professor Tom Snitch from the University of Maryland Institute for Advanced Computer Studies cautions, drones can be a useful tool as long as there are rangers on the ground ready to use the data.

And Dr Nir Tenenbaum cites a number of issues on his website http://www.wildeas.org/ including a “lack of clear, fact-based strategy and tactical planning”.

What does Save the Rhino think about drones?

None of the media coverage reports we have seen about the use of drones in Hluhluwe-iMfolozi Park, for example, has included any comment from rangers working on the ground about the effectiveness or otherwise of the drones tested there. To our knowledge, the Park has not followed up the trial by purchasing a drone for ongoing use. When we’re considering how to allocate our funds, we always, always ask the rangers what the priorities are, rather than being led by the companies manufacturing specific items of kit.

A recent article on Motherboard quoted Adam Welz of Wild Aid: “The reality is that saving rhinos comes down to persistence and lots of hard and sometimes boring work, and a lot of the tech is either a distraction or will likely make the problem worse. Everyone is looking for ‘the’ game-changer, whereas no single piece of tech will solve this very complicated problem.” Again, as Crawford Allen from WWF says, “Nothing beats a real dog” and he’s right. You need to get the basics right and, sadly, there are lots of gaps in these basics that deserve our support.

With thanks to Abigail Salmon for her help in compiling this article.

Kruger drones struggle to take off, by Yolandi Groenewald

Rhino Horn Cams? If Only Stopping Rhino Poachers were that easy, by Melissa Cronin

Satellites, mathematics and drones take down poachers in Africa, by Thomas Snitch

Drones can curb poaching, but they’re much costlier than alternatives, by Patricia Raxter and Rory Young

NCBI: The social implications of using drones for biodiversity conservation

11 thoughts on “The use of drones in rhino conservation”