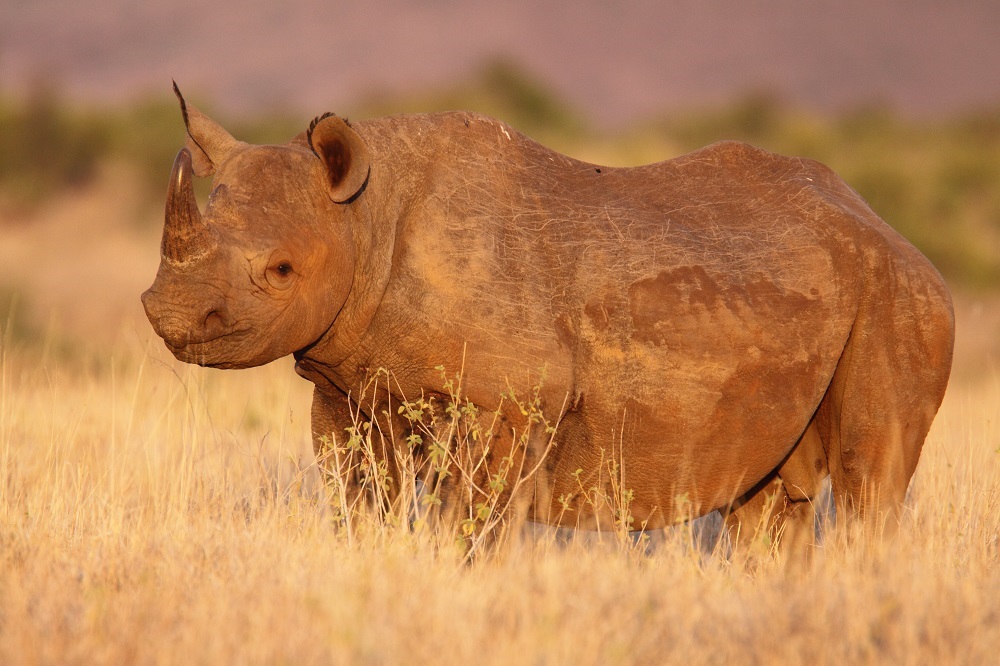 Rhinos face many challenges today, the biggest, most urgent and most newsworthy being poaching. But what impact will climate change have on the future of the five rhino species within Africa and Asia in the longer-term, and how are conservationists planning for likely scenarios? Below, we review a number of climate change-related topics and their impacts on rhinos, and discuss what we can do about each of these areas.

What is climate change?

The Earth’s climate has always varied; at various prehistoric times the Earth has been either far colder or far warmer than it is today. But in the past few decades, the Earth has been warming at an unprecedented rate that does not allow living organisms time to adapt. Climate scientists say that the warming of our planet is ‘unequivocal’, and that the cause of the warming is ‘extremely likely’ (i.e. more than 95% certainty) to be human activity.

There are a number of activities that contribute towards climate change or, in fact, what we will now continue to call a climate crisis.

One of these activities is the use of fossil fuels. Burning fossil fuels (coal, oil and natural gas) for energy releases carbon dioxide, a ‘greenhouse gas’ that traps the Sun’s energy in our atmosphere like a blanket. During the past 800,000 years, carbon dioxide (CO2) in the atmosphere has cycled between 150 and 280 parts per million or ppm. Today, CO2 is at a worrying level of more than 400ppm.

Changing farming and land-use patterns also contribute towards the climate crisis. Increasing livestock production, intensive monoculture farming and deforestation each have their own impacts on our planet, including increasing methane production, reducing biodiversity and lowering the amount of CO2 absorbed into the ground.

What are the effects of the climate crisis and how does it impact rhinos?

Some impacts of the climate crisis we face are easier to predict than others. The most obvious prediction is that average temperatures will go up.

In 2015, world leaders committed to limit the global average temperature rise to well below 2oC. While this number may seem small, it has huge consequences. A 2oC rise in global average temperature would in fact equate to 4oC in Central Africa (at which point many crops won’t grow) and in the Amazon Basin (the rainforest may revert to savannah) and 7oC in the Arctic.

For rhinos, significant increases in temperature would be extremely tough. Rhinos try to keep cool at the hottest times of day, seeking shade or cool mud. More time keeping cool in a warmer world means less time to browse for food, and animals suffering nutritional stress are less likely to reproduce successfully.

Changes in rainfall are more difficult to predict than temperature rise, but shifting precipitation patterns are likely to have the biggest effect on rhinos.

Across Southern and Eastern Africa, increasing temperatures are expected to cause significant and unpredictable shifts in rainfall. More extreme precipitation events – floods and droughts – are set to occur; in fact, even now there are more rainfall issues in the region – Namibia and South Africa have recently experienced major droughts.

The recent droughts in southern Africa, such as the extended drought that affected South Africa and eSwatini, have significantly impacted rhino populations. eSwatini’s white rhino population, particularly lactating cows, was severely affected by the drought that lasted from 2014-17, with unusually high calf mortality. Rhino breeder John Hume attributes his financial difficulties in part to the drought in North West Province, and the need to buy in lucerne to supplement grazing for his population of c. 1,600 Southern white rhinos. uMkhuze Game Reserve, a programme we’ve supported since 2010, was forced to translocate some of its Southern white rhino to neighbouring iSimangaliso Wetland Park.

The current extreme drought in Namibia is also threatening rhino populations. Black rhinos, being browsers, tend to do better in drought situations than grass-eating white rhinos, but in an already semi-arid landscape, all animals – particularly cows with young calves – will struggle to find enough food and water.

In South Asia the annual monsoon is becoming more unpredictable and associated with more intense rainfall and drought. In times of reduced rainfall, Greater one-horned rhinos in areas like Kaziranga National Park in Assam cannot use the water to escape the rising temperatures. In Nepal, a recent study shows that Greater one-horned rhinos are vulnerable to climate change due to the increased impact of flooding, as well as the risk of invasive species affecting food supply.

Warming temperatures cause sea-level rise (water expands as it warms) and melting land ice in mountain glaciers and the Greenland and Antarctic ice shelves add to the problem.

While many rhinos live further inland and therefore have a buffer against sea level rise, Javan rhinos all live in one location: Ujung Kulon National Park on the western tip of the island of Java. Rising sea levels increase the risk of flooding in an area that is already prone to cyclones, volcanic eruptions and earthquakes. A major flood in Ujung Kulon National Park could wipe out the world’s entire population of Javan rhinos.

Other low-lying coastal areas would also be at risk, including Way Kambas National Park in Sumatra, home to the Sumatran Rhino Sanctuary, the only facility in the rhinos’ range states to have successfully bred captive animals.

As well as direct impacts, rhinos are vulnerable to secondary impacts of the climate crisis – effects on other species that share the rhinos’ habitat. The most important example is vegetation. Plant species are likely to shift their ranges as climate conditions change, or they may be forced out as invasive species colonise new areas. With less food and more competition for what’s left, rhinos are less likely to breed successfully.

Furthermore, disease vectors – those animals and plants that can transmit diseases – may also move their ranges and expose rhinos to threats to which they have no previously-acquired resistance.

And of course, the climate crisis will also affect people. Human migration may have myriad negative effects on rhinos. But there are also many people and other animals that work every day to protect rhinos. Just like wildlife, these rangers and protected area staff are at risk from rising temperatures and extreme weather events, while in a hotter world tracker and detection dogs are more vulnerable to dehydration and heatstroke.

How can we protect rhinos from the impacts of the climate crisis?

To adapt successfully to a changing world, animals and ecosystems need two things – enough room to move in response to changing conditions, and freedom from other stresses that multiply the impacts of the climate crisis.

For rhino conservationists, this means that in the short term we need to focus on the immediate threats of poaching and the illegal wildlife trade, and on employing rhino management approaches (such as buying fodder and translocating rhinos away from drought-hit areas) to help mitigate some of the current impacts of climate change. But of course, these interventions bring associated costs, draining budgets that are already tight, while increasing demand on resources, human and other.

In the longer term we need to be both improving existing areas and opening up as much new contiguous (joined up) rhino habitat as is possible, ideally in areas that are unlikely to be as severely affected by the climate crisis.

Creating larger ranges for rhinos is highly desirable and has many more long-term benefits, but it is also incredibly challenging in a world with an increasing human population, where the shrinking, rather than expanding, of habitats has been the trend of recent decades. The improvement of existing rhino ranges becomes even more important.

Protecting these existing habitats means improving their health and their resilience to the impacts of the climate crisis. Water resources can be protected by good water management practices and by the digging of boreholes and artesian wells (though deep wells are expensive and underground aquifers are not inexhaustible). Vegetation can be protected by the management of invasive species, such as Mikania micrantha in Kaziranga National Park in northern India or Chitwan National Park in Nepal, and Arenga palm in Ujung Kulon.

What is Save the Rhino International doing?

At Save the Rhino, we are working to reduce both short- and long-term threats to rhinos. Much of this work is currently focussed on improving security and anti-poaching measures, tackling the illegal wildlife trade and reducing demand for illegal rhino products in consumer countries, as well as efforts like the Sumatran Rhino Rescue to unite the remaining Sumatran rhinos in safe breeding centres.

But we also support initiatives such as the Laikipia rhino range expansion project, which aims to open up wildlife corridors and interconnecting land between the wildlife conservancies in Laikipia County in Kenya. We fund the improvement of infrastructure in rhino ranges so that water resources can be managed more efficiently (by both people and wildlife) and we help build more efficient ranger accommodation so that rangers can stay comfortable in extreme temperatures, collect rainwater and generate renewal energy. In addition, we work with the communities living around rhino habitats to ensure that both people and wildlife can benefit from sustainable practices like holistic grazing and responsible tourism.

Finally, from our London HQ, we monitor our own practice and keep our usage of non-renewable energy to a minimum; recycling our waste; limiting air travel to a practical minimum and favouring tele-conferencing whenever possible.

Today, some of the impacts of the climate crisis are already clear. For rhinos, there will certainly be challenges, some of which can be overcome or at least reduced, by planning for the future and improving resilience within a whole ecosystem. In short, we need not only to keep rhinos safe from poaching, but also safeguard their future by conserving their habitats.