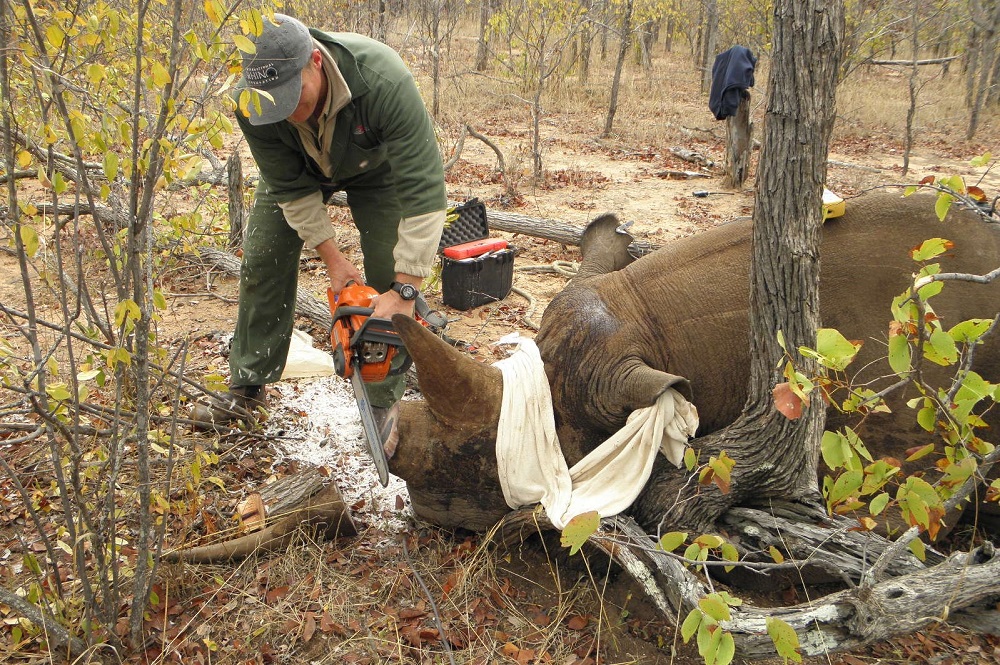 What characterises a rhino? Some might say its huge size, immense power, thick legs, or prehistoric appearance, but I am sure the majority would say their horn. It is what symbolises a rhino, so why the sudden increase in dehorning over the past few years?

Over the past few years there has been a shocking increase in rhino poaching. In 2011, in South Africa alone, 448 rhino were poached for their horns and as of mid-2012 over 300 have been poached. These horrific figures indicate the urgent need for both proactive and preventative measures to curtail the rhino poaching crisis. At a first glance, it would appear that by simply removing the horn the problem is solved; rhinos should be worthless to poachers. However, the issue is a lot more complicated than it first appears.

Namibia was the first country to use dehorning to protect rhinos from poaching. Between 1989 and the early 1990s, dehorning coupled with rapid improvements in security and funding for anti-poaching was perceived by stakeholders to have contributed significantly to reducing poaching losses. In Namibia, not a single dehorned rhino was poached.

There have been several other successful cases across Africa. Rhinos dehorned in recent years in certain Zimbabwe Lowveld conservancies appear to have 29.1% higher chance of surviving than horned animals. In Mpumalanga, South Africa, just over one-third of all the reserves’ rhinos (excluding Kruger NP)  have been dehorned, and out of the 33 rhinos killed from 2009-11, only one was a de-horned rhino.

However, there are numerous cases where dehorning has proved insufficient to prevent rhinos from falling victim to poachers. For example, in Hwange National Park, Zimbabwe during the early 1990s, the majority of de-horned rhinos were killed just 12-18 months after being dehorned. In Zimbabwe’s Save Valley Conservancy, six newly dehorned rhinos were poached during January-August 2011 (one rhino was killed within 24 hours and another within five days of being dehorned).

For dehorning to be effective, it must be coupled with extensive anti-poaching security and monitoring efforts. With an absence of security, rhinos may continue to be poached regardless of whether they have been dehorned.

So why do poachers continue to target hornless rhinos? This is often attributed to the stub of horn that is left after removal. If the horn is cut too close to the germinal layer, this could damage the horn base and lead to deformed horn re-growth. Current dehorning is estimated to remove 90% and 93% of horn mass in male and female white rhinos respectively. So during any dehorning exercise a stub of horn will remain: although poaching is made less profitable, the sad reality is that poachers will still kill for a horn stub due to its high value.

Poachers may also kill dehorned rhinos out of vengeance. In Hwange NP, it was thought that poachers killed dehorned rhinos, to avoid tracking them again. Furthermore, if there is thick bush or hilly terrain poachers may not see if the rhino has an intact horn prior to shooting.

Horns grow back over time, with recent studies claiming that the re-growth of dehorned rhino horn appears faster than growth in non-dehorned rhinos. With the current severe poaching threat, experts recommend that rhinos should ideally be dehorned every 12-24 months in order to be an effective deterrent.

Dehorning is an intrusive procedure and, like any immobilisation, there is a risk to the rhino during the operation. While all efforts are taken to reduce the risk, there are sometimes veterinary complications while the animal is under anaesthetic that may result in death. The more frequently the rhinos are immobilised, the greater the risk.

In addition, dehorning is incredibly costly, due to the effort of finding the animals and the costs associated with the immobilisation process, especially if needed on a recurrent basis. The actual cost depends on several factors, but current published estimates for dehorning range from US $620 (Kruger National Park) per animal to US$1,000 (private land). It is estimated that it would cost around US$5.8-8.8 million for a one-off dehorning of all the rhinos in Kruger National Park. (In practice, one could never hope to dehorn 100% of the population: some will successfully hideaway and one should never dart a pregnant cow.)

An important consideration in the dehorning debate is whether rhinos actually need their horns. The evolutionary significance of horns in rhinos is not entirely clear, and may include mate choice or anti-predator defence. It is known that rhinos use their horns for several behavioural functions, including defending territories, defending calves from other rhinos and predators, maternal care (including guiding calves) and foraging behaviour, such as digging for water and breaking branches. Male rhinos use their horns during disputes over territory or dominance, so removal of the horn may undermine the ability of a particular bull to retain territory or status. On a positive note, dehorning has shown to reduce fighting-related mortalities among black rhinos in Zimbabwe. However dehorning may also decrease the value of rhinos, whether for photographic or hunting tourism or as a potential live sale.

The issue of dehorning leads on to another ‘thorny issue’ – what should be done with the horns? These could be destroyed; however, they are more likely to be stockpiled by owners awaiting the potential legalisation of the trade. The current permit system for possessing, transporting and storing horn is considered to be onerous and presents a security risk through the leakage of information on the whereabouts of horns. This risk is emphasised by the fact that at least 38 horn-related thefts had occurred by mid-2009, including several armed robberies. In South Africa, there has been a substantial internal trade of rhino horn from natural mortalities and illegally dehorned rhinos and subsequent leakage of horns onto the international black market.

If rhinos are to be dehorned, it should be done in conjunction with a publicity drive to ensure that poachers are aware that the rhinos have been dehorned. If not, there may be a lag effect whereby poachers continue to target rhinos in the area. There is also the possibility that dehorning rhinos in one area simply transfers the risk to horned individuals in other areas.

Dehorning has its place in rhino conservation and, although not a stand-alone solution, recent successes demonstrate that, used alongside other methods, dehorning can be used to protect rhinos. Due to the invasive nature of dehorning, it should only be considered as a last resort under conditions of severe poaching threat. For example, although dehorning is not routinely practised in Kenya, its small population of Northern White Rhino is routinely dehorned due to the exceptional conservation value of being the last remaining individuals of the subspecies.

The first priority for all rhino conservationists should be to ensure adequate anti-poaching monitoring and security (including intelligence-gathering) to protect rhino populations, and only then should dehorning be considered, for is a rhino really a rhino without its horn?

How is dehorning carried out?

Click here to read a 2013 paper by Raoul Du Toit and Natasha Anderson from the Lowveld Rhino Trust, whose research challenges some of the supposed consequences of dehorning