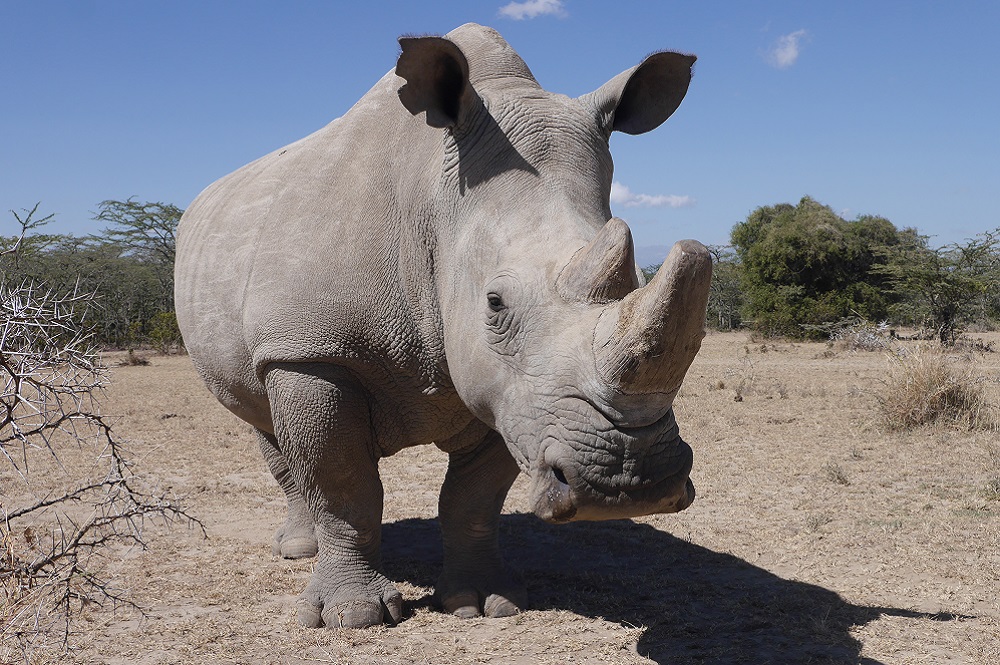 The use of Advanced Reproductive Technologies (ARTs) to save rhinoceros species has most recently come to the fore in connection with the Northern white rhino, Ceratotherium simum cottoni, a subspecies that now has only two individuals remaining on the planet.

This is a very complicated issue. The International Rhino Foundation and Save the Rhino International have the deepest respect for the group of scientists from San Diego Zoo Global in California and the Leibniz Institute for Zoo and Wildlife Research in Berlin, who are working to transform cells from living rhinos into gametes and then use in vitro fertilization (IVF) to create embryos and revitalize the population. We do not, however, believe that the methods will be in place before the last representative of the Northern white rhino subspecies dies.

Despite an unknown (but certainly large) number of procedures conducted over a period spanning more than 15 years, fewer than 10 live rhino births have resulted from artificial insemination (AI). Fewer than 20 rhino embryos have ever been created; the technology to accomplish the aims of this project has a long way to go. IVF has never been used successfully for any rhino species. Each species is very unique and the reproductive physiology is different. IVF requires specific conditions to mimic the uterine environment and it will take a lot of time and enormous funding to perfect the methodology. The teams working on ART for the Northern white rhino are well aware that the surviving members of the subspecies will be long-dead by that time; therefore, the plan is to use Southern white rhinos as surrogates. Nevertheless, establishing a viable pregnancy in a surrogate female may prove enormously challenging.

If and when Northern white rhinos were successfully created, there would be issues over where to locate them: the countries in which they perished are still in conflict and ‘repatriation’ is unlikely. There are complex ethical issues involved: should we ‘recreate’ a species that has gone extinct?

Absolutely, we – the conservation community and international governments – should have attacked the problem more vigorously much earlier. The International Rhino Foundation put millions of dollars into protecting the Northern white rhino in Garamba National Park in the Democratic Republic of Congo but, despite protection, the species was lost there when the Park became a conflict zone and the IRF had to pull out to ensure the safety of its staff. Governments in range states are responsible for conserving their biological heritage but if no political will is present, there is only so much that nonprofits can do.

Certainly, funding at the level that has been raised for the work in San Diego and Leibniz could be well used for field conservation but we do not believe that the donors are the same; thus the funding being used to support this work is likely not competing for funding that would be available for field conservation. There is vast agreement amongst people working with rhinos in the field that protection needs to be increased and better funded, no question. For example, the Howard G. Buffet Foundation’s gift of $24m to Kruger National Park has enabled SANParks to begin to turn around an unprecedented poaching onslaught in the Park using improved patrolling and complex, sophisticated security technology.

Addressing rhino horn use in consumer countries also is essential, and there are many groups that are doing excellent work, e.g., Education for Nature Vietnam, which is one of our grantees. It will be very difficult to change thousands of years of rhino horn use in Traditional Asian Medicine in China, despite laws against it. But in Viet Nam, a new market has emerged in which rhino horn is seen as a luxury item, used as a high-value gift to close business transactions, and as a purported cure for hangovers and even cancer. These are new uses, which hopefully can be addressed by campaigns to stop rhino horn consumption. Again, though, without political will and enforcement of its laws against rhino horn use, Viet Nam is guilty of perpetuating the rhino poaching crisis in Africa.

All that said, there are other rhino species that are in peril, and perfecting the methods for the Northern white rhino may help those species in the future, for example, the Sumatran or Javan rhino (Dicerorhinus sumatrensis and Rhinoceros sondaicus), both of which number fewer than 100 individuals and the former of which is precipitously declining. We are also cryopreserving fibroblasts for Sumatran rhinos to preserve options for the future, and Dr Oliver Ryder’s lab in San Diego has kindly provided training in the methods to extract and preserve the cells. But the technology, which could help to increase numbers very slightly in the big scheme of things, may not be in place in time for Sumatran rhinos either.

For these species, stringent protection in Intensive Protection Zones inside national parks, consolidation of fragmented populations, expanded captive breeding and creating a sense of ownership in local people offer the most hope. The ‘high-tech’ methods are important heuristic science, and should not be off the table. But for now, active conservation in Indonesia is the most important approach. No species has been saved by high-tech approaches alone, but such technologies have proven valuable when integrated with natural breeding and the protection of wild populations. Because there are no wild Northern white rhinos left and the two still alive cannot reproduce naturally, it seems highly unlikely that high-tech approaches alone can save (or resurrect) the subspecies.

The IRF and Save the Rhino firmly believe that when working with any species we need to maximize our options and minimize our future regrets. We need to tackle the challenge facing rhinos using multi-faceted approaches, and ‘high-tech’ science, including the work with the Northern white rhinos, is one of them.

There is no easy answer regarding the Northern white rhino subspecies. It is now functionally extinct. The greatest lesson is that we can never let this happen again with any other rhino species.