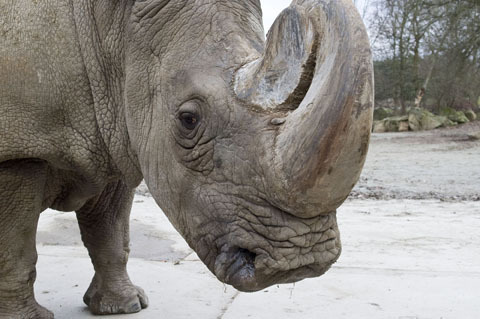 According to the zoo, Nabiré died from from complications arising from a ruptured pathological cyst, which was untreatable.

“Her death is a symbol of the catastrophic decline of rhinos due to a senseless human greed. Her species is on the very brink of extinction,” said zoo director Premysl Rabas.

Nabiré was born on November 15, 1983 at the Dvůr Králové Zoo as one of the only four northern white rhinos ever bred in captivity. She spent all her life in Dvůr Králové.

Nabiré was plagued with reproductive cysts and could not conceive naturally during her life. However scientists had long hoped to harvest eggs from her healthy left ovary to use for in vitro fertilization (IVF). One attempt was made to do this while Nabire was still alive. After her death the ovary was removed and taken to a specialised lab in Italy.

Dvůr Králové Zoo has been heavily involved in conservation efforts of the last remaining Northern white rhinos (NWRs). An initial group of NWRs was brought to Dvůr Králové Zoo in 1975 from southern parts of Sudan. The group consisted of two males and four females. Two individuals of the founding group are still alive – a male Sudan lives in Ol Pejeta in Kenya and a female Nola is located in San Diego.

In addition to these, there are two more NWR females – Nájin and Fatu, both of them born at the zoo at Dvůr Králové. Together with Sudan, they were translocated to Kenya in 2009.

Read more about the plight of the Northern white rhinos