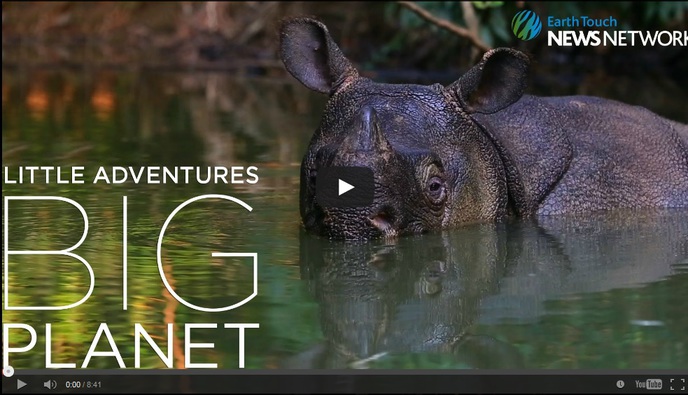 Last year, wildlife photographer Stephen Belcher travelled deep into the Indonesian jungle on his crowd-funded expedition to capture the elusive Javan rhino on camera. Stephen took several hundred high-quality photos from 14 different Javan rhino sightings, and he also recorded film footage of the species. Below is the link to his must-watch documentary, which provides a unique insight into the critically endangered Javan rhino.

The Javan rhino is the rarest of all five rhino species, found only in one isolated population in Indonesia’s Ujung Kulon National Park. Up until recently less than 50 Javan rhinos were thought to exist. However last year, a study using video camera traps yielded images of 58 (possibly as many as 61) individually identifiable rhinos, providing hope for the species’ recovery.

The work of the Indonesian Rhino Protection Units (RPUS) is essential for the future survival of the species. Four RPU teams regularly patrol Ujung Kulon National Park to protect the Javan rhinos and other wildlife. Though they rarely see the Javan rhinos, they record vital signs such as footprints, dung, wallows and feeding signs. They also detect and deter other illegal activities such as fishing, hunting and snares.

Thanks to the efforts of these RPUs, there have been no recorded incidents of Javan rhino poaching in Ujung Kulon National Park for more than 15 years.

Recent conservation activities for the Javan rhino have focused on increasing the amount of suitable habitat for the species at the Javan Rhino Study and Conservation Area, by removing the invasive palm known locally as langkap, This palm plant is fast growing and can quickly dominate the lowland forest canopy, suppressing the growth of other plant species favoured by Javan rhinos. The project has been going for over two years and around 80 hectares of the invasive plant has been removed so far. The great news is that there is now evidence of ten rhinos using this previously unused area.

The long-term goal is to move a group of Javan rhinos from Ujung Kulon National Park to establish a secondary population, to provide security for the species’ future survival.

Save the Rhino helps support the work of Yayasan Badak Indonesia (YABI) which manages the RPUs, by providing funding through the International Rhino Foundation.

Click here to find out more about Stephen Belcher’s photography.