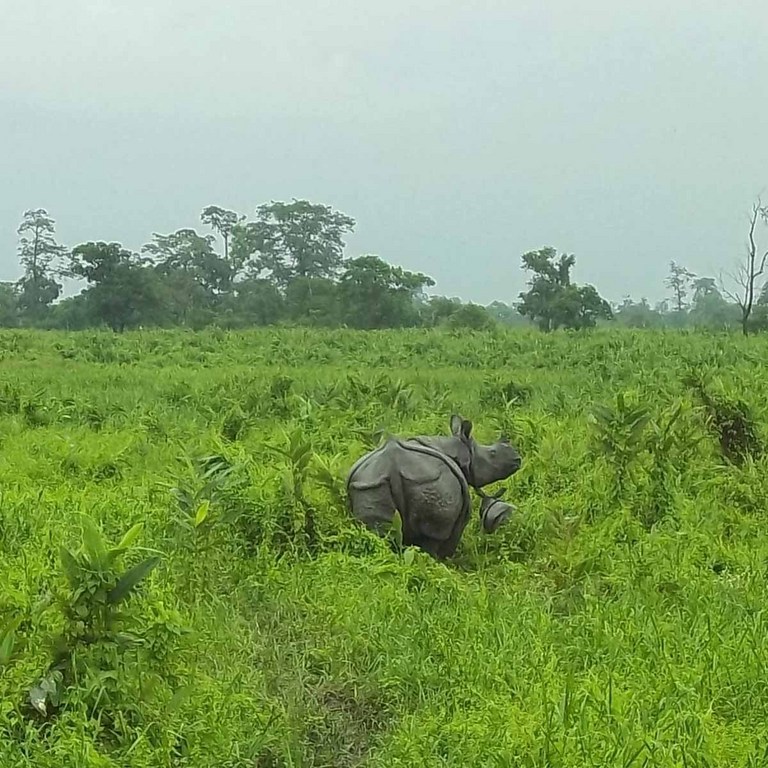 A fifteen day old greater-one horned rhino calf has been left orphaned, after its mother was gunned down, killed and dehorned by poachers in Manas National Park.

This shocking loss of the female known as ‘Rhino 17’, comes shortly after the good news of the two calf births in the Park. In late March, rangers confirmed the sightings of two rhino calves belonging to Rhino 17 and Rhino 8. The females were translocated into the Park as part of the Indian Rhino Vision 2020 Programme (IRV 2020), which aims to expand India’s Greater one-horned rhino population.

Upon discovering the carcass of Rhino 17, ranger staff on the ground launched an immediate widespread search to find the orphaned rhino calf, which would be unable to survive without its mother’s milk. The large search team luckily managed to find the calf around 3km from where its mother had been killed. The traumatised and dehydrated calf was darted captured and brought to a rescue facility where it will be hand-reared.

It is still early days for the calf, but it has now taken its first milk bottle – an important step in the hand-rearing of any animal. Rhinos are incredibly dependent on their mothers for the first few years of their lives, but rehabilitation experts are taking the best possible care of the young rhino orphan.

Rhino 17 was translocated to the Park in 2012, as part of the Indian Rhino Vision 2020 Programme (IRV 2020). The rhino was one of 18 rhinos that have been translocated to Manas Park, 10 from Pobitora Wildlife Sanctuary, and eight from Kaziranga National Park. The programme is a joint government and NGO initiative which aims to increase the rhino population in Assam from 2,000 to 3,000 by the year 2020 and ensure the rhinos are distributed over at least seven Protected Areas to provide long-term viability.

Over the last few years, sadly four of the translocated rhinos have been killed for their horns, as opportunistic criminal gangs have started targeting the rhinos in Manas National Park.

Urgent funding is needed to ensure ongoing and increased protection for India’s rhinos as the threat for poaching continues to grow. You can donate to the Indian Rhino Vision programme by visiting our online donation page