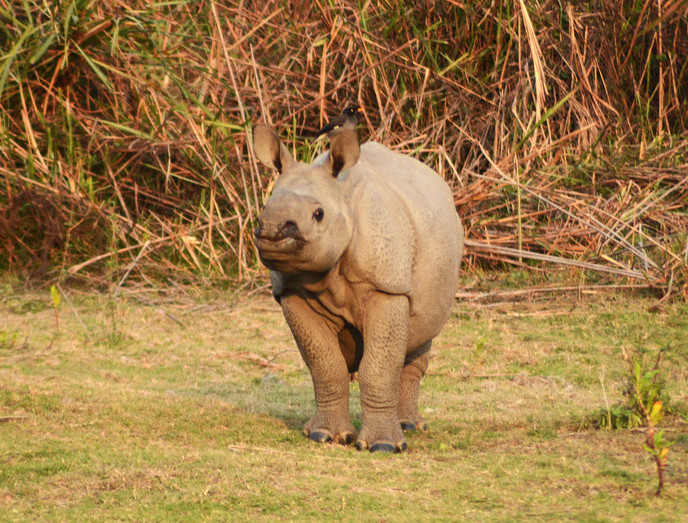 Manas National Park had been a place I had heard lots about prior to my visit, partly because of the work SRI has supported there, but also because of the increasing pressures of poaching. However, I knew very little about Bura Chapori Wildlife Sanctuary, our next destination. Bura Chapori is the next planned location to where four rhinos will be translocated later this year. When we arrived we were greeted by Minister Rakibul Hussain who had travelled 3 hours to the Park to welcome us but he only had 30mins before he had to be back on the road again. I have never met such a young and fashionable minister; he certainly could show David Cameron a thing or two when it comes to dress, Rakibul is a bit like a Bollywood star and the press seemed to think so too. There was a press frenzy taking photos of the minister and these strange charity workers who were so interested in their rhinos. The press aside, Rakibul is a strong supporter of the IRV2020 programme; without his support the programme could very much come to a standstill. We often say that politicians need to do more than pay lip service to protecting wildlife, so it’s great when you come across one that is really trying to do the right thing for the wildlife and not just his image. It is not always easy though. Rakibul had hosted a meeting for the IRV2020 at the start of our trip when the scientists, NGOs and vets offered their suggestions to ensure the security of Greater one-horned rhinos in Assam. Rakibul Hussain talking to the media Bura Chapori is located between Orang and Kaziranga National Parks and so is an important corridor for animals between these two Parks; it currently has no rhinos. The Park’s Forest Officer, Ship Kumar took us to the area the rhinos will be translocated to and showed us the plans that were very impressive. After a couple of hours at Bura Chapori, we were back on the road again to Kaziranga. Ship Kumar takes Susie Ellis and me through the translocation plans

Kaziranga National Park can be seen from the side of the main road; speed bumps have been put along the road called ‘animal crossing’ as this has been the scene of many animal deaths, including rhinos, as they try to escape the rising water and cross the road. As we approached the Park the car suddenly pulled across to the side of the road. We all got out wondering if a goat or another poor animal had been hit, Bibhab pointed out in the distance three rhinos. All of the team got very excited, to which Bibhab’s response was “You haven’t seen anything yet, I promise you will see over 100 rhinos”. This was a deal we all happily agreed to but didn’t really believe would happen.

Over the next two days we went around the Park and saw countless wildlife including rhinos. Sometimes I couldn’t tell at first if it was a rock or a rhino (from a distance there is a similarity) but when looking through a pair of binoculars I was proven once again that Kaziranga has lots of rhino and not so many rocks. Luckily we didn’t just see rhinos from a distance and had some magical encounters with mothers and calves, obviously still having to keep a safe distance. Although these rhinos are used to tourists they are still very much wild. An encounter with an animal the size of a GoH rhino is both thrilling and terrifying – there is nothing quite like it.  Rhino means “self-sufficient”  in India and when you see the rhinos in Kaziranga it’s great to see that they do live up to their name.  Bibhab managed to not only deliver his promise to us to see 100 rhinos but he smashed it, we saw a total of 120 rhinos. After returning to the UK, I know that I have not only learned a lot about the fantastic work being carried out in the IRV2020 programme but I also know that it has given me even more motivation than ever to help save these magical animals. Mother and baby rhino slinking off into the elephant grass

Deputy Director Save the Rhino International

Photos: All photos were taken by Bill Konstant from IRF