You are here: Home » News » How can piglets help conserve India’s rhinos? 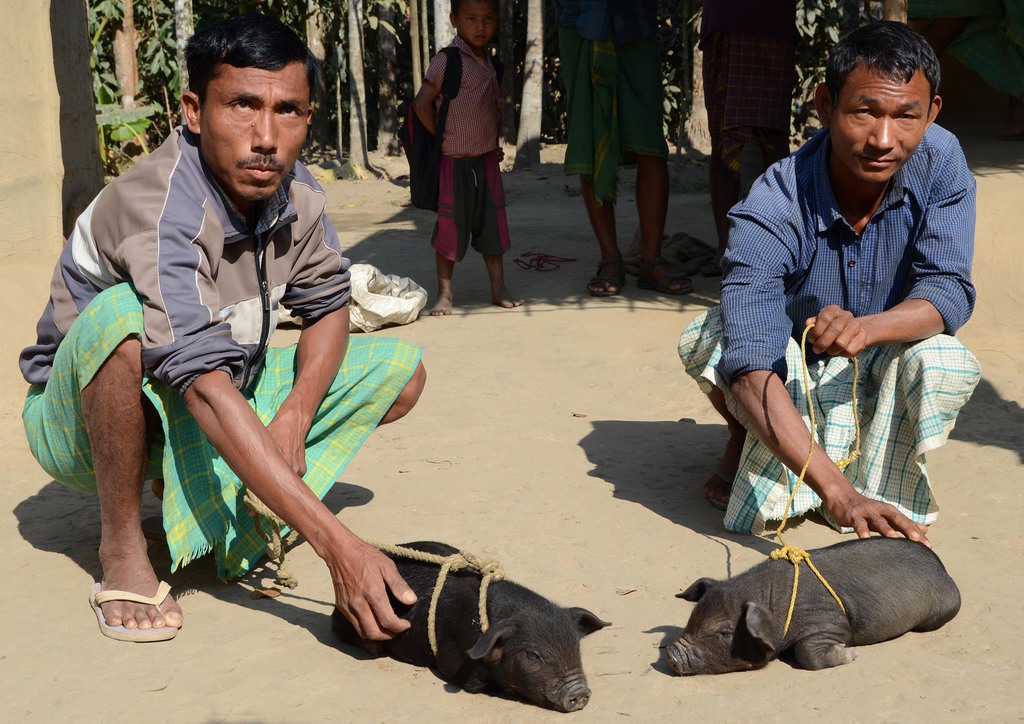 Piglets are unlikely to be one of the first things you associate with rhino conservation! So let us explain how these little creatures are being used in a scheme to assist the protection of India’s Greater one-horned rhino population….

The Indian Rhino Vision 2020 (IRV 2020) was launched in 2005, and aims to increase Assam’s Greater one-horned rhino population to 3,000 across seven key habitats by the year 2020. Since 2008, 18 wild rhinos have been captured and translocated to Manas National Park in Assam, supplemented by additional animals from a rehabilitation centre. There have been several calves born; however with heavy poaching pressure the Park’s population is struggling.

To ensure the survival of the translocated rhino, it is essential to gain support from the local communities surrounding Manas National Park and Laokhowa-Burachapori Wildlife Sanctuary.

Save the Rhino is supporting two local community-based NGOs to work at the grassroots level in the two sites, to implement livelihood and awareness activities through a small grants programme. As with rhinos everywhere, poaching will likely always remain a cause of concern for rhinos in these areas, but could be curbed by creating mass awareness and through working with communities living in the fringe villages near rhino-bearing areas, creating a strong sense of ownership and thus strengthening a second line of defence. Here, the relationships between NGOs – independent from the government and in many cases trusted more by villagers – and individuals become crucial.

In Manas, the local NGO Manas Ever Welfare Society will be carrying out phased rhino conservation awareness and livelihood support to villagers living adjacent to the Park. Piglets will be provided to villagers closest to Manas National Park as a sustainable livelihood incentive. The project’s pilot phase has been very successful and well received by local people; and a grant from Save the Rhino will allow expansion to a wider range of villages. We envision that this will build a strong community shield, which will contribute to securing the remaining rhino population inside the Park.

Then, from late 2014–2017, when rhino translocations are underway in Laokhowa-Burachapori Wildlife Sanctuary, we plan to engage a local NGO, Laokhowa-Burachapori Conservation Society, to carry out awareness activities around the Sanctuary. As this is a predominantly Muslim area, we will work with our local NGO partner to determine the best livelihood-enhancing mechanisms for local villagers; pigs would not be used for religious reasons.

The NGOs plan to make communities realise that they are receiving support through the small-grants scheme because of the existence of rhino in their ‘neighbourhood’ and that they, as community members, play a critical role in ensuring safety of the rhinos if they stray out of the Park / Sanctuary into villages. By engaging with the local communities, it is hoped to build rhino-friendly fringe communities around the rhino areas to help ensure the overall success of IRV2020.

Read more about the IRV 2020 programme

2 thoughts on “How can piglets help conserve India’s rhinos?”