You are here: Home » News » Time with the Save the Rhino Trust team 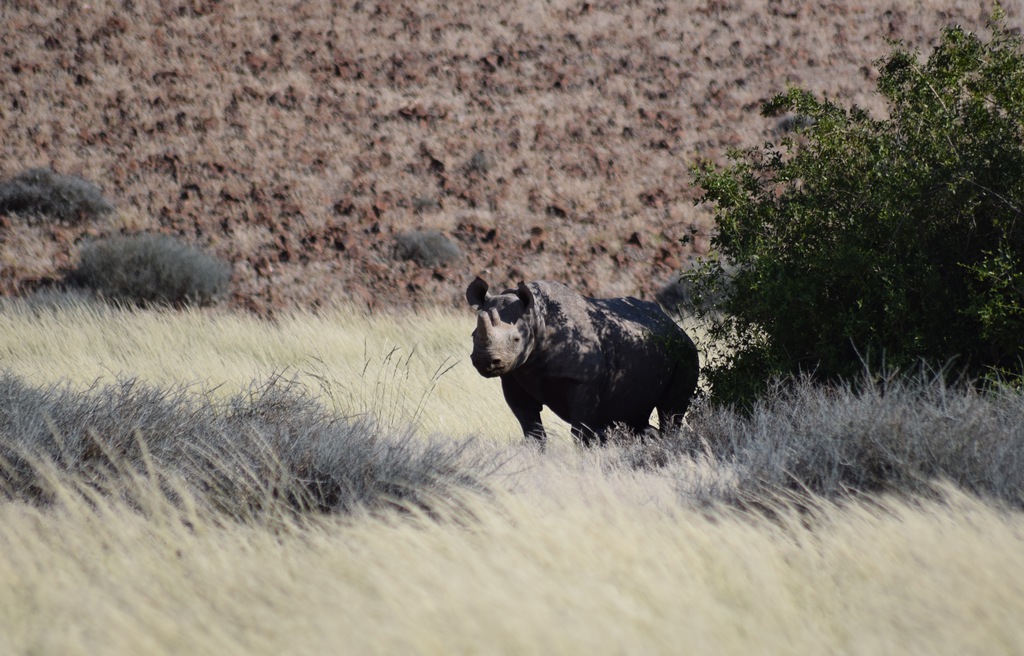 What struck me most about the SRT trackers was their incredibly deep knowledge of both the area and the rhinos inhabiting it. Whilst navigating over rocky tracks Sebulon was able to spot High 8, a male black rhino, blind to my eyes, half hidden behind a Euphorbia bush 150 metres away. We were on a 5 hour round trip to deliver a fresh water barrel to rangers deep in the bush, you really can’t appreciate how rugged the tracks are until you are bouncing over them in a 4×4, hours from the nearest toilet…

We pulled up the truck to approach High 8 more closely on foot, Sebulon nipping quickly over the rocks in sandals, me stumbling behind in clunky boots. Whilst they have incredibly sensitive hearing and a strong sense of smell, rhino have relatively poor vision, allowing us to approach a little closer by staying quiet and downwind. However, it is obviously imperative to keep a sizeable distance for both our own safety and to ensure the rhino is not disturbed. As we neared I climbed a tree to get a better shot of the handsome young chap, an extremely lucky first day in the field!

On my second day I spent time with Mbaripo, SRT’s relatively new Data Management Officer! Mbaripo’s primary job is inputting the rhino data collected by the trackers into SMART (Spatial Monitoring and Reporting Tool), a software which allows SRT to store, analyse and evaluate the vast amounts of data they are collecting in the field. Whilst discussing the current poaching crisis Mbaripo commented “when I hear a rhino has died it feels like I have lost someone I know”, a comment which stuck with me.

Whilst extremely busy with the hands-on work, the SRT team at Mai Go Ha are acutely aware of the importance of their donors, and are so thankful to them for supporting their vital work.