You are here: Home » News » News from the Dog Squad 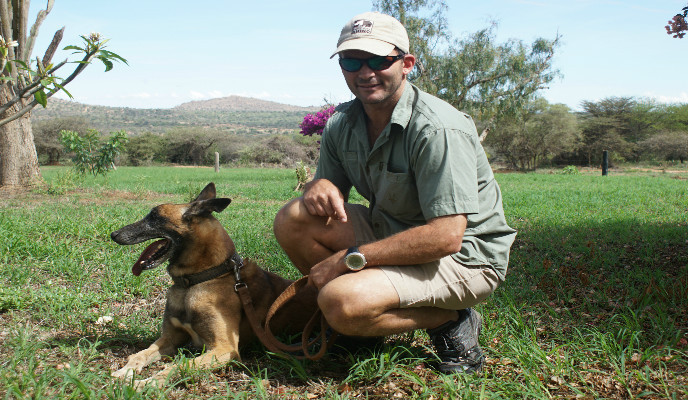 Ol Jogi has two attack dogs (both are Belgian Malinois that are trained to bite and hold poachers until the rangers can move in safely to make an arrest) and two fully trained detection bloodhounds called Biza and Bagbo. In addition, Ol Jogi is currently training four bloodhound puppies. Nyota, one of the dogs that featured in our Rhino Dog Squad appeal, developed cancer and had numerous tumours; very sadly she had to be put down. Peter Maina is the ranger in charge of the canine unit at Ol Jogi – he’s worked there for 21 years, and for the last 17 years he’s focused on the dogs’ section. He’d had dogs at his home – the generic mongrel type you find in Kenya, who act as alarms if a predator comes near to their livestock – and asked specifically if he could join the canine unit.

When I visited the section, the dogs were excited. They usually deploy for training practice in the afternoons; I was a morning visitor and they wondered what was up. While we took photos, they only had collars and leashes on; when they’re training, they wear full harnesses; they then know that they are working. Peter explained how they train the puppies, starting with scent trails only 100 metres long and then slowly extending that; by now, Ol Jogi’s puppies can follow a scent for up to 2 kms. They get a reward each time they go out, whether training or live deployments, and they love their work – and their rewards (a raw Farmer’s Choice pork sausage).

The experienced dogs are occasionally called out to other regions in Kenya for serious cases. Ol Jogi’s bloodhound rangers are not armed, while those with the attack dog teams are; all canine unit patrols on live deployments have to be accompanied by law enforcement officers to protect the dogs and their handlers. Human scent is carefully captured: rangers sweep some dust from around the footprints into a zip-lock bag while wearing plastic gloves; the dogs then smell the contents of the bag and hunt round to find the trail. The scent samples can be stored in the fridge so that, if at some later date, a suspect is included in a line-up (usually of 10-15 people in total), the handlers can get the dog to smell the scent again, and then try to pick out the suspect. The bloodhounds are trained to identify the suspect by standing up on their hind legs and putting their paws on the person’s chest; invariably, they’ll go along the line or through a crowd sniffing around, but then home in on the person whose scent they’ve been taught to find.

Peter Maina and his team occasionally have to give evidence in court. Although the dogs themselves can’t give evidence, the detailed training records that Ol Jogi keeps can act as valuable supporting evidence, backed-up by good chain-of-custody records for any other bits of DNA evidence captured from any items left at the crime-scene.

Ol Jogi plans to use some of the funds raised from our Rhino Dog Squad appeal to redo and expand the kennels; Conservation Manager Jamie Gaymer and Peter Maina discussed the layout of the kennels and the building programme while I was there.The canine unit is an incredibly important part of Ol Jogi’s anti-poaching strategy, both as a deterrent (neighbouring communities have seen how successful the dogs are at helping them recover stolen or lost property) and as a crime-solving team.

Photos top to bottom: Jamie Gaymer and one of Ol Jogi’s attack dogs, Biz and Bagbo relax in a temporary pen, and Jamie and Peter Maina prepare to train the Dog Squad.

One thought on “News from the Dog Squad”