Lolesha Luangwa is a pioneering environmental education programme working with 21 local schools from the surrounding areas of the North Luangwa National Park in Zambia.

In the 1960s, Zambia’s black rhino population was the third largest in Africa. But just two decades later Zambia’s rhinos were hurtling towards extinction from poaching, and by 1998, several years after the last confirmed sightings, black rhinos in Zambia were declared extinct.

But the story wasn’t over. With improved security to get poaching back under control, a pioneering project starting in 2003 saw the reintroduction of black rhinos to the park. The translocated rhinos are doing amazingly well and the population is growing. The project was a result of the partnership and work between the Zambian Government and the Frankfurt Zoological Society to protect the North Luangwa National Park.

When the plans for the translocation were agreed, very little was known about the attitudes of local people towards black rhinos and the reintroduction. Communities surrounding the border of the National Park are subject to greater threat from wildlife, through human–wildlife conflict, crop raiding, and danger to their lives. Community education was identified as a strategy to engage support from local communities who may never even see a black rhino.

How is Lolesha Luangwa programme tackling this problem?

The support of local people living close to rhinos is a crucial element in their protection. Most of the children living around the National Park have never seen a rhino and are curious what they look like and why they should protect them. These children will be the guardians of rhinos in the future and it is important to win their hearts and minds through awareness and education.

Lolesha Luangwa (“Look after Luangwa”) conservation education programme targets communities in three Game Management Areas surrounding North Luangwa National Park in Zambia. It aims to win the hearts and minds of local communities, teaching them about flagship species such as the black rhino, and engaging them in positive environmental action to support the long-term security of these species. The content is carefully designed to align and integrate with the Zambian national curriculum to disseminate specific messages to communities, using schoolchildren as message multipliers. Lolesha Luangwa began in 2003 and has been substantially revised, improved and expanded since Save the Rhino first funded it in 2006.

Many local schools lack electricity and have limited resources but the education is so revered to those who can afford it that children will walk several miles to attend school. The Lolesha Luangwa programme aims to teach the children about conservation so they will share this knowledge with their families and friends and help spread the message about the importance of protecting the black rhino and other wildlife.

In 2016/2017, 351 lessons were delivered to children in 21 schools surrounding the North Luangwa National Park; 1,950 Activity Booklets and 30 Teachers’ Conservation Guides printed and given out; 21 Rhino Races and Rhino Soccer Competitions completed; 11 Park visits for 220 learners and 22 teachers completed; and much more.

Sylvester Kampamba, former Lolesha Luangwa Education Officer came third in the “Education and Awareness” category of the GRAA’s Rhino Conservation Awards 2016, and he was made a Disney Conservation Hero in 2016. Preliminary analysis of 2016 monitoring and evaluation data indicates that participants’ knowledge base on North Luangwa National Park, conservation and black rhinos has increased. And most importantly, no black rhinos were poached in North Luangwa National Park, and the rhino population is achieving more than 8% growth!

“It’s really nice that so many kids came out wanting to teach people about what they have learnt and also recognising that it is important that they should spread the message. Feedback overwhelmingly tells us that the learners have told their friends and family about Lolesha Luangwa, conservation in general and more specifically black rhinos. When questioned what they had said, many responses focused on telling people not to cut down trees, kill animals, litter the environment, as well as encouraging people to protect water sources, care about conservation, and that North Luangwa National Park is very important.

Also, a big take home message from all Lolesha Luangwa interventions is that poaching is wrong and that they should report poachers, which is great because they know what actions they can take and to whom to report.” Claire Lewis, Technical Advisor, North Luangwa Conservation Programme 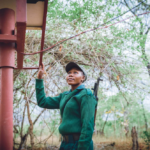 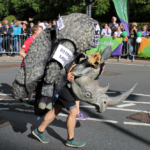 Congratulations to our 2021 London Marathon team! 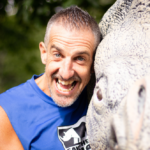 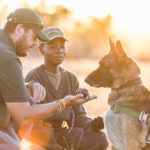 A day with the dog squad