You are here: Home » News » Will Travers and John Hume debate the legalisation of the rhino horn trade 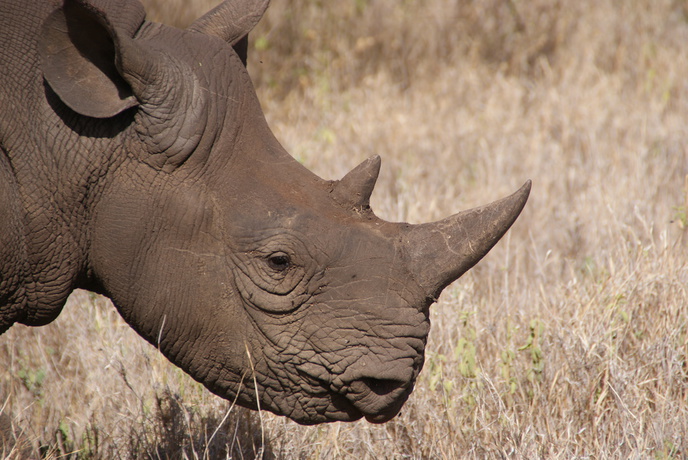 On Wednesday 3 August 2016, Craig Packer, a professor in the Department of Ecology, Evolution and Behaviour at the University of Minnesota moderated a lively debate on whether the global rhino horn trade should be legalised.

Arguing for the lifting of the current CITES ban was John Hume, South Africa’s largest private rhino breeder, with almost 1,400 rhinos living on his property. Arguing against the motion, Will Travers, CEO of Born Free Foundation and President of Born Free USA, took to the stage.

Professor Packer began proceedings with an introduction to a millennia of horn use across south east Asia, recent population and poaching trends, and the key questions arising from the debate topic. Aware of the controversial and highly emotive nature of the debate, he hoped the audience and speakers could find common ground – rather than polarising opinion.

Would the debate change their minds?

Both speakers were invited to summarise their stance, and the audience held a vote on whether they were for or against legalising the trade. Travers took to the floor first, commenting that “on first glance harvesting seems to offer a win-win situation”, he then critiqued Swaziland’s proposal to open up trade, focusing on the facts that a two-thirds majority from CITES Parties was unlikely in any case but, furthermore, debating trade encourages poachers. Travers argued that markets are complex, and legalising trade can cause unforeseen circumstances. It is not the case that a regulated market will function in the way we want it to.

Hume then outlined why he is in favour of legalising the global trade, making the case that “trade bans don’t stop the trade, the only push it underground to the illegal channels” and criticising those who expect local people not to want to sell local assets when they desperately need livelihoods.

The Debate starts in earnest

The debate began with questions and comments from the audience. Had the existing trade ban created the current poaching crisis?

Travers objected the argument that there was a correlation between the introduction of domestic moratorium and the huge surge in poaching throughout the last decade. He pointed out that between 1997 and 2007, the ban was very effective. He saw the origins of the current crisis in 2005; when South Africa and Swaziland successfully had their white rhino populations downlisted for trading and hunting, combined with a rapid growth in the Chinese middle class during the same period and a rumour across Viet Nam that rhino horn was a cure for cancer.

As noted by the moderator, the 2007 one-off CITES sale of ivory stockpiles saw illegal poaching spike in the following years, a trend still continuing. At the time, economists were split into two camps, arguing that the sale would reduce or grow poaching. Based on this incident, the latter appeared to have been right.

Hume argued that had the sale been conducted properly, it would have succeeded better. According to his estimates, South Africa could sell 30+ tonnes of rhino horn sustainably, and meet demand.

When it came to looking at the communities living alongside rhinos, both Hume and Travers found some common ground.

However, whereas Travers was optimistic that local people, especially in Kenya, can make money from wildlife – citing the recent stockpile burning as part of a grassroots movement – Hume was more pessimistic, citing a statistic that between 2009-2013 Kenya’s wildlife has reduced by a quarter, and also commenting that Kenya’s tourism sector has also contracted.

In terms of the role of governments and the international community, Hume was sceptical, telling the panel that they didn’t understand Africa:

Travers argued for a framework of “World Heritage Species” and made the insightful claim that Viet Nam is often a “staging point” for the Chinese market, and there are examples of demand reduction projects coming to fruition, with shark fin a notable success in recent times.

Hume argued breeding rhinos and selling their horns is not morally wrong. Rather than a “begging bowl” for donor funding which is in short supply, legal trade would help him and many others like him to cover the cost of protecting rhino populations.

Travers argued that the crux of this debate reached far wider. Our relationship with nature has transformed throughout history from hunter-gatherer to explorer and now exploiter. We face three futures: the demise of wildlife, the commodification of wildlife, or a tough option, an option which doesn’t put us first.

Before the debate 30% voted in favour of legalisation and 62% against. A remaining 8% were undecided. At the close of the evening, 39% voted “for”, 60% “against” and only 1% were undecided. Whilst the majority remained against legalising the trade, the opportunity to hear passionate speakers discuss such a complex issue did swing some votes, and helped those without a firm view solidify their thinking.

For full notes of the evening’s debate, check out Save the Rhino International’s Director’s blog post here.

How would you vote? Let us know in the comments below.