You are here: Home » News » Widespread rhino poaching across Africa 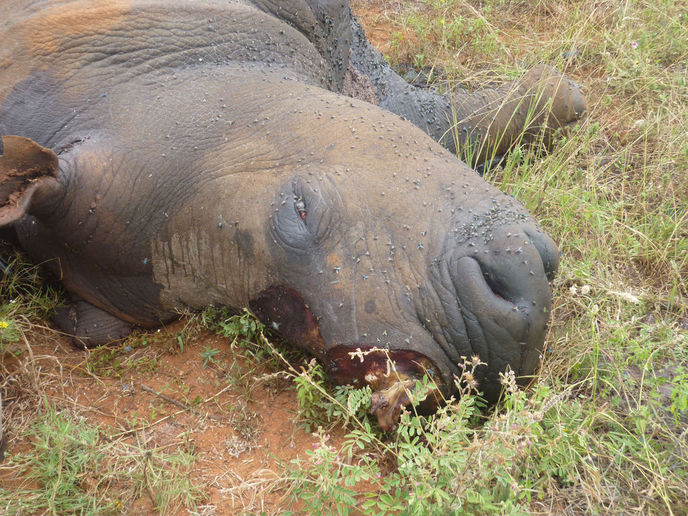 Along with the rising poaching toll in South Africa, in the past month, there have been numerous rhino poaching incidents in other African countries including Zimbabwe, Kenya and Namibia. Conservationists always fear for the end of the calendar year, when there are traditionally spikes in rhino poaching deaths.

Zimbabwe
In early November, there were reports that two white rhinos were shot and dehorned in the protected Matopos National Park. There are widespread fears of increasing wildlife poaching in Zimbabwe, especially following on from the tragic cyanide poisoning in Hwange National Park, which led to the deaths of around 300 elephants since July this year.

Kenya
According to recent news reports, poachers have killed and dehorned a 17-year old black rhino in Lewa Wildlife Conservancy, in Kenya. The rhino was suspected to have been heavily pregnant and also had a two-year-old calf.

Lewa Conservancy is one of the most heavily protected wildlife refuges in the country, with armed rangers, dog patrols, aerial surveillance and 90 miles of electric fences surrounding the park. The rhino was killed during a full moon, which is known as a prime time for rhino poaching due to the brighter light conditions.

We understand that over 40 rhino (black and white) have been poached so far this year in Kenya. Kenya is home to a total of around 1,025 black and white rhinos, so on that basis, Kenya has lost 3.9% of its rhinos in 2013. Given that the average annual growth rate of any given rhino population is 5%, we are getting close to the point where poaching deaths together with natural mortalities will overtake rhino births.

Meanwhile, the UK Government has announced that it will send 25 British Army paratroopers to Kenya, to help support the fight against wildlife poaching. The army personnel will provide patrolling and field training to members of the Kenyan Wildlife Service (KWS), Kenyan Forestry Service (KFS), and Mount Kenya Trust (MKT) over the next few weeks.

Namibia
At the end of September, officials announced that two white rhinos had been found dead with their horns removed at a farm near the city of Karibib in Namibia. It is believed that one of the rhinos killed was also pregnant.

The investigation team, comprised Nampol officials, Ministry of Tourism and Environment rangers and representatives from the Save the Rhino Trust. The cause of death, could not be determined, as no bullet wounds or evidence of fire arms were discovered on the scene.

Click here to donate to help support our rhino conservation programmes, in all three of these countries.

One thought on “Widespread rhino poaching across Africa”