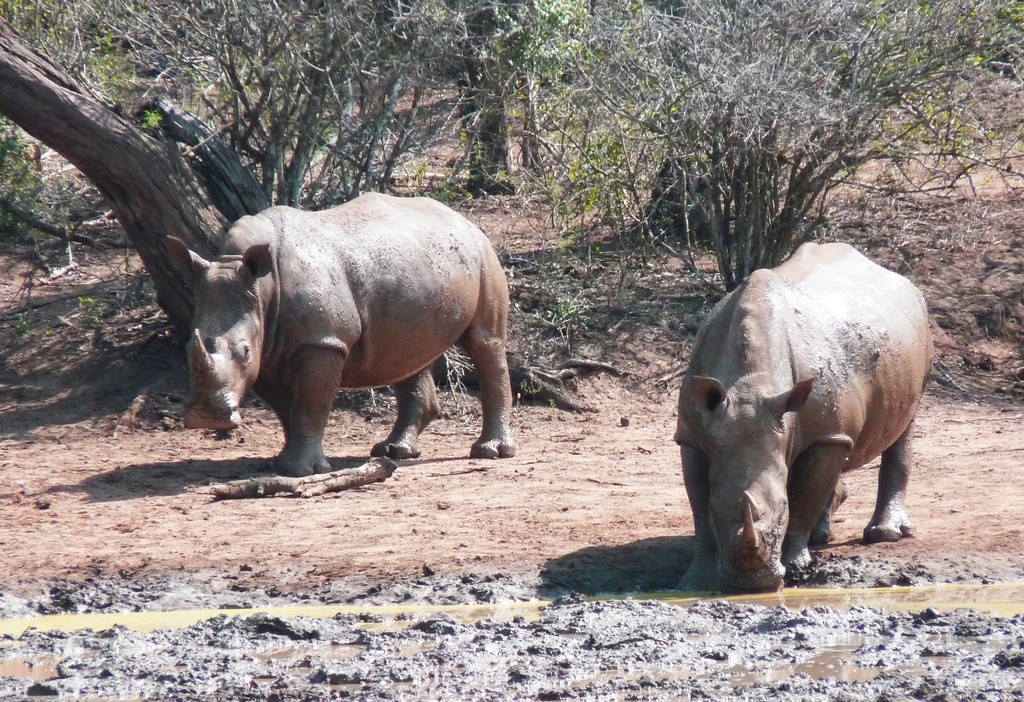 The poaching of South Africa’s surviving rhinos has shifted its focus away from the increasingly well-protected Kruger National Park to centre on the parks and reserves of KwaZulu-Natal (KZN) and smaller private reserves. This, amid complete confusion about whether a viable and regulated legal trade in rhino horn will be established by legislation (rather than the current limbo following the Constitutional Court’s striking down of the 8-year moratorium on domestic sales), and whether sales of horn by private rhino owners will lead to a totally new situation without a viable regulatory process and the danger that legal domestic sales will lead to covert exports or laundering of poached horn.

Until 2009, the domestic trade in rhino horn was legal in South Africa. Those private owners who had rhino, could sell the horn from natural mortalities or from animals de-horned to protect them from poachers. In late 2016, poached horn reportedly fetched up to US $65,000 per kg in Vietnam; there is little evidence that demand-reduction campaigns have reduced the size of the market or prices. The moratorium followed reports by Julian Rademeyer and others of the way that fake trophy hunts, ‘pseudo hunting’, were being used to circumvent the CITES export ban. Trade monitoring groups and conservation NGOs worry that legal domestic sales will lead to illegal exports to Vietnam and China through the development of a ‘pseudo trade’ with legally bought horn being taken out of the country ostensibly as personal effects, rather than as a commercial commodity or as hunting trophies. Some of those in the pro-trade camp with whom I’ve corresponded take the view that if non-lethal horn does supply some demand in Vietnam via a route like this, it will at least replace poached horn. But this is an argument that, while containing an element of truth, will not help the cause of those who argue that the establishment of a legal, regulated international trade will drive down poaching as it appears to accept that using very questionable loopholes is OK.

The ban enraged private rhino owners like John Hume (who has 1,500 rhinos on his Buffalo Dream Ranch 200 km west of Johannesburg) and other members of the Private Rhino Owners Association (PROA). They said it deprived them of income from legal sales that would enable them to continue breeding and protecting rhino. Hume and other private owners launched a court challenge, arguing that the moratorium was unconstitutional as there had been no consultation process. The government contested the action but lost the case in South Africa’s highest court, the Constitutional Court, in April 2017.

In February, anticipating the court verdict, South Africa’s Environment Minister, Edna Molewa, published draft legislation for a legal trade in rhino horns that, controversially, proposed allowing the export of two horns per person “for personal purposes”. Hume meanwhile drew up plans for an internet auction of horn from his legal stocks and applied for permits. He also had the online advertising of the auction translated into Vietnamese and Chinese, to attract buyers from the major markets for poached horn.

Hume originally intended to launch the 3-day internet auction on 21 August but was delayed to 23 August by the need to go to court again to compel the government to provide the necessary permit for the legal sale. The auction involved the sale of 264 rhino horns from Hume’s large stocks. Foreign buyers were able to bid to buy but the purchased horn has to stay in South Africa. Investors would buy horn in what is essentially a futures market, hoping that international commercial trade would be legalised at some point and they could then cash in on their investment.

The auction went ahead with the government making clear that the following conditions had to be met:

Hume has said he is complying fully with these conditions.

But the auction was not a great success. Fewer bids and lower sales were registered than Hume had hoped. In a statement to the media after the closure of the sale, Hume admitted disappointment and blamed the government’s slowness in issuing permits and the need to go back to court to force them to do so. Times Live in South Africa reported Hume’s official statement on the auction as saying that it was hampered by having to go to court for an urgent order against Minister Molewa and her department‚ who “appeared to make every effort to derail the auction and to discourage participation therein”. It added, “despite the fact that Mr. Hume only received the auction permit on the morning that bidding was scheduled to commence‚ our client achieved what he set out to do more than eight years ago: the establishment of a legal trade in a renewable natural resource to generate desperately needed funding to protect rhino as a species under siege”. This claimed establishment of a legal trade was lauded by PROA, but the Association issued a statement admitting that the auction had failed to attract as many bids as hoped for and fiercely criticising the government for the delays in issuing permits and what it called “bullying tactics”.

What will happen next?

The poor response to the auction and the evident hostility between PROA, Hume and the government does not suggest a smooth way forward and presages further conflict and very likely further court actions. This will not do anything to provide answers to rampant poaching, rather it will encourage poachers to keep up the level of poaching. If there is a threat of a legal trade but slow progress towards it, this would be a greater incentive for poachers to poach now in case their illegal trade is in the future superseded by a legal one. A long time frame before a legal solution is found in South Africa will be a death sentence for more rhinos.

Concerted action now by government and owners working together to provide a legal framework, a system of regulation and monitoring — given that the courts have prevented the government from continuing the ban on domestic trade in horn — would be far more efficacious than the current mess in which the failure of the government to develop a viable structure and regulations for trade and the dogfight with the private owners only sows confusion, whose sole beneficiaries are poachers and smuggling syndicates.

Unpalatable though it may be to many, controlled sales of horn would reduce poaching by meeting some demand. I have no illusions that this would end all poaching. But regular sales that are certified and monitored could cut out the speculators who buy poached horn, hoard it, push up the prices and drive forward the pace of poaching and so the demise of the rhino. The income from legal trade could improve a broad range of conservation measures, including local community development to reduce the lure of poaching income and more sophisticated, less heavy-handed anti-poaching operations.

These need to be accompanied by more vigorous prosecution and imprisonment of those who run the poaching and smuggling operations as too often they evade jail for their crimes and are able to delay prosecutions for years or get away with derisory fines.

Professor Keith Somerville teaches at the Centre for Journalism and is a member of the Durrell Institute of Conservation and Ecology at the University of Kent. He is a Senior Research Fellow at the Institute of Commonwealth Studies and research associate at the Marjan Centre for the Study of War and the Non-Human Sphere at King’s College, London and at the School of Advanced Study, University of London. His latest publications are Ivory: Power and Poaching in Africa and Africa’s Long Road Since Independence: The Many Histories of a Continent.