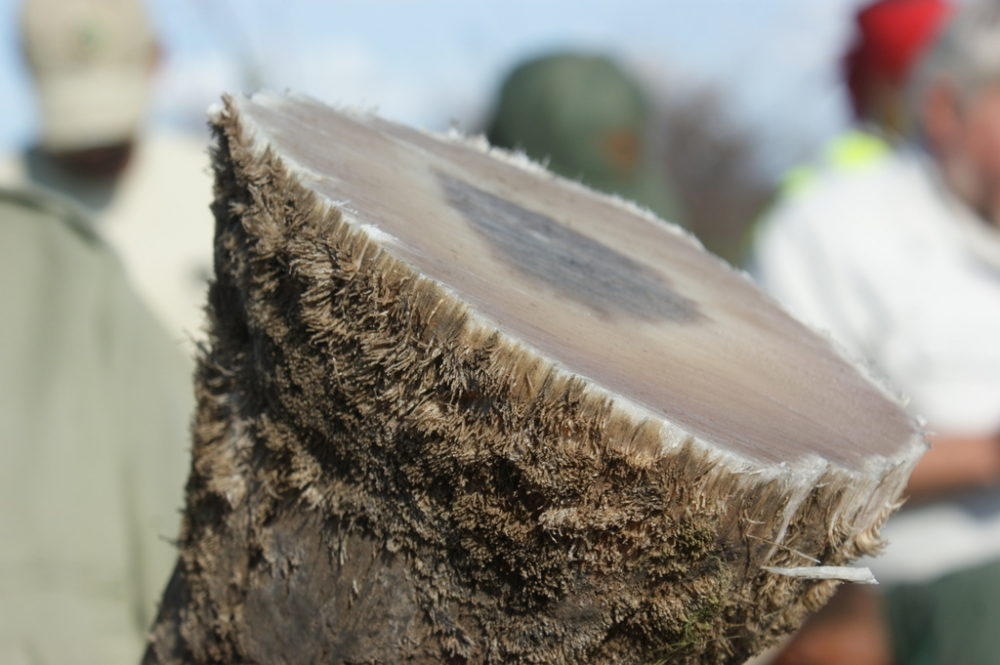 Two of the notorious van Deventer brothers have been arrested again for rhino poaching. Their latest run-in with the law comes a decade after the pair were first charged in connection with the “Boere rhino mafia.”

Afrikaners Deon and Nick van Deventer, aged 48 and 51, were arrested together with a Zimbabwean national Onward Muchangowa. The trio were caught by the South African authorities in Limpopo. Realising they were being tailed by police, they allegedly attempted to jettison a rhino horn they were carrying from their vehicle by throwing it out of the window. The authorities retrieved the horn and arrested the brothers and their accomplice.

The Deventer brothers first came to attention in 2007, after being caught in the act in Kwa-Zulu Natal’s Hluhluwe-iMfolozi Park. From September 2006 to July 2007, the pair were alleged to have shot 19 rhinos in Kruger National Park, Hluhluwe-iMfolozi Park, and various private game reserves in South Africa. The rhinos slaughtered with guns and bows and arrows included young calves. The pair were subsequently charged with illegally trading rhino horn and the illegal possession of firearms. They entered into a plea bargain in exchange for information on who was running the “Boere rhino mafia” syndicate, and even shared their story with the press before changing their minds; citing threats that had apparently been made against their family.

Ten years ago, when the van Deventer brothers were first arrested, Africa’s resurgent rhino poaching crisis had just begun. During the following years, it became apparent that one driver for this rise was that the changes in trophy hunting regulation in South Africa had allowed pseudo-hunters to obtain hunting permits for criminals, who then leaked rhino horn onto the black market in Asia, particularly Viet Nam, where demand was sky-rocketing. High-level, Afrikaans-speaking gangs were involved in this trade as bogus safari operators. Charges brought against the van Deventers’ alleged “Boere rhino mafia” included racketeering, money laundering and theft, alongside wildlife crimes. But when the brothers reneged on their deal with the authorities, the case against the criminals higher up the chain collapsed.

South Africa subsequently tightened trophy hunting legislation after a report by the CITES Rhino Working Group estimated that approximately one-fifth of illegally traded rhino horn leaving Africa was harvested from “pseudo hunts.” Today, trophy hunting for rhinos in South Africa is tightly controlled and the number of rhino killed through legal hunts represents a fraction of the number slaughtered by illegal poachers. Other so-called “khaki collar” alleged criminals the top of the chain in South Africa include Dawie Groenewald and Hugo Ras. Both trials have been postponed on multiple occasions – in the case of Groenewald, delays have dragged on for six years despite the USA indicting him for wildlife crimes as part of Operation Crash.

Back in 2011, TRAFFIC’s Tom Milliken warned that the judicial focus in South Africa was too often on the poachers and couriers, and not the organisers and facilitators higher up the chain. Milliken said: “the proof in the pudding will be if those South African game-industry white guys who are involved in rhino crime get similar sentences.” The van Deventer brothers currently remain in police custody and are due to appear in court on January 27 to make formal applications for bail. No bail and a prompt trial would go some way to deterring others, and helping police disrupt the wider criminal networks on which the rhino horn trade depends. This time, let’s hope they aren’t released only to reoffend.