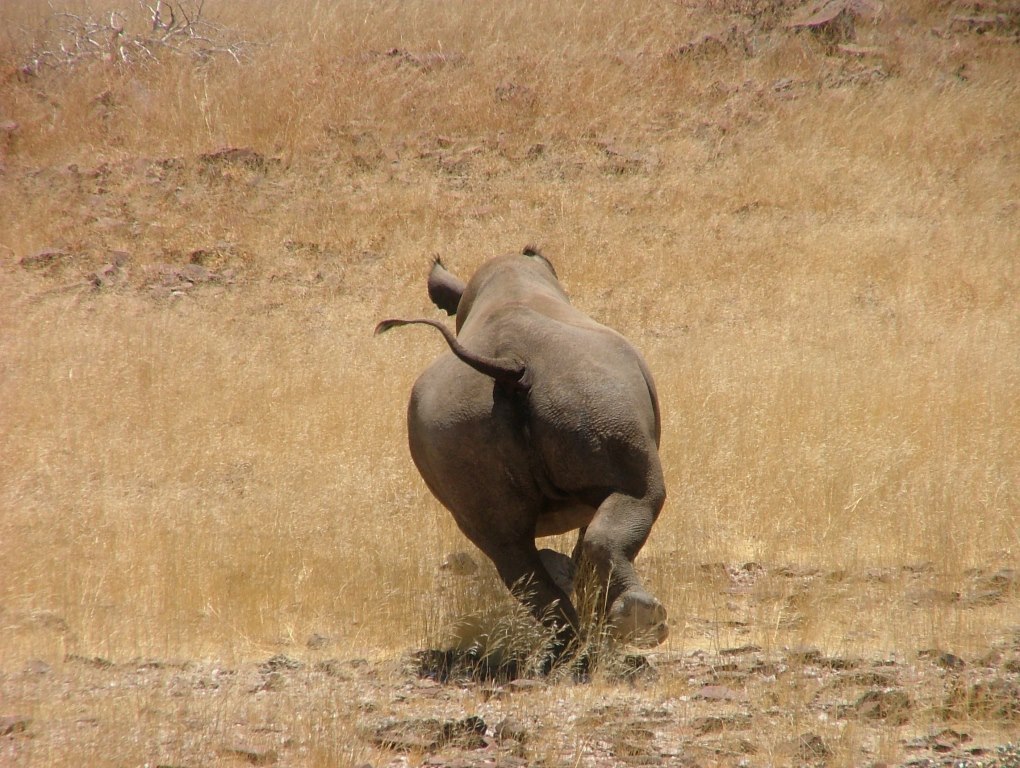 In Namibia, leading environmental organisations have warned that the growth of the country’s Chinese population is leading to devastating consequences for Namibia’s wildlife. In an open letter to the Chinese Ambassador in Windhoek, published on 21 December 2016, Namibia’s Chamber of Environment argues that “until the arrival of Chinese in signifant numbers in Namibia, wildlife crime was extremely low.”

The letter highlights concerns that Chinese economic investment in Namibia is coming at the price of damaging the country’s environment and tourism sectors, and has the potential to create tensions between the indigenous community and 100,000-strong Chinese population. Signed by 40 organisations including Save the Rhino Trust – one of the field programmes we support – the strongly worded open letter says:

We support our government’s policy of attracting foreign investment to stimulate growth, employment and development. And we counter all forms of xenophobia and profiling. However, we expect foreign investors and their nationals to abide by Namibia’s laws, and to embrace Namibia’s cultures, ethics, and values. Too many Chinese nationals have abused Namibia’s environmental laws, and this is causing growing resentment and anger amongst Namibians.

In conclusion, the letter’s signatories call on the Chinese Ambassador and the Chinese government to acknowledge the scale of Chinese involvement in wildlife crime, question whether the actions of some Chinese criminals are “state sanctioned”, and propose that China should “make good” on the huge financial losses that wildlife crime causes the country.

Whilst covering a broad range of wildlife crimes from illegal fishing to pangolin and elephant poaching, the open letter also highlights the growth of rhino poaching. Poaching for rhino horn in Namibia has leaped in recent years as gangs move out of South Africa’s Kruger National Park and into neighbouring provinces or countries.

Namibia is home to the desert-adapted subspecies of black rhino, known as the South western black rhino (Diceros bicornis bicornis). In a document submitted to the CITES Conference of the Parties at Johannesburg in September 2016, the African and Asian Rhino Specialist Groups and TRAFFIC commented that “the geographical drift in poaching to Namibia over the last two years is worrying”, and recommended that the nation be added to the CITES’ Rhino Working Group’s list of countries of “priority concern” as a result of this trend.

61 rhinos were illegally poached in Namibia in 2014, rising to 91 in 2015. Unofficial figures for 2016 suggest that 63 rhinos were killed, a reduction on the previous year but high enough to threaten the growth of the country’s rhino population. Elephant poaching is on the increase. During this time, the Namibian government has responded to the rising threat to the country’s rhinos by creating a new Wildlife Crime Directorate and specialist anti-poaching school. Government anti-poaching teams have also, for the first time, invoked the Criminal Procedures Act, which allows their teams to fire in self-defence against poachers.

The cost of conservation

As long as the numbers of rhinos poached, together with natural mortalities, do not outnumber live births, the future for Namibia’s black rhinos is – guardedly – optimistic. However, the sheer cost of maintaining the security required, and the impact of serious, organised wildlife crime in Namibia, has serious ramifications for conservationists beyond rhino population numbers.

Police Inspector General Sebastian Ndeitunga said on record in December that: “I know it is serious because I am the one who deploys officers on the ground on a daily basis and it is costing the police and country a fortune.” A key paragraph of the open letter criticised the recent announcement from the Chinese Embassy that Windhoek’s Chinese business community would be donating N $30,000 (c. US $2,200) towards tackling wildlife crime. According to the Environment Chamber’s calculations, wildlife crime costs the country an estimated N $811 million (US $59.5 million) per year.

Across Africa, the increased sophistication of poaching gangs – often heavily armed – has seen the cost of rhino conservation spiral to keep up with what has been dubbed the “militarisation” of conservation. Namibia’s Save the Rhino Trust, a key partner of SRI, was one of the first black rhino projects to develop a community conservation arm and generate revenue for rhino protection through well-managed eco-tourism.

The Chamber of Environment’s Open Letter highlights how the illegal wildlife trade is undermining this progress, a view echoed by Lieutenant General Ndeitunga when he acknowledged the role played by Namibians in rhino poaching, by providing tip-offs: “Namibians are paid peanuts to destroy their own fauna.”

In response the Namibian government has ramped up stop-and-search operations at checkpoints, roadblocks and at random. The Minister for Environment and Tourism, Pohamba Shifeta pledged to deport foreign-born poachers:

We want foreign nationals convicted for poaching deported and never allowed back in the country because we have learned that they are fined and go back to engage in the same thing again.

These announcements are reported to have caused consternation among Chinese embassy staff.

According to Namibia’s Home Affairs Ministry, Chinese nationals now account for around 5% of the country’s population. Relations between the Chinese and Namibian government first developed in the 1960s, during Namibia’s War of Independence (from South Africa), when China provided support to the emerging political party SWAPO. Since then, China’s strategy in Namibia is similar to its approach across sub-Saharan Africa: creating economic ties through trade, development finance and large-scale infrastructure projects.

Chinese workers have been attracted to Namibia by public and private sector tenders with relative administrative ease, but their presence has not been without controversy. Recent news coverage has focused on the huge rise in Namibia’s Chinese diaspora as risking ethnic tensions between Namibians and the Asian community. Publications have also highlighted the Namibian government’s role in encouraging Chinese workers – arguing that the government has created a labour market where it is easier for Chinese workers to find employment than local Namibians.

The key driver for the poaching crisis is certainly consumer demand in the key markets for illegally traded wildlife products. There is demand from African nationals for rhino horn for their own use, and instances of rhinos being poached for bush meat are rare, although occasionally poachers cut out the sexual organs of rhinos that they have killed and dehorned, presumably for “muti” to make themselves invisible to anti-poaching units.

In contrast, numerous reports point to both China and Viet Nam as driving the market for illegal rhino horn, where it is used in Traditional Chinese Medicine, as a luxury item, art work or investment piece. Chinese individuals have been implicated in a string of high-profile poaching incidents in Namibia.

Nevertheless, a wide range of actors either actively or inadvertently help the illicit trade to flourish. Poachers are dependent on information about where rhinos are living, and how to find them. When arrested, they often abscond if granted bail. Smugglers are reliant on trafficking routes and transport – by air or sea – and corruption within government agencies creates room for syndicates to grow. For example, 18 rhino horns were smuggled out of the country via the international airport in Windhoek on a flight to Johannesburg, despite being clearly visible on the airport’s luggage scanner (sold to the Namibians by the Chinese in a deal that allegedly involved backhanders to government officials). As a result, the scanner’s operator, Police Chief Abraham Litula, 42, was arrested but has since been granted bail for N$2,000. Furthermore, investigative journalists reporting on Namibia’s rhino horn crisis have highlighted the role of home-grown rhino poaching groups – with Namibians operating at the highest levels. John Grobler, writing for the Oxpeckers, alleges that the majority of Namibia’s rhino poaching gangs are members of the Aakwambahu clan, constituting a “Trojan horse” in the country’s rhino poaching crisis.

Save the Rhino’s view

As long as there is consumer demand, there will always be criminals motivated to poach rhino horn. The interventions that work – strong incentives for communities to protect rhinos, well-trained and equipped rangers with high morale, good monitoring and management of populations and their habitat, and a strong legislative framework to prosecute poachers – are as applicable in Namibia as they are for rhinos in Indonesia or India.

Rhino poaching in Namibia isn’t just due to its Chinese population but, as the open letter to Windhoek’s Chinese Ambassador details, China’s involvement in Namibia’s natural resource management and economic development throws up many questions around how indigenous Namibians can continue to protect and benefit from their natural heritage whilst furthering the country’s wider development.

China has, theoretically, a good legislative framework for prosecuting wildlife poachers and traders. Imports of rhino horn into China were banned in 1981 and exports in 1988, while domestic trade was prohibited and all stockpiles of rhino horn registered and sealed in 1993.  There are signs that recent busts of criminal networks in China are indicative of a renewed crackdown by the Chinese government. As the Namibian Chamber of Environment has identified, the Chinese government does not recognise dual nationality and ultimately has the power to convict nationals involved in Namibian wildlife crimes.

Finding a common path that protects Namibia’s wildlife whilst still encouraging development investment will be both governments’ challenge.