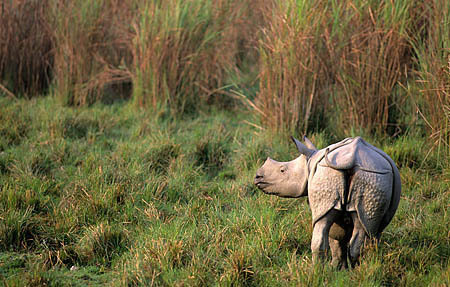 Kaziranga National Park, in India’s North-eastern state of Assam, holds the world’s highest concentration of rhinos. Numbering some 2,000 individuals, the pachyderm population gives the 430 square mile World Heritage Site its status as the historic home of India’s efforts to save the Greater one-horned rhino; a species once prevalent across much of the sub-continent.

Over the last month, the Park has been the location of one of the most high-profile and daring poaching incidents reported since the current poaching crisis began in 2008. During a ministerial visit to assess anti-poaching strategies, a rhino was killed and dehorned just miles away – the second animal killed within the space of a week. The shocking incident precipitated the suspension of the National Park Director, and has raised questions over the security of the government’s rhino horn stockpile and the implementation of the country’s on-going rhino conservation programme.

In recent years poaching has picked up pace in Assam. The province, perhaps best-known for the eponymous tea, is based in the far northeast and shares international boundaries with Bhutan and Bangladesh. The porous border with Myanmar is not far from Kaziranga and provides a transit route for smuggled rhino horn to the key markets of South East Asia; including China and Viet Nam.

In Assam, one of the key manifestos of the recently elected regional Government, headed up by the Bharakiya Janata Party (BJP), was to stop rhino poaching. A central tenet of this vision is to increase viable populations in areas that have previously been hit by poaching, once other regions were secured. At the end of March 2016, a rhino cow and her calf were translocated, seemingly successfully, from the Baguri range in Kaziranga to Burachapori Wildlife Conservancy in Sonipur District. Just under two months later, the team received a huge blow when, after settling in well, the cow died unexpectedly. Preliminary reports suggest that the death was related to pneumonia.

The IRV 2020 coalition is a joint project led by the International Rhino Foundation (a partner of Save the Rhino International), the Assam Forest Department, World Wildlife Fund-India, the Bodoland Territorial Council and US Fish and Wildlife Service. Now, there is an urgent need to plan a way forward for the orphaned calf. Moves are being made to transport a hand-reared young calf from a rehabilitation centre near Kaziranga, to keep the little one company.

Losing the adult rhino was a huge blow to the team, who await the results of the full autopsy to see if lessons can be learnt. Translocation, whilst usually successful, carries risks and places animals under stress which, in certain circumstances, can exacerbate underlying illnesses or undetected issues.

Assam officials under the spotlight

Throughout 2016, so far Kaziranga National Park has foiled several poaching attempts, with 17 arrests made by officials by 19 June, and a further four poacher fatalities. Two high-profile poaching incidents have, however, created most of the headlines.

On 7 June it was reported that a rhino had been killed and dehorned and, furthermore, the incident had occurred during a high-profile ministerial visit to the Park to check on rhino monitoring procedures and anti-poaching strategies. Within a week, another rhino was dead. Only a few months earlier, a rhino had been poached shortly after the Duke and Duchess of Cambridge visited in April.

The incidents caused huge embarrassment to the government and outrage on behalf of the local community and activists. Within days, the Assam Forest Department announced that the Park’s highest ranking official, Park Director Nufakkar Ali had been suspended on the charge that he had been “negligent in his duties pertaining to protection of rhino.” In a formally issued statement, the government later claimed that he was “liable to have tampered with evidence related to the incident of rhino poaching on 7 June by misleading the authorities.”

Assam’s Forest Minister, Pramila Rani Brahma, sent a clear message: “Our government is committed to protecting the rhinos and will take all necessary steps to guard our state animal. Any negligence of duty by our officials will be taken very seriously.” Since then, a serial poacher, Tilak Bora, has been arrested and immediately confessed that he sold the rhino horn poached on the day of the ministerial visit to a customer from neighbouring province Nagaland. Bora is the fifth poacher arrested in connection with the incident, including forest guards. According to press reports, Bora has been arrested and released several times over the years before being released on bail. He was reportedly held by the authorities near the Burmese border in possession of four .303 rifles, one silencer, 24 rounds of bullets, one magazine and one bolt.

Now, as the government looks to uncover the extent of corruption, attention has turned to the security of its stockpile of rhino horn. The local government’s treasury, based in Golaghat, houses more than a thousand rhino horns from natural deaths. On 23 June it was reported that the Forest Minister had formed a team including forensic experts to find out whether the rhino horn strong room is safe and, once confirmed, decide what to do with the stockpile, with public burning of the horn touted as a possibility by local media.

Vulnerable – but not Critically Endangered

Despite intense media speculation and the shocking timings of Assam’s spate of poaching attacks, Kaziranga is still a conservation success story and, although it ended in tragedy, the attempted translocation exemplifies the huge gains made by conservationists working with this species of rhino.

In 1905 the Park had just 75 rhinos and 300 by the 1960s. In 2016, there are more than 2,000. In total, there are around 3,500 animals across their remaining range in India and Nepal, meaning the species is classed as “Vulnerable”; the only one of the three Asian rhino species not labelled as “Critically Endangered” by the IUCN. In a recent interview, Dr Bibhab Kumar Talukdar, a wildlife biologist and Asia Coordinator of International Rhino Foundation, put current events in context:

“Failures and successes are part of any fight against illegal activities. Often failures are highlighted in media, while the successes are not often reflected. I think the greatest success of the Assam Government is the steady increase in rhino population from mere 20 or 30 in the beginning of 19th century to about 2650 rhinos currently…One of the greatest strengths in rhino conservation in Assam is the growing awareness and protective feeling amongst the common people of Assam. Without their support, rhinos would have become extinct long back.”

Nepal, which also is home to the Greater one-horned rhino species, has won plaudits in rhino conservation and rapidly established itself as conservation and anti-poaching leader. In May 2016, the country celebrated its second year in a row with zero rhino poaching. Three years out of the last five have achieved this feat. This announcement was just in time to coincide with the issuing of the country’s new bank note; featuring a rhino and its calf on one side.

Nepal, like India, is pursuing translocations for some of its rhino population. Translocation is not without its controversies, but the process is vital in ensuring genetic diversity, repopulating traditional rhino ranges, and utilising better-suited habitats.  The last translocations attempted between the two saw 70+ rhinos relocated between 1985-2003. As of 2015, only 29 survived in Bardia, with media reports and campaigners identifying security issues during the Maoist regime, regional flooding, and limited ranger resource, as likely factors.

This time round, although some activists attempted to block a plan to move up to 30 rhinos from Chitwan National Park to Bardia National Park, around 150 miles away, the translocations went ahead successfully, with no deaths incurred during the move itself. Investment in the training of park staff in rhino monitoring and anti-poaching patrols has assuaged many concerns. However, another threat has now come to light. Shortly after the first of the current wave of translocations in February 2016, it was reported that one of the animals, a female rhino, had been displaying signs of illness. In early March she died, with the cause of death identified as tuberculosis (TB). This is the first-ever case of TB found in a rhino. How and where the disease was transferred is being investigated – with a range of implications for future translocations.

All in all, a mixed picture for the Greater one-horned rhino.