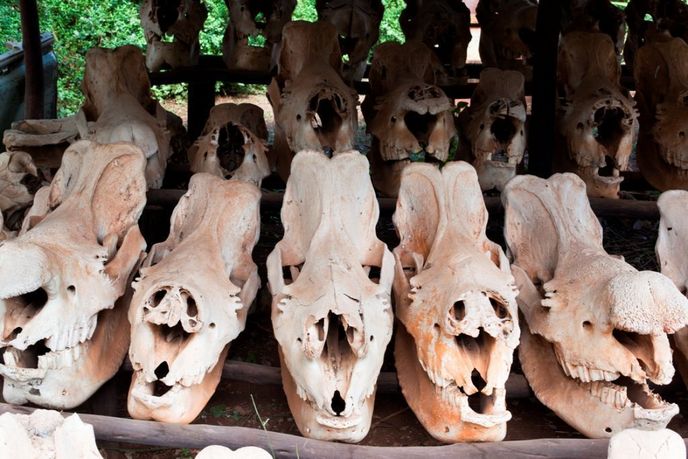 The South African Department of Environmental Affairs has just released the latest shocking poaching statistics from South Africa, which show that a record 1,215 rhinos were illegally killed in the country last year. That’s one rhino poached every eight hours.

This means another grim rhino poaching record has been set for the eighth consecutive year. Back in 2007, just 13 rhinos were poached for their horns, but since then a total of 3,886 rhinos have been slaughtered in South Africa alone, an increase of over 9,300%.

Depending on the rate that poaching increases, and also the breeding rate of rhinos, overall rhino deaths could overtake births sometime between 2015 and 2021, which would push rhino populations into decline. If poaching continues to increase at current rates, rhinos could be effectively extinct in the wild as soon as 2026, in just over ten years’ time.

Why is poaching increasing?

Rhinos are being slaughtered for their horns by ruthless criminal syndicates. The horns are mainly trafficked to Asia, where they fetch huge prices on the illegal black market. The demand for rhino horn has soared over recent years, especially in Vietnam, which has been identified as the largest user country of rhino horn. Although rhino horn has no scientific medical benefits, consumers are using it to treat a wide range of conditions, from cancer to hangovers, and due to its high value it is now also used as a status symbol by wealthy individuals.

The rapid escalation in the black-market price of rhino horn has led to the involvement of well-organised criminal syndicates, the same groups behind the trafficking of other illicit activities such as arms and drugs. The huge sums of money involved facilitate corruption and entice young unemployed Mozambicans into risking their lives to kill rhinos and bring back their valuable horns. It is thought that Mozambican poachers are involved in 80-90% of poaching incidents in Kruger National Park.

The official South African statistics show that 386 people were arrested last year in connection with rhino poaching, an increase from 343 the previous year. However nearly all of these arrests (374 individuals) were ‘level one’; the poachers on the ground who are easily replaced by those orchestrating the poaching syndicates. There were only 12 arrests higher up the chain from ‘levels 2-5’ representing the receivers, couriers, buyers and exporters.

One of the most notable arrests of 2014 was the apprehension 10 members of a suspected rhino poaching gang, led by the alleged kingpin Hugo Ras, following a year-long operation by the Hawks. The syndicate is believed to be responsible for the slaughter of 24 rhino between June, 2008 and June, 2012. The group faces a total of 318 rhino poaching-related charges. However it was recently announced that eight of the accused have been released on bail while Hugo Ras and his brother-in-law, Abraham Smit, remain behind bars. There is a concerning slowness to these high level convictions.

Another successful sting in December resulted in the arrest of a 45-year old man said to be the kingpin of rhino horn poaching in KwaZulu-Natal, following an eight-month intelligence-led operation.

On an international level in December, 16 members of a horn smuggling syndicate were arrested in Prague, Czech Republic following the successful outcome of cross-border cooperation between affected countries as well as transit and end-user countries to tackle the illicit trade in rhino horn.

However despite these arrests, there is grave concern over the judicial sentencing and corruption amongst law enforcement officials. For example a police officer who was allegedly caught in possession of rhino horns during a sting operation has been released on bail for just R500 (£30).

What is the South African government doing?

During a media briefing, Edna Molewa, the South African Minister of Environmental Affairs, gave an update on the progress of activities undertaken to halt the rhino poaching crisis.

This included an update on rhino translocations, which has involved moving rhino from areas in South Africa where they are under threat, to more secure locations. During the last quarter of 2014, 56 rhinos were moved out of poaching hotspots in Kruger National Park to an Intensive Protection Zone (IPZ) and other more secure areas.

In addition, approximately 100 rhinos have been translocated to neighboring States through both private partnerships and government initiatives. The Minister said none of the monitored animals moved to the IPZ have been poached.  Further rhino translocations are planned for 2015.

The Minister explained further strategies including:

You can read the full statement from the South African Department of Environmental Affairs online here.

Can we stop the poaching crisis?

There is no silver bullet to combat the rhino poaching and a range of strategies are needed on a global scale. International collaboration is essential to crack down on the criminal syndicates involved in wildlife trafficking.

2015 will see particular pressure on Mozambique to deliver its commitments outlined by CITES (The Convention on International Trade in Endangered Species), with a notable deadline of 31 January 2015 to deliver its report on progress made.

As well as supporting rhino conservation programmes on the ground, through 2015 Save the Rhino will continue to support innovative behaviour change campaigns to reduce the demand for rhino horn in Vietnam. These demand reduction schemes are essential to reduce the rhino poaching threat.

Recent history has shown us that rhino demand reduction in Asia is possible and has been successfully achieved in many different countries such as Taiwan, South Korea and Japan where rhino horn was popular in the 1970s-80s. We are confident that this can be achieved again.

Daily Maverick: The Fight to save SA’s rhinos: what the Minister didn’t say