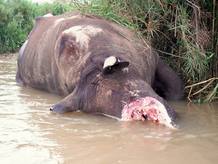 This week (20 Nov), the horrific news has been announced that 1,020 rhinos have been killed already this year in South Africa, overtaking last year’s total of 1,004. Kruger National Park has been hit the hardest; approximately two-thirds of South Africa’s rhinos have been killed there. South Africa, which has by far the largest population of white rhinos, has seen an escalating poaching crisis since 2007 when only 13 were killed.

Rhinos are being killed for their horns, which fetch high prices in the illegal wildlife market in countries like Vietnam where it is perceived as a status symbol. Rangers on the ground now have to tackle armed and trained poaching gangs on a daily basis, risking their own lives in the fight to protect rhinos.

Although arrests have increased in South Africa, this has not, yet, had an impact on the number of rhinos being killed as the majority of arrests have been of Level 1 criminals (the actual poachers), with only nine Level 4 criminals arrested. Their court case is yet to be heard.

The future for African rhinos does look bleak. Depending on the rate that poaching increases, and depending on how well rhino populations continue to breed, overall deaths could overtake births sometime between 2015 and 2021. Important steps are underway to reverse this projected decline – such as increased law enforcement efforts and behaviour change campaigns in Vietnam, the main user country – but more is needed, particularly pressure on Mozambique to comply with the requirements laid down by CITES to tackle its role in the rhino poaching crisis.