You are here: Home » News » Updates from the field 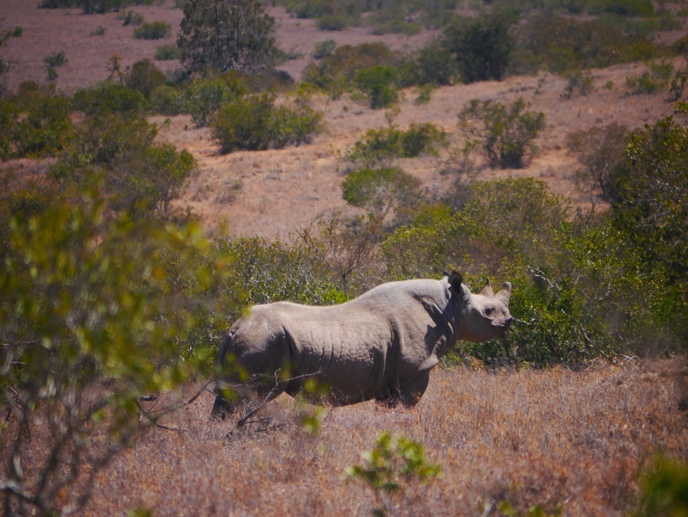 Read some of the highs and lows from the field programmes we work with in Africa over the past month.

In June last year, poachers shot a female black rhino and her young 13-month-old calf in Kenya’s Chyulu Hills National Park. Despite intensive attempts to rescue the calf at the time – working around the clock, with helicopters and the Kenya Wildlife Service, the young rhino disappeared and was feared dead. At this age, he was unweaned and totally reliant on his mother.

“He looks ok, the wound has healed and his condition shows that he has defied the odds and eked out an existence without his mother’s milk. He is not out of the woods yet, but over the worst. He should now be able to defend himself against hyena and other enemies of his world.”

The team has named the calf Bahati meaning ‘’Good luck’’. Read more on this story from the Big Life Foundation.

On Friday 13 March, two Southern white rhinos were found dead at Kenya’s Ol Jogi, the cause of death being gunshots.

The rhinos were two sub-adult males, named Baraka and Riziki, aged 3.5 and 2.8 years respectively. Riziki’s horns were taken but the poachers did not manage to take Baraka’s. A full investigation is underway into the poaching incidents and security has been even further intensified.

Since the rhino sanctuary was established in 1980, Ol Jogi had not lost a single rhino to poaching until four were killed in 2012. Last year, Ol Jogi lost nine rhinos to poaching. In June 2014, Save the Rhino helped respond to Ol Jogi’s emergency funding request to provide funding for 30 new recruits to equip them with the skills to deal with potentially life-threatening situations while in the field.

Good news from Borana Conservancy, which announced the birth of a black rhino calf on Tuesday 14 April: the first calf conceived on Borana since the rhino reintroductions in August 2013.

Finally, congratulations to the Running for Rangers team of Pete Newland (51 Degrees Ltd), Joss Craig (Lewa Wildlife Conservancy), Sam Taylor (Borana Conservancy) and Hollie Woodhouse and Jacqs Manson, who successfully completed the 2015 Marathon des Sables: 250 gruelling kilometres across the Sahara Desert to raise funds for ranger equipment. You can donate to support their epic challenge through this link.

Rhinos were poached to extinction in Zambia during the 1970s and 1980s and declared extinct in the country in 1998. But starting in 2003, black rhinos have been gradually reintroduced to the North Luangwa National Park with incredible hard work from the North Luangwa Conservation Programme (NLCP). Save the Rhino’s patron Simon Barnes recently visited the programme and has written an excellent article on Newsweek about the challenges and successes the programme has faced.

One thought on “Updates from the field”