You are here: Home » News » Training to be a rhino scout isn’t easy 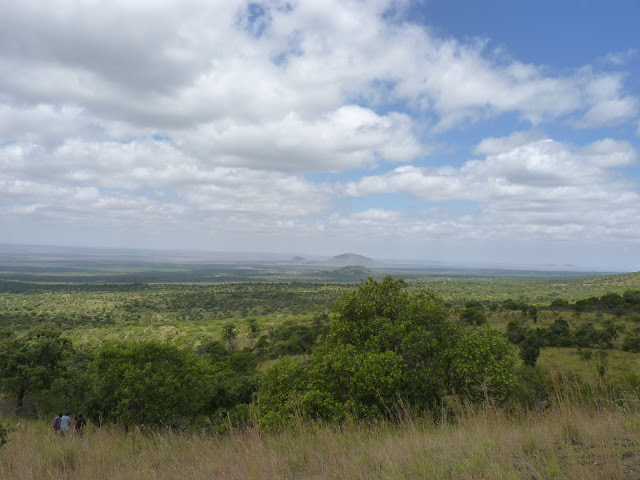 Have you ever wanted to be a rhino scout, living in the great outdoors tracking rhinos and having adventures? Well, I was off to learn what it was really like to be a rhino scout in the Chyulu Hills where Big Life Foundation run its game scout and rhino programme. The Chyulu Hills have been visited several times by members of SRI but this was my first time and I was incredibly excited.

I was met by Friederike von Houwald in Nairobi airport as we were visiting the programme together, Friederike is the curator at Basel Zoo and the EAZA Rhino TAG co-ordinator, as well as recently appointed patron of SRI. We drove for several hours to the Chyulu Hills where we were dropped off at the last turn off from the main tarmac road (if we kept going we would have ended up in Tanzania). We were met by Samaka, one of the rhino scouts, who drove us into the heart of the Chyulu Hills, where we were able to get the first glimpses of the breathtaking landscape.

We stayed at Llewellyn Dyer’s home

(Field co-ordinator and son of Michael Dyer from Borana) whose home looked out onto the expanse of the Chyulu Hills; Llewellyn was to be our guide for the next few days.

After cleaning ourselves up we drove down to headquarters office where we met Patrick Maina (Accountant), Samar Ntalamia (Programme manager) and Joseph Katoke (Head of the rhino game scouts). Everybody was very welcoming and we were very excited to be spending the next couple of days getting to know the team better.

After a good night’s sleep, we were driven to headquarters where we were joined by Joseph and one of the general game scouts as we were going to visit a local Maasai family who had called in a conflict issue: a cheetah had killed 12 of their goats. The compensation scheme works as follows: if a predator has killed one of the local community member’s livestock they are compensated by Big Life (only 42% of the value of the animal). The kill has to be verified by Big Life to ensure that the goat was killed by a predator and that the herder was behaving responsibly. This scheme is designed to prevent the local people carrying out revenge killings on the lions / cheetahs / leopards and other predators in the local areas. The local Maasai used to hunt lions as a right of passage into adulthood and are seen as pests that should be killed but, due to the compensation scheme, people’s attitudes have started to change. This has also meant people in the local community have seen the work that Big Life do in a positive light and so helps all of their work including the rhino work, which relies heavily on information from the local community.

It was a 2hr drive to get to the family where we walked up a steep hill to find 12 dead goats spread around the hill over a 1km area. The scout and Joseph verified the kill as a cheetah kill, gave the family a credit note and took photos for evidence. This compensation is important for the family’s survival and the survival of the local wildlife.

After a very hot journey back we went to visit the lodge, Ol Donyo Wuas that is in the area. The Lodge’s guests’ fees go towards supporting the programme as its guests come to see the amazing variety of animals that Big Life works to protect. We were able to go down to an elephant watching platform where the elephants were enjoying some shade and drinking from the man made water hole that had been created. One of the elephants was carrying a wound as it had been attacked by poachers two days before but thankfully had escaped with its life. The Big Life team had managed to track and dart it so the arrows could be removed and the wound cleaned to prevent infection. Luckily the elephant was doing well after the treatment and was certainly enjoying his drink. In the fabulous setting, it is just a reminder what the team here are facing every day. Although poaching is increasing across all of Africa, through the hard work of the game scouts and the increase in manpower, poaching is actually on the decrease. This as a result of a combination of all of the programme’s projects working together to enable the game scouts to protect the local wildlife.

The next day we were driven to visit the main rhino scouts’ camp. SRI has supported this programme since 2003, where there are 10 specialised rhino scouts whose full time job is to monitor and protect the rhinos. Joseph led the scouts in a parade that was fantastic to watch. Afterwards we were able to introduce ourselves and then chat to the scouts as a few of them spoke English and could translate to the others. They were extremely friendly and wanted to know all about me and Friederike. All of the scouts knew that SRI supported them and they passed on their thanks for our support. I talked to them about their jobs and they all seem to enjoy it, it was very prestigious to be a rhino scout as they have to be very fast and fit to do the role, I’m not sure I would actually pass the tests. The scouts were very articulate and passionate about their job. The scouts work for 3 weeks straight living in camp and then get one week off to go home; there are 3 rhino scout camps around the rhino area. They travel in teams of 3-4. One scout must always stay in camp. The scouts are currently not armed but the Kenyan government is changing this and will be giving out licences to allow certain scouts the equivalent powers to the police, including being able to carry a firearm. This will make a massive difference to the scouts’ security when encountering poachers that are armed. The majority of poachers still use spears and snares but guns are becoming more prevalent.

We discussed the difficulties in the role and they explained that it is dangerous work. Almost all of them had been charged by a rhino at some stage, which shows what a dangerous job it can be. The terrain is incredibly difficult, so much so that their boots and uniforms need to be replaced every 3 months as they get ripped and broken. After visiting the scouts, we were taken into the rhino area to see the rough terrain for ourselves and I could see how important it was for the scouts to have good boots and uniforms to protect them, it would be impossible to walk in these areas without them. The difficult terrain makes both safer for the rhinos but also more difficult for the scouts to monitor them.

After visiting the scouts, we went to KWS base, which hosts both KWS and several Big Life game scouts and where there is a waterhole pump that SRI donors helped to fund to feed water into the rhino area. This means the rhinos don’t need to come out of the more protected areas to find water and increase the risk of being poached.

All in all it was a fantastic day and incredibly useful to be able to see the challenges the scouts face each and every day, I was especially touched by how committed they are. It was great to see how much SRI’s money has benefited such a vital programme.

On the Friday I was able to spend some time in the Big Life office to meet all of the office staff and learn more about the fantastic work they do and more about the rest of the work that Big Life does. I met with Patrick Maina who is Big Life’s Accountant, Samar Ntalamia who is the Programme manager, Antony Kasanga, the Information officer, and Francis Legei who is in charge of all of the game scouts. All of the team were incredibly articulate, knowledgeable and very passionate about their work and so positive about the support they receive from SRI. I enjoyed getting to know the team and understand more about all of Big Life’s other projects. Some of their other projects include sponsoring students, the predator compensation scheme,   their Maasai Olympics plus many more projects. You can read more about Big Life’s work with SRI here.

That evening we had a party in the mess hall with the staff where they surprised us with a performance by some local Maasai warriors. It was an incredibly special and emotional evening as we knew the next day we would have to leave our new friends. It was a fantastic trip as I got to meet so many amazing people and really learn what an amazing job the whole team are doing in Big Life to help protect their rhinos.