You are here: Home » News » Roaming with rhinos in Namibia 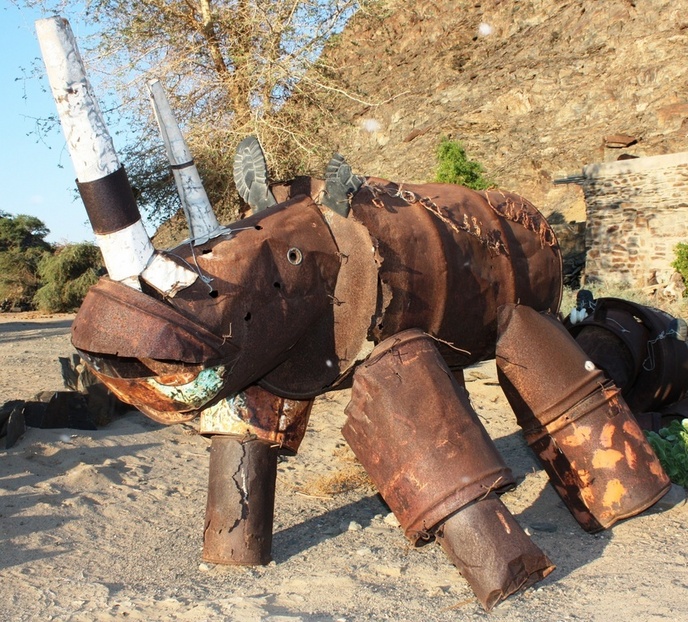 As the Michael Hearn Intern, I had the incredible experience of spending a month with Save the Rhino Trust (SRT) in Namibia. Since their formation in the 1980s, at a time where the desert black rhino population in Namibia were on the edge of extinction due to poaching and drought, SRT has worked hard to help protect this unique species. With the support of a range of stakeholders in the area, such as the Ministry of Environment and Tourism and local communities, SRT monitor and protect the largest truly free-ranging population of black rhino in the world.

I travelled down from the capital Windhoek to ‘sunny’ Swakopmund. In fact, Swakopmund was grey and foggy following the south west winds that come in from Antarctica. It was exactly as you’d picture London; not quite what one would expect after travelling more than 5,000 miles to Southern Africa, but home from home at least. I was met by Sue, Save the Rhino Trust’s Fundraising Manager who settled me in and showed me the sights during the first weekend.

During my first week at Save the Rhino Trust’s office in Swakopmund I quickly learnt that whilst my geography degree has not provided me with an innate sense of direction (I must admit I got terribly lost cycling to my first day front at work), it did teach me about Geographic Information Systems (GIS). Whilst I racked my brains to remember mapping, Jeff, SRT’s Director of Research and Evaluation, explained how they are examining human induced disturbance of rhinos and using GIS to digitally map the routes taken by all the vehicles in areas which SRT works. The routes are then layered on top of each other in one big map and then programmed to show which areas have the highest density of vehicles. Save the Rhino Trust can then use this map to see if vehicle activity disturbs the range in which rhino roam, through forcing them to move into other areas. The desert adapted black rhinos in the Kunene region of Namibia are unique in that they are free-ranging, roaming across community areas called conservancies. Whilst the rhinos are free roaming, so are the vehicles, and uncontrolled tourism is a big problem in Namibia as people drive and camp off road in areas near rhinos and other game species. Under a pile of papers I spent a few days inputting all the vehicle routes onto the programme and couldn’t wait to see the places and travel the routes myself with SRT’s teams of trackers.

At the weekend I prepared for two weeks in the field or ‘bush’ as the trackers call it. Bernd, SRT’s Director of Security Operations and Services came to fetch me on Sunday morning and we set out with Alma and Allen (who work at SRT) for Ugab camp, an afternoon’s drive away. Luckily I love a good journey. In Namibia it is perfectly normal to travel for hours on end, with a three hour drive considered a short one. As we drove away from the fog we soon hit the desert and the hot east wind. The roads are tough to drive on, uneven and rocky. One flat tyre change later, we arrived at the camp.

After staring at the stars and enjoying a simple dinner, I headed straight for bed. The next morning was an early start, as I travelled with Bernd and the trackers Fulai, Johannes and Allen along steep and rocky roads. SRT protects desert black rhinos by monitoring and patrolling a huge area of 25,000km². We joined Simson, SRT’s Director of Field Operations, and some Community Game Guards who are from the local areas. SRT trains the Community Game Guards in tracking and monitoring the black rhinos to help them protect the rhinos in their conservancies. The Community Game Guards join SRT’s tracking teams as they travel huge distances to find all their rhinos. With a big group, we set out to do some scene of the crime training. If the trackers or Community Game Guards were to discover a dead rhino, they are to treat it as an illegal hunting case. This is important with the current poaching threat; 618 rhinos have been poached this year (up to 5 September 2013) in South Africa alone. Bernd and Simson provided us with lots of training and it was great to have the opportunity to see some of their work in action. Capacity building is integral to the work of SRT, as they share skills with their trackers and Community Game Guards. The conservancies (local communities) are custodians of the rhinos and SRT work with MET to support them by enhancing their skills and understanding of rhino conservation.

The following day I went on my first patrol with Bernd and his team. We left early and drove along ‘divorce pass’ named for the difficult driving up the steep mountains. Johannes and Allen sat on the back of the Landcruiser and looked out for fresh rhino tracks called spoor. Around 11am they spotted some, and we all jumped out to follow the route. The trackers try and follow the tracks and look out for other signs that a rhino ambled through the area, from chewed Damara Euphorbia plants to overturned stones. It was incredibly hot and difficult to walk across the mountainous landscape in search of the rhino. After hours of walking, scanning the surface and horizon for clues I thought we might be out of luck. Suddenly, from the bushes, a bull named Mike emerged. I couldn’t quite believe how such a large creature could’ve hidden himself so well! I stayed stuck on the spot in awe, wishing I had my camera in my hands. Although rhinos’ eyesight isn’t good, they have a great sense of hearing and I didn’t want to rustle through my rucksack. It was an incredible experience standing so close to a truly wild rhino, one that wasn’t confined by fences but free to roam. What made this first patrol sighting extra special was that the rhino Mike was named after the late Mike Hearn, who worked for SRT as the Director of Research and in whose memory our internship programme was established.

I also joined the North West Wildlife Security Workgroup meeting with lots of different organisations involved in the protection and security of rhinos in the area. It was great to see how all the stakeholders work together. That evening I had dinner with Sebulon, Save the Rhino Trust’s Principal Tracker and his team and tried to learn some of the many clicks in the Damara language.

Another day I was lucky to join an early morning patrol with Sebulon, Manfred, Justus and a Community Game Guard, where we had a chance sighting of a rhino and her calf. SRT take Community Game Guards on patrols and provide training and support in tracking skills and responsible viewing of the rhinos. These skills can be used when Community Game Guards take out tourists who visit their local area and are keen to sight the desert adapted black rhinos. Tracking rhinos is no easy job, especially that morning when their tracks were covered by a herd of desert elephants who had walked through the area earlier! I watched as the trackers recorded their sighting, from checking the condition of the rhinos to using their horn and ear shape to identify which rhinos they saw. All this information is added to a database of the rhinos in the area, which helps biological management of the population.

Two of Save the Rhino Trust’s trustees drove up to see all the rhino camps with Sue, and I joined them on their long weekend tour meeting everyone at each camp. I was able to greet some familiar faces whom I’d said goodbye to only a day or two before, and meet a few new ones as we visited the Mounted Patrol Team camp whose trackers use camels, donkeys and mules to carry out rhino monitoring in very mountainous terrain inaccessible by vehicle. On Saturday we had a night of luxury at Desert Rhino Camp followed by an early morning game drive and a great sighting of a rhino and her calf. Save the Rhino Trust has a joint venture agreement with Wildness Safaris and they take out tourists to responsibly view the rhinos in the area. I loved how the rhino and her calf were oblivious of our group and ambled off when they felt like it.

My time here has changed me, not just visibly in which a fleece and hiking boots have become part of my attire but I have had the opportunity to experience first-hand the rhino conservation work carried out by Save the Rhino Trust. I learnt so much about the challenges of working in such a vast area, and the hard work Save the Rhino Trust put into protecting the unique desert adapted black rhino found there. I would like to thank Sue, Jeff, Alta, Bernd, Simson, Sebulon and everyone at Save the Rhino Trust who made my visit so special.