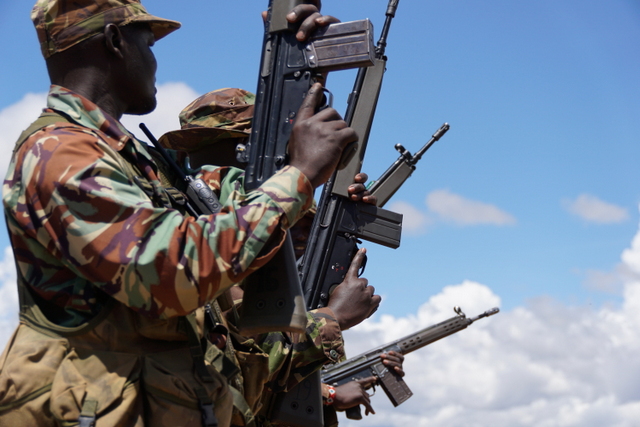 Ranger training for those working in rhino conservation areas is absolutely vital and takes many different forms. Rhino identification skills are needed, so too – in this age of rhino poaching – are weapons handling and battlefield medicine. All the rhino conservancies in Kenya carry out regular programmes of commander cadre and refresher training, so that the anti-poaching units stay sharp and safe in the event of any incursions.

One such course was underway while I was visiting Borana, so I went to see what was happening. After introductions to the rangers from Borana and Lewa over a mug of tea, it was time for them to resume the contact drills: rehearsing for the event of walking into an ambush by armed poachers or cattle rustlers. I was allowed to run along behind, staying close to the instructor, and watched the patrol team organise itself into providing cover as each team member peeled back to get safely out of the “kill-zone” – the radius within which shots are most accurate and likely to hit their target.

In this case, the ambush site was nothing more deadly than a large water container concealed within some bushes, but the exercise was made more real by the fact that the ammunition being used was live. The instructor explained that one of the major parts of being able to extract safely from an ambush zone is knowing how to do so without shooting a fellow team member in a “friendly fire” incident. Rehearsing such scenarios via live fire contact drills gives the training the edge it needs, so that in a real-life situation, the rangers remain calm and steady, and do not panic. Guns firing blanks recoil differently to those firing live ammo; again, it’s vital for the rangers’ safety that they’ve experienced live-fire situations in a safe setting before they risk encountering the real thing.

At the end of each drill, we came together for a debrief: had there been enough communication between each patrol member during the exercise? Had each member provided effective cover for the next in line? Was anyone unnecessarily put at risk?

No one wants to end up in a live-fire situation: rhino conservancy staff would much prefer that they have developed such good relations with surrounding communities that they are tipped off before any incursions take place, and that would-be poachers can be arrested by the police long before they enter a protected area. But, given the high level of sophistication among the criminal syndicates that are targeting rhinos, elephants and certain other wildlife species, it’s essential to be prepared.

The most sobering thing I learned that afternoon was that every ranger carries their own blood-bandage and tourniquet, in their left-hand breast pocket, at all times. If one of them is shot, he or the rest of the team can immediately find the bandage that might save his life.