You are here: Home » News » A rhino orphan named Kitui at Lewa 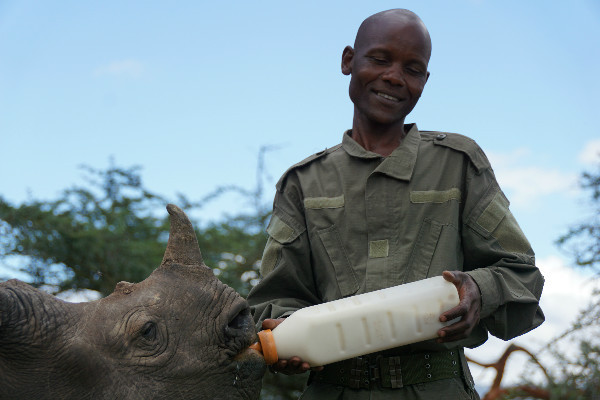 This morning, after catching up with Antony Wandera, from the Northern Rangelands Trust, and with Geoffrey Chege, Lewa’s Head of Conservation and Wildlife, to discuss our perspectives on the national rhino strategy workshop, it was time to see another rhino (the 20th I saw on Lewa in two days!).

In the past, Lewa has hand-reared rhinos for a number of reasons: sometimes the mother is blind and unable to look after her calf; occasionally the calf needs veterinary treatment and must be brought into the bomas; or, very rarely at Lewa, a calf is an indirect victim of a poaching attempt that kills the mother. Recently, the policy on caring for orphaned rhino calves has changed: in future, calves north of the Equator requiring hand-rearing will be taken to Serara up in the communal conservancies that form NRT; while those south of the Equator will go to the Daphne Sheldrick animal orphanage in Nairobi. The calf we met, Kitui, is therefore probably the last rhino calf to be hand-reared at Lewa.

First we picked up one of Kitui’s keepers, Elias Mugambi. Elias has been at Lewa for six years. At school in Meru, he was a keen member of the wildlife club, and after leaving school he did a succession of small jobs. Then he heard that Lewa was recruiting rhino monitors and he applied; his demonstrable enthusiasm for wildlife got him in. Now he works with Kitui, who needed care because his mother, Mawingo, is blind.

Kitui is now two years old but still loves his bottle of milk. His daily supply has been reduced from six bottles a day down to three, and he demolished his lunchtime feed – bottle-fed by Isaiah Gitonga – in less than two minutes. Kitui is now old enough that during the daytime, he can browse for his own food in a large section of the forest near the swamp area in Lewa. His keepers cut additional browse for him to eat during the night, when he is locked up safely in a boma. He’s still not big enough to be outside day and night on his own; just after we waved goodbye to Kitui and Isaiah, who walked off down the track together, we spotted a young male lion, sheltering in the shade of a large bush, just a couple of hundred metres away from where we’d been.

Elias said that although he’s a bit sad when the rhino calves are old enough to be completely released into the wild, he’s also very proud and happy: the wild is where they are meant to be.